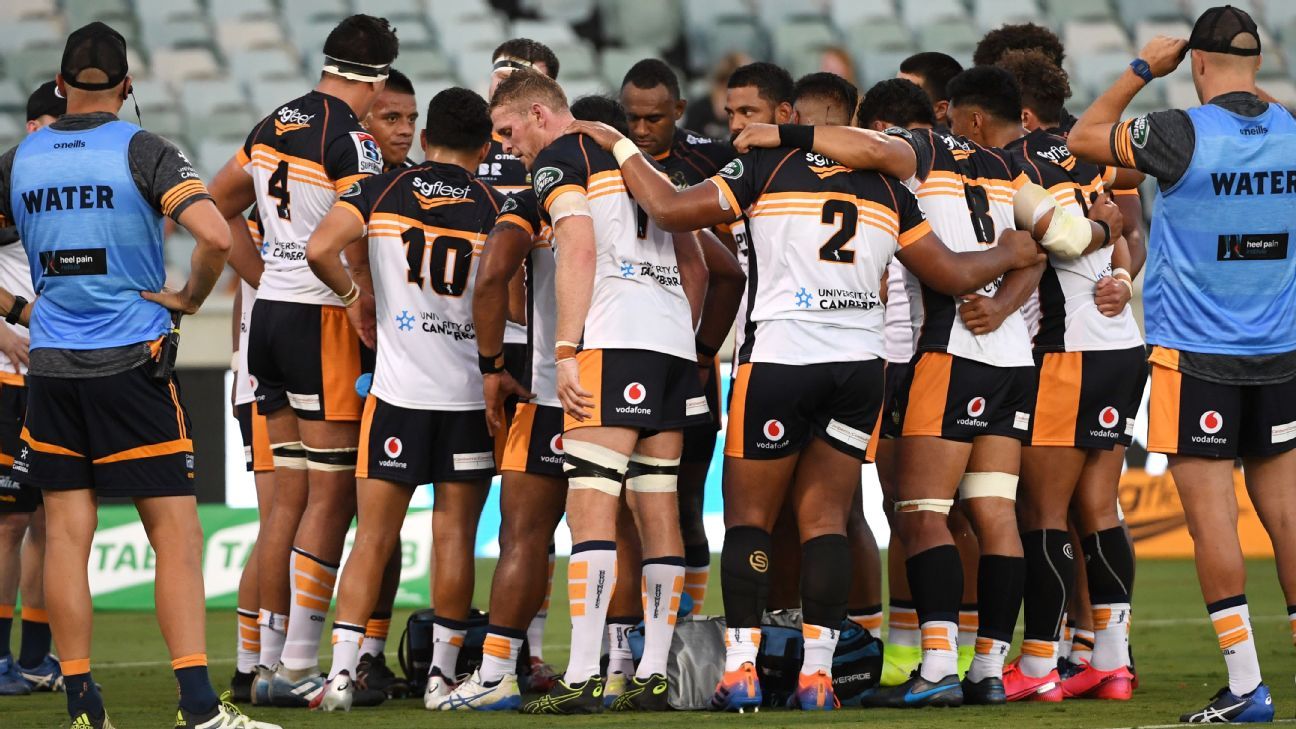 The 2020 Super Rugby season is up and running after an intriguing Round 1 that saw wins for the Chiefs, Blues, Sharks, Sunwolves, Crusaders, Stormers and Jaguares.

THE GATLAND-CRUDEN SHOW IS HERE

It hasn’t taken long for Warren Gatland to make his mark on Super Rugby.

The former Wales coach got off to a winning start in the season opener on Friday, his decision to stack his bench proving a masterstroke as the Chiefs overturned a 19-5 halftime deficit to run out 37-29 winners in Auckland.

There had been much to like for the home fans – who have long been starved for success – across the opening 40 as the Blues ran in three tries, including a double to All Blacks winger Rieko Ioane.

But the momentum changed swiftly upon the resumption when returning All Blacks playmaker Aaron Cruden was introduced, so too star centre Anton Lienert-Brown, prop Angus Ta’avao and, later, scrum-half Brad Weber.

Cruden proved the cool head the Chiefs had lacked across the first 40 as he nailed a penalty, three conversions and a late drop goal, the fly-half also throwing a delightful pass for Solomon Alaimano’s five-pointer that gave the visitors the breathing space they needed.

Gatland was told he had to manage the All Blacks’ World Cup starters and he did so by sending skipper Sam Cane out in the first 40 and Lienert-Brown on after the break, staggering his Test experience superbly in the process.

“We were looking to bring Aaron on a bit later,” Gatland said,

“But we wanted to get those two guys (Cruden and Lienert-Brown) on and we felt that was important, in terms of that experience and I thought our bench was great.

“I was pleased with a lot of people in the squad, we got much better and more accurate.

“The scoreboard in the second half probably reflected that.”

Four of the Chiefs’ five tries were scored by forwards but that won’t concern Gatland one bit given he was forced to scratch Damian McKenzie on match eve and the Chiefs backline still managed nine clean breaks as it was; including two each to Cruden and Lienert-Brown.

Any suggestion that Gatland might take some time to adjust to Super Rugby should be left in Round 1 and a mouth-watering coaching battle now awaits this week as the Chiefs host the Crusaders.

The opening round of Super Rugby in Australia was more sizzle than bang over the weekend, with small crowd numbers, the Waratahs and Rebels losing on the road, and temperatures soaring as the season kicked off in January for the first time.

While the mercury tipped only 24 degrees in Auckland on Friday night, heatwave conditions confronted the Brumbies and Reds in Canberra that same day. The mercury rose to 41 in the Australian capital before dipping to 39 ahead of kick-off as bushfires burned just 10km away.

Jerseys were soaked in sweat within minutes of kick-off, the slippery ball hard to handle as players endured the steamy conditions. Although no-one was forced from the field, World Rugby’s heat policy was implemented with a two-minute drink break taken at the 20-minute mark of each half.

The continued smoke haze of the summer – the result of bushfires that have burned a third of the Australian Capital Territory, had forced SANZAAR to implement air quality guidelines just two days before kick-off. Fortunately, the policy didn’t have to come into play.

But Brumbies coach Dan McKellar didn’t hold back in criticising the decision to launch the season in the middle of summer, labelling the conditions “dangerous”.

“We talk about player welfare, we’ve got big men having to run around and they’re in good condition but I’m hoping round one next year is not anywhere near January 31,” McKellar said.

“You’re limited with your preparation time and it’s dangerous, it really is.”

Brumbies captain Allan Alaalatoa added: “Yeah it was warm and we definitely felt it”.

As it was, the Brumbies emerged 27-24 winners to get their season off to a winning start. The Aussie derby was played at a high-octane level and included seven tries; an even forward battle allowing each side’s young fly-half, especially the Brumbies’ Noah Lolesio, to impress.

In his Super Rugby debut, Lolesio recovered from an edgy start to right the ship and help lead his side to a second-half revival. His slick inside ball to Tom Banks, 40 metres from the line in the 66th minute, capping off a fine first Super Rugby outing.

Reds fly-half Isaac Lucas produced two of his own try assists, a nice inside ball putting Henry Speight over the before Lucas then put Bryce Hegarty in just before the break.

Interestingly, it was the Brumbies’ front-row that was tested. Their set-piece struggled early in the match, Scott Sio, Folau Fainga’a and Alan Ala’aatoa dominated by the Reds as Taniela Tupou went to work in disrupting his Wallabies seniors.

But it wasn’t enough for the Queenslanders, Reds coach Brad Thorn declaring the match a “disappointing one to lose”.

As for the heat, SANZAAR officials will be pleased to see the early forecasts for Canberra and Newcastle – which host the Brumbies-Rebels and Waratahs-Blues games respectively – are at this stage predicting temperatures in the low 20s.

The conditions that greeted the Reds and Brumbies in Canberra were, as McKellar says, dangerous. Thankfully, a shift in the Super Rugby season/format in 2021 means a January 31 kick-off won’t be necessary once again.

The Sunwolves may be on borrowed time but if their Round 1 victory over the Rebels is anything to go by, the Japanese franchise appears intent on bowing out of Super Rugby with a bang.

And what exactly do they have to lose?

For a team that was adding players to its roster as late as a fortnight out from the competition, the Sunwolves looked a remarkably in-sync outfit against the Rebels. Their five-tries-to-four triumph ensuring the first – and for the time being last – Super Rugby match in Fukuoka was a resounding and entertaining success.

With no contract extensions on offer, or fear of longer-term uncertainty, the Sunwolves will be playing an almost pressure-less game each and every week. That is an enviable position to be in, so too the fact that they will be rated underdogs in likely every match they play.

It was however a worrying first-up loss for the Rebels. Coach Dave Wessels seemed to be feeling the heat ahead of the season kick-off and this 36-27 defeat won’t have eased the pressure.

Perhaps adding to the Rebels’ frustrations was that an Australian landed the vital early blow after the break. Just moments after the resumption, James Dargaville scooped up a chip kick and danced his way down the sideline to score the try that took the Sunwolves out to a 14-point lead.

When South African Garth April crossed close to the hour, the hosts were never going to be run down.

Their nine-point victory is unlikely to be their last of the season either. The Sunwolves will play with a freedom no other team will enjoy.

For a team so accustomed to scoring points as easily as anyone, the Hurricanes’ failure to put even a penalty on the board in Cape Town was perhaps the biggest shock of Round 1.

Even in the absence of the departed Beauden Barrett, the Hurricanes still possess enough attacking firepower to rival any side in the competition. Yet they turned in an embarrassing first-up effort under new coach Jason Holland.

The Hurricanes’ 27-0 loss to the Stormers was dominated by poor discipline, including two yellow cards and 12-7 penalty count against them, and a number of rudimentary errors. It was the first time the Hurricanes had failed to score a point since 1999.

It was however the ideal start for a Stormers side who are looking to ride the momentum of the Springboks’ World Cup triumph, specifically the efforts of skipper Siya Kolisi, Pieter-Steph du Toit, Steven Kitshoff and Herschel Jantjies.

And it was good news for all but Kolisi, the victorious World Cup-winning captain leaving the field with a knee injury after only 26 minutes.

That injury aside, the Stormers will have been thrilled with their first Super Rugby performance under new coach John Dobson. They now head off to Buenos Aires to face a Jaguares side who turned in a dominating Round 1 win of their own, a 38-8 over a disappointing Lions.