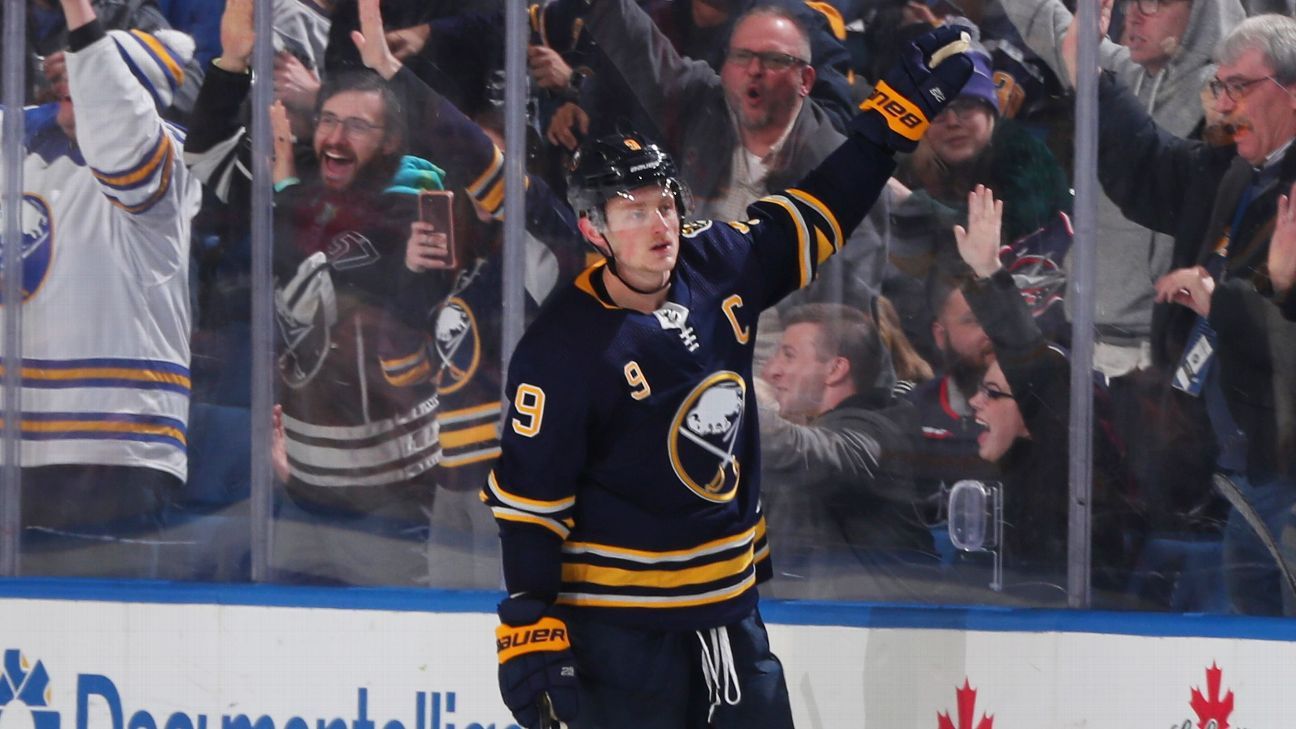 BUFFALO, N.Y. — Sabres captain Jack Eichel is doing everything within his power to prevent his team from falling into an all-too-familiar late-season rut.

The fifth-year player is enjoying a breakout season with a career-best 31 goals _ seven of them game-winners _ as he displays on-ice consistency. And then there are continuing signs that the 23-year-old is maturing into a well-rounded leader.

Eichel might still show an occasional outburst of frustration, such as when he smashed his stick over Buffalo’s net in the closing moments of a 3-1 loss to Montreal last week. What’s been more apparent is the self-restraint Eichel has displayed in not allowing his emotions to roll into the following day.

“The biggest thing I think is being able to regroup,” he said, before pausing to gather his thoughts a day after the loss to Montreal. “It’s not like last year.”

That’s still to be decided, though. Buffalo unraveled last year, by turning a 17-6-2 start into a 33-39-10 finish that led to coach Phil Housley‘s firing. And this year — Eichel’s numbers notwithstanding — they are 10 points out of playoff positioning in the Eastern Conference with 30 games left.

“We’ve been through these times where we take a couple of hits at this time of year … and then all of a sudden the wheels fall off,” he said. “That’s not happening here.”

The game following the loss to Montreal, Eichel backed up his words by scoring 36 seconds into overtime of a 2-1 victory over Columbus. But Buffalo needs more of those wins. At 23-22-7, the chances that the NHL’s longest active playoff drought pushes to a ninth year are high.

All that said, the victory over Columbus was significant in how it briefly silenced a disgruntled fan base voicing its displeasure over a team displaying modest hints of development under its fifth coach and third general manager in six years.

“Everyone knows what’s going on. We’re not stupid,” goaltender Carter Hutton said. “The outside, and the pressure that comes with the situation we’re in: So it was a big answer.”

The Sabres spent much of last week careening toward a state of crisis after coming out of a 10-day break with home losses to Ottawa and Montreal. The disgruntled masses gained a voice when 32-year-old fan Duane Steinel phoned into the Sabres’ flagship station, WGR-Radio, to deliver a three-plus-minute tirade on the franchise’s shortcomings. His criticisms ranged from questioning the Sabres’ inconsistencies to citing issues beyond the team’s control, such as an inability to print out-of-stock jerseys as part of the franchise’s silver anniversary celebrations.

The clip went viral on social media and was picked up by radio stations in Canada.

“I just want (the Sabres) to care. I just want them to matter again,” Steinel said, admitting his frustrations were prompted by Buffalo’s 5-2 loss to Ottawa. “It was depressing. I just looked around in the arena, even when the game was tied, there was nobody cheering. The atmosphere was so bad, and it’s been like this for so long, man.”

Two nights later, the Sabres were booed off the ice against Montreal.

First-year coach Ralph Krueger can feel the fans’ pain, even though he’s trying to block it out so as not to distract from his message to the team.

“It’s not that we’re sticking our heads in the sand, and whatever noise is out there is out there,” Krueger said. “But I really don’t let it into my head or my space because I need to work with this group on a daily basis as constructively as possible.

“Do fans deserve to boo us after games like Ottawa and Montreal? Yes. Do we need to take that? Yes. And it should fuel us to continue to work in the right direction.”

Buffalo’s season has been a series of peaks and valleys, with the Sabres following a 9-2-1 start with a 1-7-2 slump, before going 13-13-4 since. Krueger blames the inconsistencies on the team failing to stick to fundamentals.

“Sometimes it takes pain like we’re feeling right now to implement those (fundamentals) to become normal for us, and they aren’t yet,” he said.

Eichel has been the Sabres’ one consistent bright spot and is getting mentioned in the NHL MVP conversation despite Buffalo’s struggles. He’s fourth in the league in scoring and tied for seventh in points. Eichel has been held without a point 12 times this season, and just three times in his past 33 games, a stretch in which he’s combined for 23 goals and 23 assists.

ifficult as it might sound, Eichel insisted he can do more.

“Everyone needs to kind of look in the mirror and expect more out of themselves going forward,” he said. “That includes me.”

Though hopeful about the future, Eichel acknowledged the team’s inconsistencies have worn on him.

“Wouldn’t it wear on you,” Eichel asked. “Yeah, I think it wears on everyone. But that’s my job as a hockey player, as a leader, as a person, to be able to find a way to regroup every day, come to work and get better.”