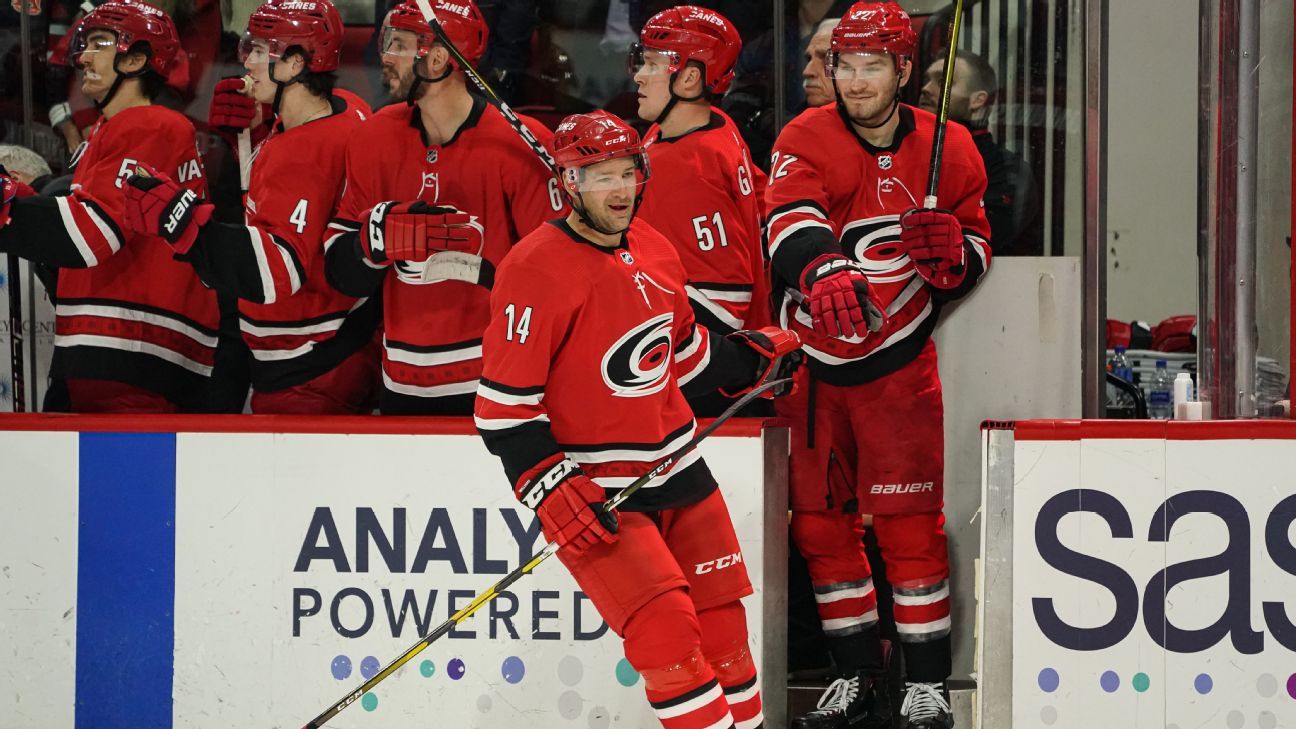 Every week, we’ll mine the waiver wire for lesser-owned assets to help your squad, whether you favor dynasty or the redraft format, and we’ll also toss in some tips for DFS players out there. Finally, we will look at some former go-to fantasy assets who may be overvalued – in the short- or long-term – for one reason or another.

Justin Williams, RW, Carolina Hurricanes (18.9%): So much for needing a few games to warm up. Scoring a pair of goals in only his second contest back after sitting out unsigned to start 2019-20, the veteran forward appears fully ready to contribute. While the fourth-line role is a bit of a bother, it isn’t set in cement. And there’s so much to appreciate about William’s spot on the club’s No. 1 power play. I’m not proposing drastic moves in clearing fantasy roster space for the 38-year-old – please don’t – but he has enough to offer managers juggling an injury or two.

Connor Brown, RW/LW, Ottawa Senators (17.8%): Riding hot into the All-Star break with a goal and assist in each of three games leading in, the former Maple Leaf will continue to serve as (former Toronto assistant) coach D.J. Smith’s top asset in most scenarios. Recognized for his on-ice smarts and responsible play, the 26-year-old is well on pace to smash his personal productive best with 21 assists and 10 goals to date. He also leads all Ottawa forwards in ice-time, averaging more than 20 minutes per game. While I’d like to see Brown on the Senators’ No. 1 power play – instead of the second unit – his regular top-six role at even-strength promises more scoring on the regular.

Nick Foligno, LW/RW, Columbus Blue Jackets (16.6%): Crediting teammates with allowing him time to work it out offensively, the Blue Jackets’ captain appears to have found some rhythm. Promoted to a scoring line with Pierre-Luc Dubois and Oliver Bjorkstrand, the 32-year-old scored two goals and two assists (plus-six) through five games ahead of All-Star recess. While the days of fantasy fireworks are long past, Foligno still has it in him to contribute in deeper leagues that reward scoring and physical play. As long as he remains on that top line.

Missed an episode of the ESPN On Ice podcast with Greg Wyshynski and Emily Kaplan? Find all the episodes from the show’s catalogue here. Listen »

Connor Garland, RW, Arizona Coyotes (15.3%): A second Connor worth considering, the Coyotes’ top-line/power play forward, competing aside Taylor Hall, is likely less appreciated because of where he competes. Fact is, the 23-year-old Sophomore has four goals (16 already on the season!) and seven assists in 12 recent games. Take full advantage of Garland’s lack of fantasy popularity as he continues to build on this breakout campaign.

Filip Zadina, RW/LW, Detroit Red Wings (7.8%): There’s real freedom in playing for club completely and utterly out of it. Sporting all of 28 points and losers of six-straight, the Red Wings sit dead-last in the league by several laps. Which is allowing the 20-year-old rookie the space to figure it out, free of pressure, in skating on a top scoring line with Dylan Larkin and Tyler Bertuzzi. Oh, and Zadina collected three goals and an assist in four games leading up to the break (before scoring more for the AHL Grand Rapids Griffins over the weekend). There being little point in rushing Anthony Mantha back from injury, the 2018 sixth-overall draft selection could wind up 2019-20 with a (relative) bang.

Kirby Dach, C, Chicago Blackhawks (3.6%): I think this kid is going to erupt in the second half. Potting a goal and two assists in his final two games ahead of the break, the 2019 third-overall draft pick has been boosted to the Blackhawks’ top power play. As long as he remains in that spot – and on a forward line with Alex DeBrincat – the 19-year-old could serve as a deeper-league fantasy gem between now and April. Just keep in mind, the Hawks don’t compete again until Feb. 1.

Jared Spurgeon, Minnesota Wild (56.3%): Recently replacing Matt Dumba on the Wild’s top power play, Spurgeon potted two goals and two assists in the four games preceding the break – three of those four points counting with the extra skater. If somehow available in your own league, exploit this productive flurry until it subsides – as long as Spurgeon remains on that top unit when Minnesota resumes play Feb. 1.

Catch 300+ NHL games streaming live or on replay this season on ESPN+. Click here for the upcoming schedule and to learn how to subscribe.

Jake Gardiner, Carolina Hurricanes (39.2%): Someone, or rather a few someones, must continue to fill the substantial blue-line void tore open by Dougie Hamilton’s unfortunate long-term injury. While Jaccob Slavin is shouldering a fair share of the extra load, so is Gardiner – particularly with the extra skater. The former Leafs defenseman has endured a lousy go of it with his new club to date, so let’s see if a few days off to reset, along with additional responsibility, inspires more from the gifted offensive-defenseman. I’m willing to predict it does.

Linus Ullmark, Buffalo Sabres (29.4%): Solid most of the season, the Sabres’ No. 1 has been flat-out impressive for most of January, winning five of seven starts and rocking a .932 SV%. Unlike many other tandem-team members around the league, with Carter Hutton floundering, Ullmark is playing plenty. Plus, the banged-up Sabres will benefit from getting Jeff Skinner back Tuesday and Victor Olofsson in not too, too long. If needing goaltending help, check on Ullmark’s fantasy availability asap.

Igor Shesterkin, New York Rangers (9.0%): So let’s suppose the Rangers – idle this week until Friday – trade Alexandar Georgiev in the next little while. That leaves Henrik Lundqvist and Shesterkin to backstop the (probably) non-playoff-bound Rangers through the waning stages of 2019-20. Why not invest in the future in net as a fantasy wild card in the meanwhile? Lundqvist wasn’t good in his only two appearances all this month.

Antti Raanta, G, Arizona Coyotes (54.1%): From team accounts, Darcy Kuemper isn’t long for returning from the lower-body injury sidelining him since late-ish December. Which is good news for Arizona, considering Raanta’s ugly January, allowing AHL call-up Adin Hill the opportunity to play more than anticipated. Once Kuemper feels fit, we might not see much of the Coyotes’ backup for a while.