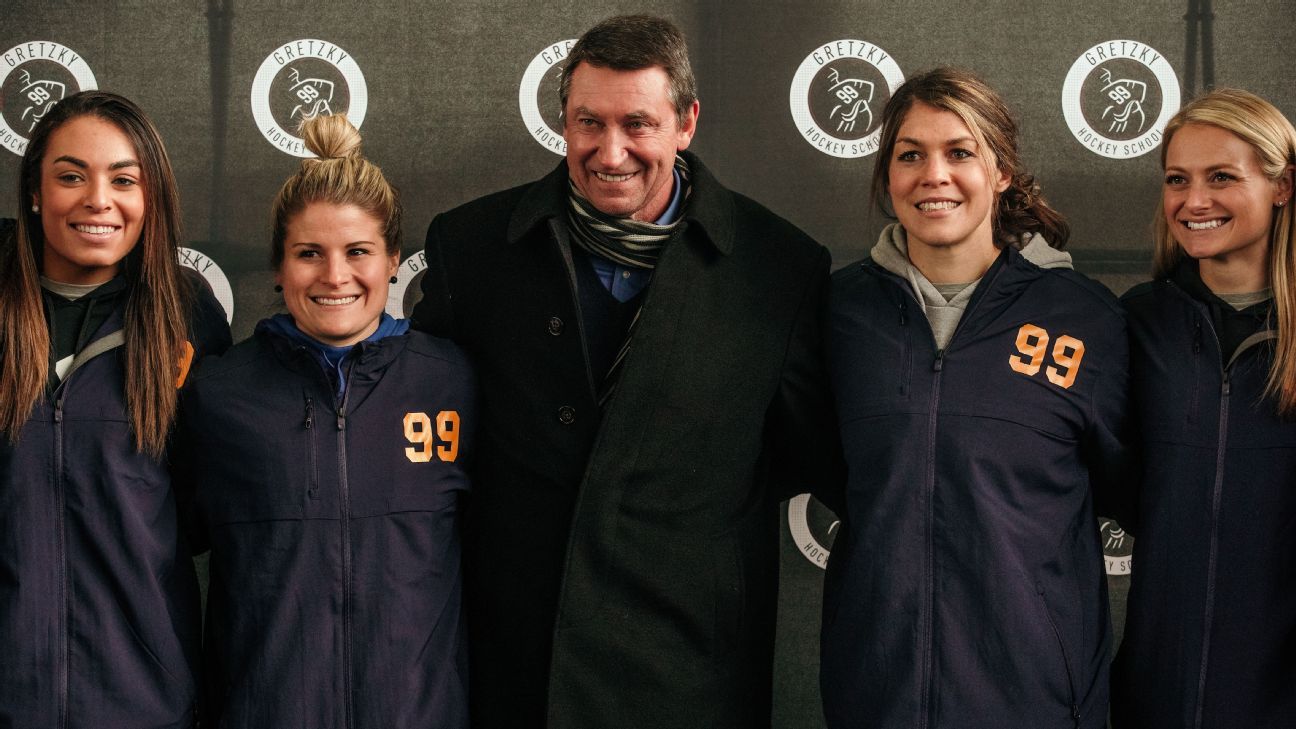 ST. LOUIS — Wayne Gretzky called women’s hockey players involvement in the NHL All Star game “a big step forward” in growing the sport — and he hopes the league will continue to stay committed to the women’s game.

“Exposure is everything,” Gretzky told ESPN on Friday, ahead of the inaugural 3-on-3 women’s exhibition at NHL All Star weekend in St. Louis. “It’s baby steps. You’re not going to flood the market overnight. It takes time to get into the markets and get more youth girls to participate in hockey. It’s very important that there’s an understanding from the National Hockey League that we want to help grow women’s hockey and make girls hockey bigger and better than it’s ever been. So I think the commissioner and the NHL have done a tremendous thing by bringing these women out.”

Gretzky, who still has a home in St. Louis, put on his first-ever all-girls hockey camp on Friday, in conjunction with Adidas as a part of their She Breaks Barriers campaigns — which Gretzky reinforced is about providing access, breaking down stereotypes and increasing visibility for women’s sports. American national team player Brianna Decker and Canadian national team players Renata Fast, Rebecca Johnston and Sarah Nurse — four of the 20 women’s players invited to play in the 20-minute 3-on-3 game pitting the U.S. versus Canada — met with Gretzky before the event, then got on the ice and demonstrated drills for 50 St. Louis-area girls hockey players, ages 12-16.

The NHL has invited women’s hockey players to participate in its All-Star weekend in each of the past three years, but has upped the involvement each time. Last year in San Jose Kendall Coyne Schofield became the first woman to compete in the NHL All-Star skills competition; Coyne Schofield’s 14.346-second lap time placed seventh out of eight in the fastest skater event, and was less than a second behind the winner, Edmonton Oilers center Connor McDavid.

Fast said that by the NHL expanding involvement this year to create an event specifically for women means the 2020 All Star game “is one of the biggest events we’ve ever had for women’s hockey in a long, long time. For as long as I can remember.”

“I think it’s super promising for the future of the sport,” Fast said. “We all know the NHL has the resources and the infrastructure that could help push us forward. So to see the steps they’ve taken, they obviously want to be part of women’s hockey. They wouldn’t have created an event like this if they didn’t really want to come into that marketplace.”

More than 100 women’s hockey players –including most American and Canadian Olympians — formed the Professional Women’s Hockey Players Association, and are boycotting professional women’s hockey league this season, while waiting for a more sustainable pro league. There have been suggestions that the NHL should help form that league.

“The commissioner was always a little apprehensive to get more involved because there were two different leagues [in North America] and he didn’t want to show favoritism to one over the other,” Gretzky said. “But I think this is a big step forward for the NHL to reach out to these women and say: we want you to be part of the National Hockey League at one of its biggest events. And I could see the NHL getting more and more involved in women’s hockey. To what extent, the decision will have to be made by the commissioner.”

In the meantime, companies like Adidas have stepped up. Immediately after last year’s All Star game, Adidas signed four of the athletes who competed in the event — and later added Nurse — to endorsement deals and featured them in marketing campaigns. They’ve also provided all uniforms and gear for the PWHPA and continue to put on grass-roots events like the Gretzky clinic on Friday.

“We have all of these watershed moments happening,” said Nicole Vollebregt, SVP Global Purpose for Adidas. “Every month I feel like there’s something new that’s a watershed moment. That shows that we’re making progress and we’re getting further. Last year’s All Stars was one of those big moments; it woke people up a bit to what’s possible.”

Gretzky was confident that fans would embrace the women’s event.