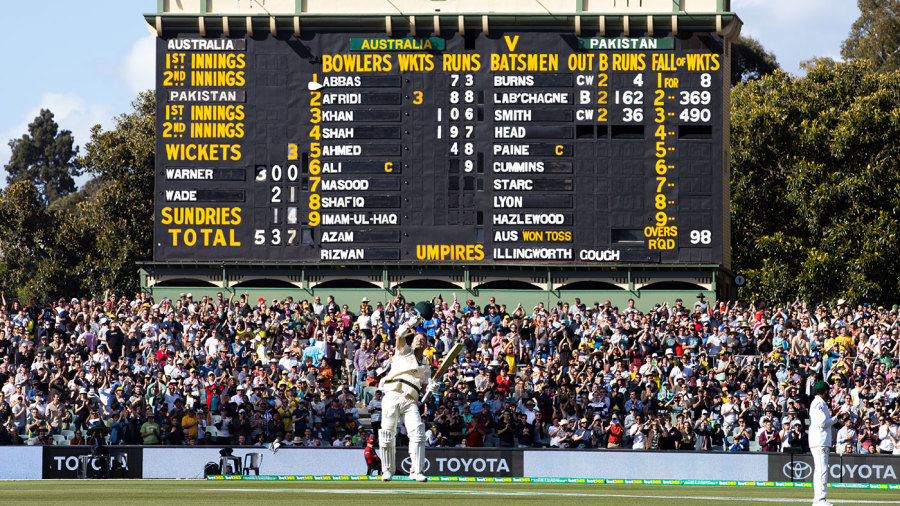 If the opening day was wretched for Pakistan, the adjectives to describe the second are best left unprinted. There was no humiliation spared, no skillset left unexposed as Australia’s batsmen – led by David Warner‘s epic unbeaten 335 – did what they liked to Pakistan for the first half of the day, with the bowlers cutting in on the action in the final session.

Warner will grab tomorrow’s headlines, and cement a place in Australian cricketing folklore for his inniungs today, becoming the first triple centurion in the Adelaide Oval’s history, and surpassing Donald Bradman’s 334 which Mark Taylor equaled in 1998. That was when Tim Paine finally took mercy on the hapless visitors, calling his side in just as the cricketing world was settling in to see a serious challenge to Brian Lara’s record 400 not out.

If that tempted you to decry the pitch a mundane road, the final session would have had you reaching for the emergency brake. Mitchell Starc was one wicket away from a five-fer, while Josh Hazlewood and Pat Cummins swarmed all over Pakistan early. Regular breakthroughs meant there was never any chance of a partnership building that so much as hinted Pakistan might challenge Australia’s 589 enough to force them in to bat again at some point this Test. When it was time to wind up, Pakistan were 493 runs behind, with the tail already exposed. Babar Azam, predictably, was the lone source of resistance from the other end, but when the umpires called stumps, they might as well have been calling a halt to a boxing match.

Pakistan were still seven overs away from the new ball becoming available when the day began, but the signs were ominous in that early half hour. Instead of being able to rein Australia in during that initial spell, Yasir Shah and Iftikhar Ahmed operated ineffectually, with Australia piling on 65 in nine overs of the old ball, scoring more freely than they had across the entirety of the first day. Any pressure they might have felt at the start was already well off when the new pink ball was called for, and the records were quickly stacking up.

The 361-run partnership between Warner and Marnus Labuschagne was the second-highest second-wicket stand for Australia in Test cricket, with the pair joining an elite group to have scored 150 in consecutive innings. By the time Shaheen Afridi – again Pakistan’s best bowler – castled Labuschagne’s offstump with a genuinely delightful inswinger, he had amassed 162. Australia were 2 for 369, with Steven Smith walking in. Hardly a sight for sore bowling shoulders.

Warner would continue to bring up milestones. He reached 200 and celebrated with the steel of a man only halfway through his journey. Moments later, it seemed, he was raising his bat for 250, which is when he really cut loose as Australia looked to wring every last run out of their innings. Pakistan didn’t help themselves when debutant Muhammad Musa had Warner nick off to fourth slip from a no-ball, the second time a Pakistan debutant reprieved Warner in this way this series after Naseem Shah’s overstep in Brisbane.

Pakistan’s bowling might have been consistently listless, but the extent of Yasir’s nightmare may yet have career-affecting consequences for him. His struggles in the southern hemisphere are well-documented, particularly his record in Australia. But here it almost seemed safer to have Iftikhar bowling instead. He was, after all, “only” going at five per over, while Yasir conceded 197 in his 32 at more than a run-a-ball, unable to keep himself from dragging the ball down several times every over, or feeding them faithfully into the left-handers’ hitting arcs. If, in these past three years, Yasir worked on how to manage a game where wickets come at a premium, it did not show today.

After Smith edged a wild hack, Warner and Matthew Wade combined for a breezy 99-run partnership which saw Warner bring up 300 with a pull off Mohammad Abbas – who still wasn’t targeting the stumps – and brought out a celebration so emotive it moved his wife, sitting in the stands, to tears. After that, he was even more unconfined, and when he took Abbas for 17 in an over, it really appeared that 400 was going to be given a shot. But when a single to extra cover took him past 334 – to stand second beyond Matthew Hayden’s 380 for Australia – Paine emerged from the dressing room and called them in, a cue for Adelaide to stand as one as its most prolific scorer walked off.

It is perhaps no coincidence that was the precise moment when the wicket decided to change character as the lights took hold. Shan Masood was given out in the first over, and though he had it overturned, the breakthrough was never far away. Imam-ul Haq nicked off to Warner – who else? – in the slips in the fifth over, and it wasn’t long before Cummins found Azhar Ali’s outside edge after the dinner break, allowing Smith to take a sharp catch diving forward at second slip.

It was, more or less, the way every Pakistan batsman was dismissed. Each one of the six that fell would have their outside edge tickled, with Starc doing much of the damage in the final half an hour. Asad Shafiq fell to one he could do little about, while poor shot selection from Iftikhar and Mohammad Rizwan meant Pakistan were making Australia’s task much easier than it needed to be. Sunday might be affected by rain, but it appears little can impact the outcome of this match.