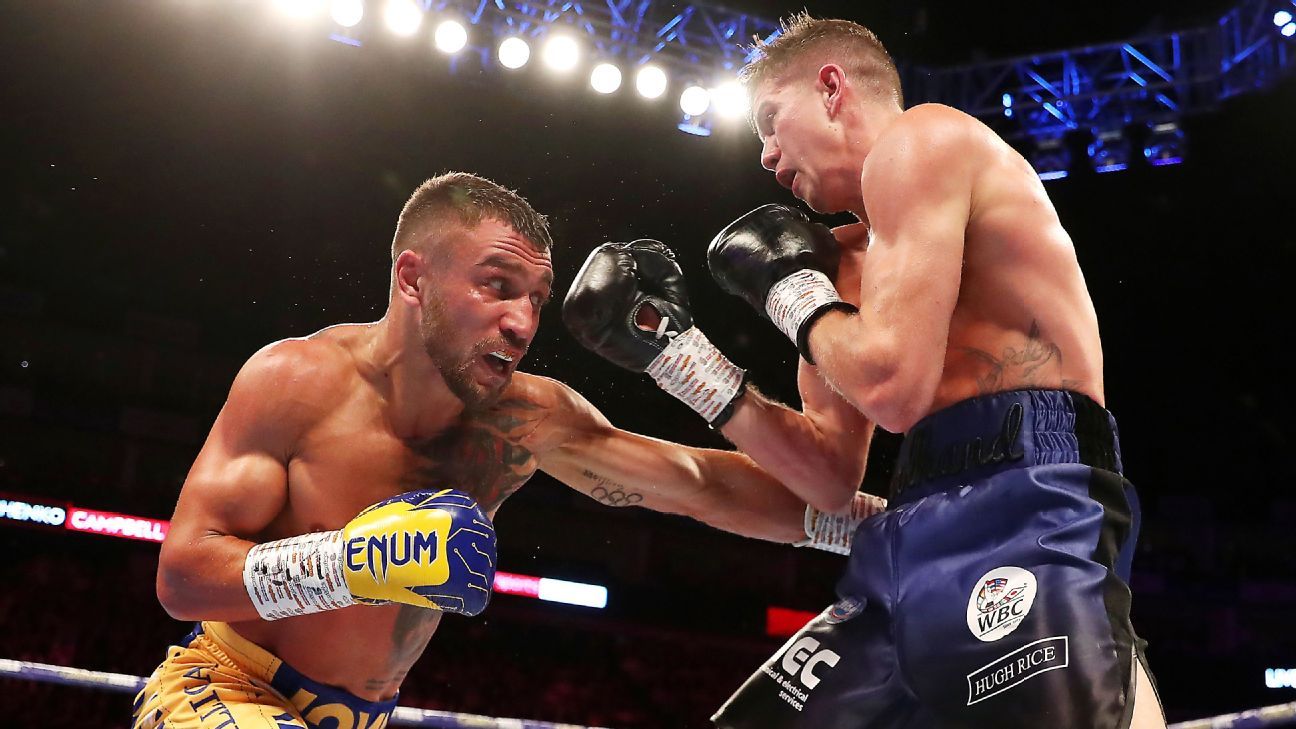 Pound-for-pound king Vasiliy Lomachenko moved a step closer to becoming the undisputed lightweight world champion with an action-packed unanimous decision victory against Luke Campbell on Saturday at the O2 Arena in London.

Lomachenko defended his two 135-pound belts and added a vacant one to his collection as he won a lopsided, but hard-fought battle with England’s Campbell on ESPN+ in a fight between Olympic gold-medal winners before a wild sold-out crowd of 18,000-plus.

“Loma is up there with Muhammad Ali, Marvin Hagler, Sugar Ray Leonard, Floyd Mayweather, Oscar De La Hoya, Manny Pacquiao. He belongs with those fighters,” Top Rank promoter Bob Arum, who promoted each of those legends, said of the two-time Olympic gold medalist many consider the greatest amateur of all time and now the class of professional boxing.

Lomachenko now needs only the fourth belt to become the undisputed champion and is expected to get the opportunity in his next fight in the first part of 2020 against the winner of a fight between world titlist Richard Commey and mandatory challenger Teofimo Lopez Jr., who probably will meet on Dec. 14 in New York on ESPN.

First, Lomachenko, 31, of Ukraine, who has also won world titles at featherweight and junior lightweight, had to deal with Campbell, a fellow southpaw with a height and a reach advantage. But Lomachenko dismissed Campbell, the second Brit in a row he has defeated after destroying Anthony Crolla, a former world titleholder, by easy fourth-round knockout in April in Los Angeles.

Campbell, who was taken to the hospital after the fight for precautionary reasons, was classy despite the disappointment of losing his second opportunity to win a world title.

“He just beat me, so he’s very good,” Campbell said. “He’s a special fighter, and we all knew he was a special fighter. This is boxing, and we train to win. Obviously, I’m disappointed in myself for not getting the victory. Tonight was Lomachenko’s night, and my time will come.”

“It’s hard to prepare for him. Luke did himself proud tonight. He boxed a once-in-a-lifetime fighter,” McGuigan said.

The fight began at a measured pace with Lomachenko and Campbell trying to see what the other had. Campbell landed a nice left hand to the head in the closing seconds of the first round, but he would struggle to win rounds thereafter.

Lomachenko began to establish his jab in the second round and also nailed Campbell with a left hand in the final seconds. In the third round, Lomachenko, poised as ever, began to pick up the pace and unleashed a hard straight left hand that caught Campbell cleanly and snapped his head back. Lomachenko fired off several jabs that also landed.

Lomachenko continued to land his jab, jumping in with it and snapping back Campbell’s head in the fourth round as well as landing body punches, although Campbell stood his ground and fired back.

Lomachenko (14-1, 10 KOs), making his third title defense, had a strong fifth round. He was stalking forward and eventually nailed Campbell with a clean straight left hand late in the round. Campbell was clearly hurt, and Lomachenko followed up with several powerful body shots that had Campbell in trouble as the bell sounded.

The seventh round featured wild action with Campbell hurting Lomachenko with a left hand, but his success was brief. Lomachenko came back strong to rock Campbell with a right hand and then sunk in a series of hard body shots.

Campbell (20-3, 16 KOs), 31, of England, was game and continued to give a huge effort, but it was Lomachenko landing the cleaner, harder shots in the ninth round. They continued to go hard after each other in the final rounds with each man having his moments before Lomachenko authoritatively took over in the 11th round.

He pounded Campbell and dropped him to a knee with a brutal right hand to the body followed by a right to the head. Campbell got to his feet but was shaky. Lomachenko was all over him during the follow-up attack, lashing him with punches as Campbell went into survival mode. Overall, Lomachenko outlanded Campbell 44-17 in the 11th round.

Referee Victor Loughlin warned Lomachenko for a low blow in the 12th round but after the warning, Lomachenko again pounded Campbell with so many clean shots that he grabbed on hard to Lomachenko around the waist to keep from going down and wrestled Lomachenko to the mat in another huge Lomachenko round.

Although Campbell had been competitive round to round over the first half of the bout, Lomachenko took over in the second half of the fight.

Campbell was getting his second shot at a lightweight world title. He challenged Jorge Linares for his belt in September 2017 in Inglewood, California, but was knocked down and lost a split decision in an overall competitive fight. Linares would go on to lose the title by 10th-round knockout to Lomachenko two fights later in May 2018.

Campbell won three fights in a row after losing to Linares to earn a mandatory shot at Mikey Garcia, but when Garcia vacated, Lomachenko was given the opportunity to face him for the vacant WBC title in addition to putting his WBO and WBA belts on the line.

Now Lomachenko has three of the four major belts and will aim to become the fifth man to win all of them in the four-belt era. He hopes to join cruiserweight and close friend Oleksandr Usyk (2018), who was ringside; junior welterweight Terence Crawford (2017); and middleweights Jermain Taylor (2005) and Bernard Hopkins (2004).

Arum, the promoter of Commey-Lopez, plans to match the winner with Lomachenko.

“Obviously, we’re looking to win the fourth belt to unify the title,” Arum said. “But Loma and [manager] Egis [Klimas] have told [us] they can’t wait to come back to the U.K. to fight here again. The English fight fans are the best fans in the world.

“Luke Campbell didn’t disgrace himself. He fought a hell of fight. He’s a hell of a fighter. Big, big heart, and Luke will be back. [Lomachenko] will fight the best fighters at featherweight, [junior lightweight] or lightweight. Only the best. He’s a special, special fighter.”