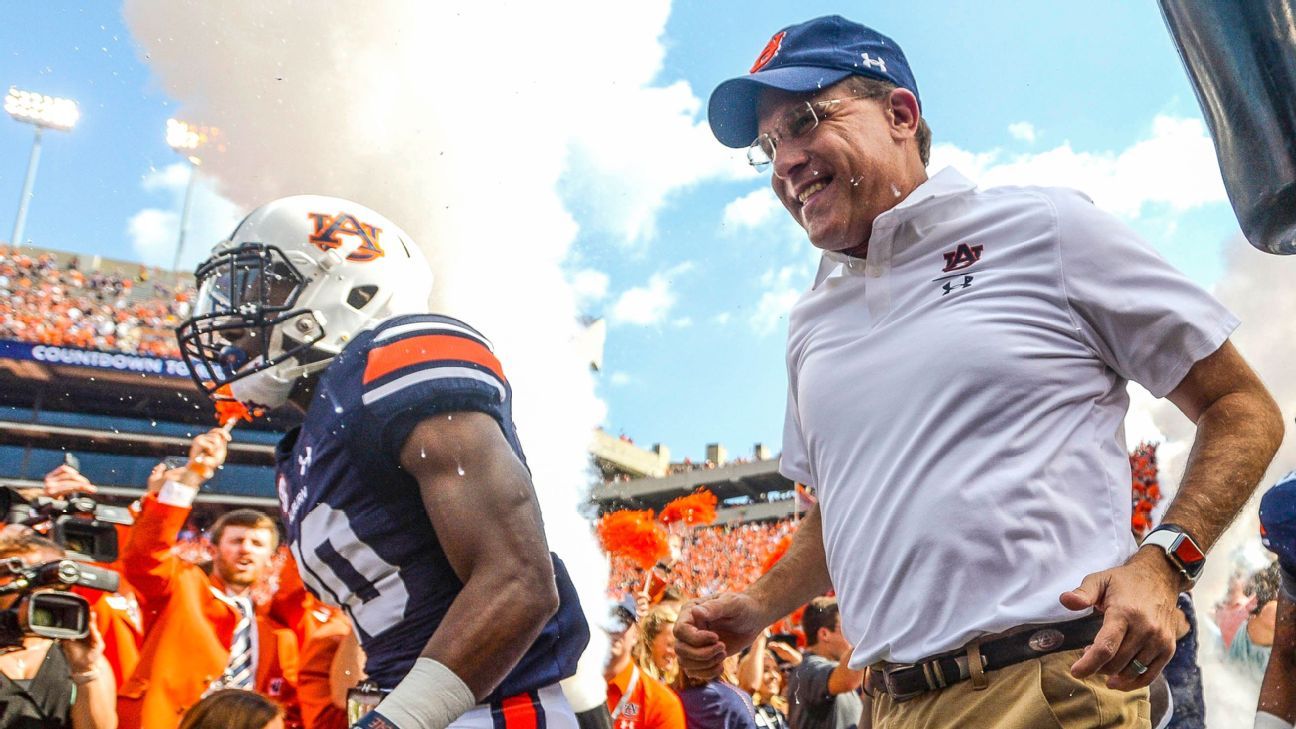 College football season is in full swing Saturday. Here is how to watch Week 1’s biggest games, including tonight’s Oregon-Auburn showdown, along with viewing information and notes for each Top 25 game. We’ll highlight the best of our experts’ picks, betting tips and important stuff like … a bacon vending machine at Ohio State.

Here’s everything you need to get ready for a full day of action:

Kentucky paid tribute to one of the most popular players in school history, quarterback Jared Lorenzen, who died in July.

We know you’re skipping this to read the tweet anyway, but I just wanted to type the words “Ohio Pork Council” and “bacon vending machine.”

The Ohio Pork Council invites Buckeye fans to visit the Bacon Vending Machine, located near section 37A in the south stands, at tomorrow’s game against Florida Atlantic and each home game for the remainder of the season. @OhioPork#Baconhttps://t.co/6iVvUiJ58P pic.twitter.com/yFuG710EMc

Solid first game for Nevada kicker Brandon Talton on Friday night. The freshman nailed a 56-yarder with no time left — the longest game-winning FG by a freshman kicker as time expired over the last 15 seasons — to lead the Wolf Pack to a 34-31 victory over Purdue.

Sideline accoutrements are all the rage, of course. Let’s check in on some Week 1 celebrations.

Morehead State has a “Turnover Cane”

Oh how we missed you, college football. pic.twitter.com/nXPPS02LWh

Louisiana QB Levi Lewis connects with Nick Ralston for an 11-yard touchdown pass and Lewis celebrates with a cane.

When Rutgers was No. 1

Rutgers, which hosted the first college football game (against Princeton, on Nov. 6, 1869) is wearing long-sleeve uniforms as a throwback.

The latest: Injury updates and news

Players from Auburn and Oregon hype up their Week 1 matchup at AT&T Stadium.

Check back here throughout the day for the latest results and quick takes from Week 1 in order by kickoff time; all times ET; lines courtesy of Caesars Sportsbook):

Florida Atlantic at No. 5 Ohio State
Time: Noon
How to watch: Fox
Line: Ohio State -27.5
And our best line: Florida Atlantic has never beaten an AP-ranked opponent, going 0-20 and losing by an average of 34 points per game.

Northern Iowa at No. 21 Iowa State
Time: Noon
How to watch: Fox Sports 1
Line: No line
And our best line: Brock Purdy took over as starting quarterback last Oct. 13, and the Cyclones went 6-2 the remainder of the season.

Eastern Washington at No. 13 Washington
Time: 3 p.m.
How to watch: Pac-12 Network
Line: No line
And our best line: Georgia transfer Jacob Eason (13 career starts, 16 TDs/8 INTs) takes over at quarterback for Washington after the graduation of Jake Browning.

Duke vs. No. 2 Alabama (in Atlanta)
Time: 3:30 p.m.
How to watch: ABC and ESPN App
Line: Alabama -33.5
And our best line: The Crimson Tide look to extend their FBS-record 82-game winning streak against unranked opponents.

No. 22 Syracuse at Liberty
Time: 6 p.m.
How to watch: ESPN+ and ESPN App
Line: Syracuse -18
And our best line: Syracuse is ranked in the preseason Top 25 for the first time since 1998. New Liberty head coach Hugh Freeze has been hospitalized during fall camp due to a staph infection and might miss the game or could coach from the box rather than on the field.

Georgia Southern at No. 6 LSU
Time: 7:30 p.m.
How to watch: SEC Network and ESPN App
Line: LSU -27.5
And our best line: LSU, which finished 10-3 last season, is the only SEC team returning at least eight starters on both offense and defense.

Middle Tennessee at No. 7 Michigan
Time: 7:30 p.m.
How to watch: Big Ten Network
Line: Michigan -34.5
And our best line: First chance to see how Michigan’s offense will look under new coordinator Josh Gattis.

No. 11 Oregon vs. No. 16 Auburn (in Arlington, Texas)
Time: 7:30 p.m.
How to watch: ABC and ESPN App
Line: Auburn -4
And our best line: Auburn, which struggled on offense last season, is starting Bo Nix, the first true freshman to start at quarterback for the Tigers since 1946. Oregon returns 10 offensive starters, including QB Justin Herbert, the potential No. 1 overall NFL draft pick next year.

Louisiana Tech at No. 10 Texas
Time: 8 p.m.
How to watch: Longhorn Network and ESPN App
Line: Texas -19.5
And our best line: Texas comes in with its highest preseason ranking since opening No. 5 in 2010, but has to replace six starters on offense and eight on defense.

Sunday: Houston at No. 4 Oklahoma
Time: 7:30 p.m.
How to watch: ABC and ESPN App
Line: Oklahoma -23
And our best line: Jalen Hurts arrives from Alabama to take the reins of Lincoln Riley’s prolific OU offense. Houston’s D’Eriq King was responsible for 50 touchdowns last season, behind only Oklahoma’s Kyler Murray and Ohio State’s Dwayne Haskins (54 each).

No. 1 Clemson 52, Georgia Tech 14 (Thursday)
It would be easy enough to criticize Trevor Lawrence‘s opening performance (2 INTs in 23 attempts) but the Tigers aren’t worried about their QB long-term. More encouraging was the performance of the defensive line, which was a legitimate question mark entering the opener and looked good, coming away with two sacks while showcasing some depth that’ll be needed next week against Kellen Mond and Texas A&M. — David M. Hale

No. 8 Florida 24, Miami 20 (Aug. 24)
The Gators put together one of the sloppier performances to open the season and were fortunate to beat Miami. But the real question is whether that was a product of Week 0 or the way we can expect Florida to play once it faces its next FBS opponent. Florida needs to get more consistency from veteran quarterback Feleipe Franks, improve its run game and cut down on the turnovers. Defensively, tackling needs to get better, and so does safety play. — Andrea Adelson

No. 12 Texas A&M 41, Texas State 7 (Thursday)
A four-interception performance was a promising start for an Aggie secondary that was a frequent target of criticism all offseason. But the Week 2 test — vs. Trevor Lawrence and Clemson — will be much stiffer than Texas State. Kellen Mond looks even better than he was a year ago, and that’s huge. The biggest offensive question out of Week 1? Consistency and communication on the offensive line. That must improve when the Aggies face the nation’s elite. — Sam Khan Jr.

No. 14 Utah 30, BYU 12 (Thursday)
It’s time to start looking forward to Utah’s trip to USC on Sept. 20. The Utes validated preseason hype, for now, in their 30-12 win against rival BYU and have what should be two easy home games (Northern Illinois and Idaho State) before heading to a place where they’re winless in eight tries dating back to 1925. RB Zack Moss has a real shot to lead the nation in rushing. — Kyle Bonagura

No. 17 UCF 62, Florida A&M 0 (Thursday)
The spotlight was on UCF’s quarterbacks going into the opener against FAMU, and they did what was expected against an overmatched opponent. Brandon Wimbush and Dillon Gabriel combined for five touchdown passes, and it would not be a surprise if they continue to split snaps. Of far greater importance was the Knights losing starting cornerback Brandon Moore to a serious leg injury. Moore was hurt in the third quarter, with the game well in hand, and now the Knights must replace one of their most veteran defensive players. — Adelson

No. 18 Michigan State 28, Tulsa 7 (Friday)
The Spartans’ defense didn’t skip a beat from last season, wreaking havoc against Tulsa’s offense, holding them to minus-73 team rushing yards, fewest in school history and the second-fewest by a team in the past 20 seasons. Quarterback Brian Lewerke showed the promise he displayed in his sophomore season and could make the Spartans a sleeper team to watch. — Tom VanHaaren

No. 19 Wisconsin 49, South Florida 0 (Friday)
The Badgers had an unusual season in 2018 with injuries and bad luck. But with Jonathan Taylor, who averaged 10.2 yards per touch, the offense will be just fine with new starting quarterback Jack Coan. The involvement of Taylor in the passing game — a career-high 48 receiving yards with two TD receptions — could be a good wrinkle for the offense and helps Coan in his adjustment going forward. — VanHaaren

No. 24 Nebraska 35, South Alabama 21
This wasn’t the “We’re back!” announcement Nebraska fans were hoping for. The Huskers scored three non-offensive touchdowns in the second half but needed all three to hold off a game USA squad. The defense was mostly fine, but more was expected of this offense than two touchdowns and 4.2 yards per play against what was one of the worst defenses in FBS last year. Lots of fine-tuning to do before next week’s trip to Colorado. — Bill Connelly