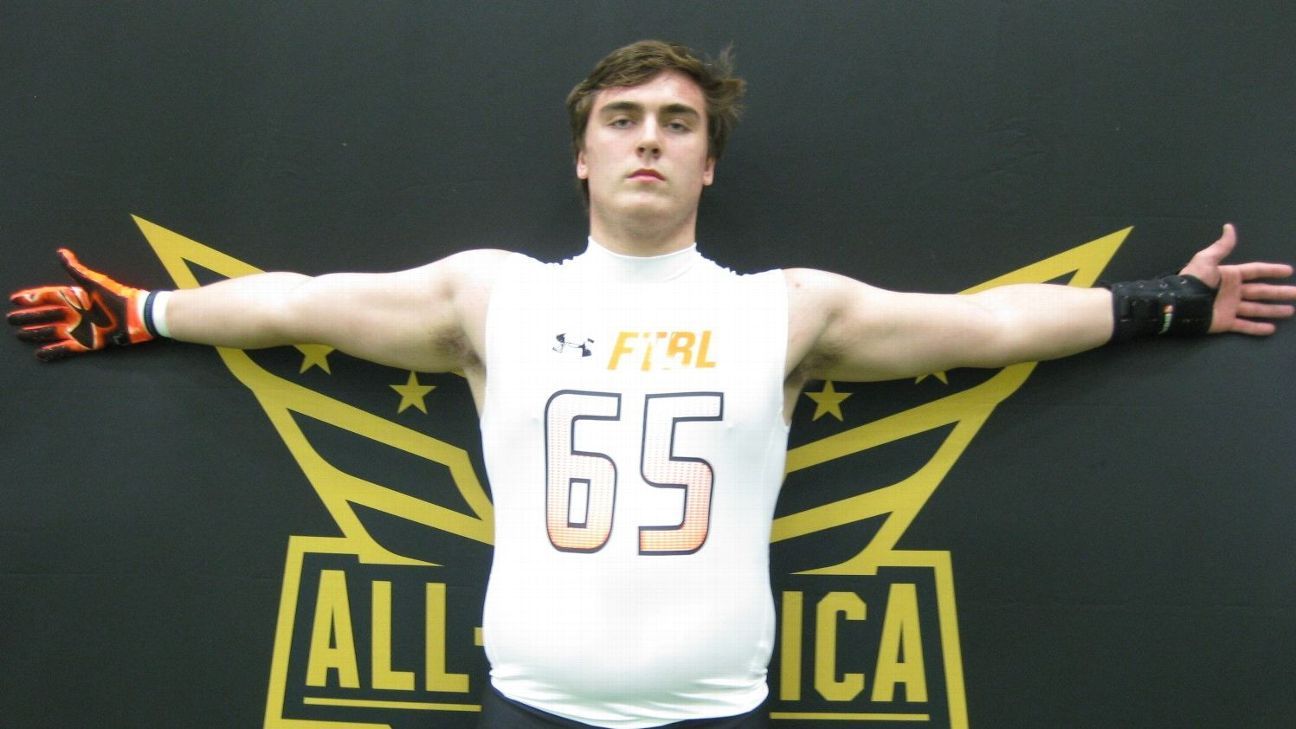 The ESPN Junior 300 rankings have been released for the 2021 class, and there is plenty to digest with the new list.

This is a first look at the underclassmen rankings, which schools have gotten off to fast starts and what trends are developing within the list. To get you caught up on who made the list and which recruit is the top overall prospect, here is everything you need to know about the 2021 ESPN Junior 300.

Since the full ESPN 300 started in 2013, Trey Smith is the only offensive tackle to hold on to the No. 1 overall ranking. A spot largely dominated by defensive lineman, Smith proved to be a special talent — and now Tommy Brockermeyer has a similar opportunity.

Brockermeyer debuts as the No. 1 prospect in the ESPN Junior 300, and though this is a preliminary list of underclassmen, he has a chance to hang on to that top spot once the full ESPN 300 is released after the class of 2021 finishes its junior season.

The 6-foot-6, 280-pound tackle from All Saints Episcopal School in Fort Worth, Texas, has a strong connection to the Texas Longhorns. His father, Blake, and his grandfather, Kae, both played football at Texas. Blake started in the ’90s and was a first-round draft pick by the Carolina Panthers. Kae played in the late ’50s and early ’60s.

Tommy’s older brother Jack was recruited to play in college but decided not to pursue an athletic career and currently holds a 3.92 GPA at Rice, where he is studying economics and managerial studies. Then there’s Luke, another older brother who currently plays linebacker at Texas.

On top of that, Tommy has a twin brother, James, who is an ESPN Junior 300 offensive lineman. Ranked No. 229 overall, James is a 6-foot-3, 255-pound center. And if that weren’t enough, both their mother and grandmother went to Texas.

“I think they’ve narrowed it down pretty good to a handful of schools that are in their wheelhouse, and Texas is going to be in the picture,” Blake said.

“It’s actually hurt [Tommy and James] in recruiting because a lot of schools don’t recruit them or won’t recruit them because of the Texas ties because they just assume they’re going there. It’s definitely not a done deal. It’s obviously going to be one of the leaders, but there’s also Alabama, Clemson, Stanford, Michigan. There are some good schools out there.”

Blake is currently a defensive analyst at SMU, where he has been for almost two years. SMU was the first program to offer the twins, and the family has talked about Tommy and James playing for their father, but it isn’t something he is pushing. Blake wants to ensure that Tommy and James see the right programs and make the right decisions for them, Texas or not. Having been on both sides, as a player and now as a coach, he understands the pitfalls and potential hazards of making a blind decision.

“I’m showing them pretty much every top program in the country, whether they might think, they’re like, ‘Why are we going to Iowa, Dad?'” Blake said. “I’m like, ‘These guys know what they’re doing,’ and then after they go and see it, they say, ‘Yeah, I get it.’ I’m going to give them the best advice I can give them because I know the whole process, and I’ve seen it all and done it all.

“You can’t ever guarantee things are going to happen the way you want and coaches are going to be there, so there’s a lot of different aspects you have to look at.”