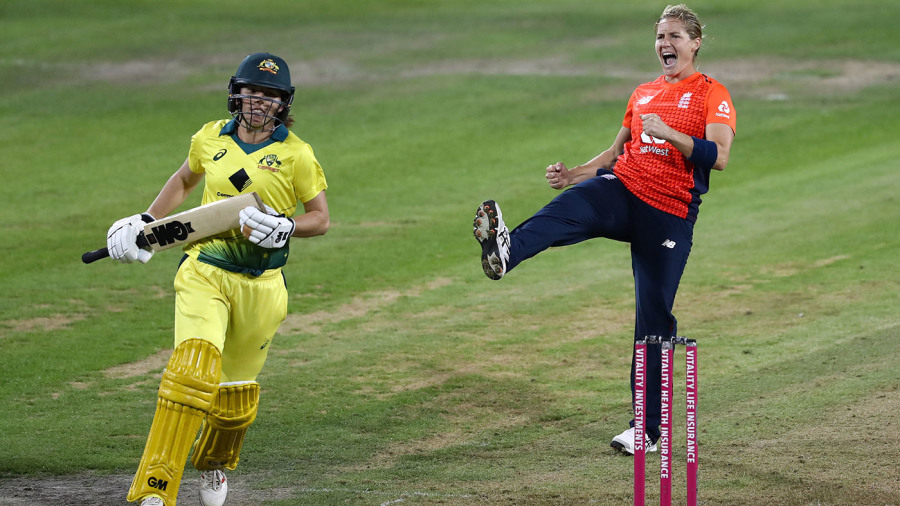 England have denied Australia a limited-overs whitewash with a consolation 17-run victory in the third T20I, the final encounter of their Ashes series, having finally struck on a successful combination of youth and experience.

Australia’s dominance of the series – they had retained the Ashes after the drawn Test and won them outright with victory in the first T20I – meant the most England could hope for from the match was to restore some pride and unearth hope for the future.

They achieved both, first as seasoned pair Katherine Brunt and Lauren Winfield combined for an unbroken 55-run stand off 39 balls for the sixth wicket, then as Brunt contributed with the ball alongside 20-year-old spin duo Sophie Ecclestone and Mady Villiers, the latter claiming two wickets on her international debut.

Set 140 for victory, Australia struggled to establish a partnership, with opener Alyssa Healy’s 28 one of only two scores in double figures for the tourists. The other was, predictably, Ellyse Perry, whose unbeaten 60 off 50 balls emphasised her position as Player of the Series.

Perry’s 378 runs at an average of 94.50 and 15 wickets at 12.85 made her the top run-scorer and leading wicket-taker for the Women’s Ashes, during which she also became the first player – man or woman – to reach 1000 runs and 100 wickets in T20 Internationals. But, lacking support from her team-mates during the run-chase, the task proved too great in Bristol, even for her, as Brunt and Ecclestone snared three wickets each and Essex allrounder Villers took 2 for 20 from her four overs.

Going into the match, Australia were not content to settle for a 12-points-to-four series scoreline, looking to ram home their advantage and leave England with just two points from the Test draw. But the hosts left them with no option, taking control of the game.

That was despite the hosts losing a steady stream of wickets through much of their innings.

Interestingly, Amy Jones – who has fallen to Perry four times in the 25 balls she has faced from the star Australian allrounder – dropped down the order from opener to No.5 and avoided her nemesis altogether. Perry only bowled two overs at the start of the England innings, which went for 16 runs.

Danni Wyatt, opening in Jones’ place made a neat 20 off 19 balls but failed to go on with it when she was bowled by Megan Schutt. Similarly, Heather Knight made a start, but fell on 23 when she was run out by an excellent throw from Perry to wicketkeeper Healy. Jones reached 19 off as many balls before she was caught behind off the bowling of Ashleigh Gardner.

That brought Brunt to the crease and she and Winfield set about posting a competitive total, with Brunt reaching 25 off 18 balls and Winfield 26 off 22.

Brunt struck early in the Australian innings to remove Beth Mooney, but when Ecclestone removed the danger of Meg Lanning, who had scored a record 133 not out in the first T20 of the series, lbw for just two, the match looked to be on an even keel. Villiers tipped it in England’s favour when, after dropping a return catch off Healy in her first over, she had the opener caught by Ecclestone off a full toss in her second and then had Ashleigh Gardner stumped to put Australia at 45 for 4.

Brunt and Ecclestone did the rest, with Ecclestone claiming two wickets with the last two balls of her four overs to remove Jess Jonassen and Delissa Kimmince.

Player of the Match Brunt said that at times through the series England mentally “just weren’t there”.

“I was surprised with the amount of people that turned up tonight,” Brunt told Sky Sports. “Through the last four weeks we’ve not played our best cricket by any means and we’ve been out-played in every way nearly and so for people to keep turning up and supporting us even though it’s been how it’s been has been brilliant.”

“We talked about drawing a line after the second [T20] loss the other day and today being day one of our turnaround and trying to rebuild to being back to the team that we were and competing and pushing on and really trying to catch up the Aussies because they’ve played very well,” Knight said. “They’ve out-played us, they’ve won the key moments in the start of that series and then the momentum in the series was very hard to change. I’m really proud of how the girls stuck together and it’s nice to get a consolation win.”

Australia’s 3-0 sweep of the one-dayers set them up for the entire Ashes series, with Perry’s 7 for 22 in the third match a highlight followed by her 116 and 76 not out in the Test before Lanning’s brilliant knock in the opening T20.

Lanning said, as disappointing as finishing on a loss was, it did little to take the gloss off her side’s performance throughout the series.

“Disappointing tonight not to get the result but still very proud of the group as to how we’ve performed throughout the series, when the series was on the line were able to perform at our best, which is nice,” she said.