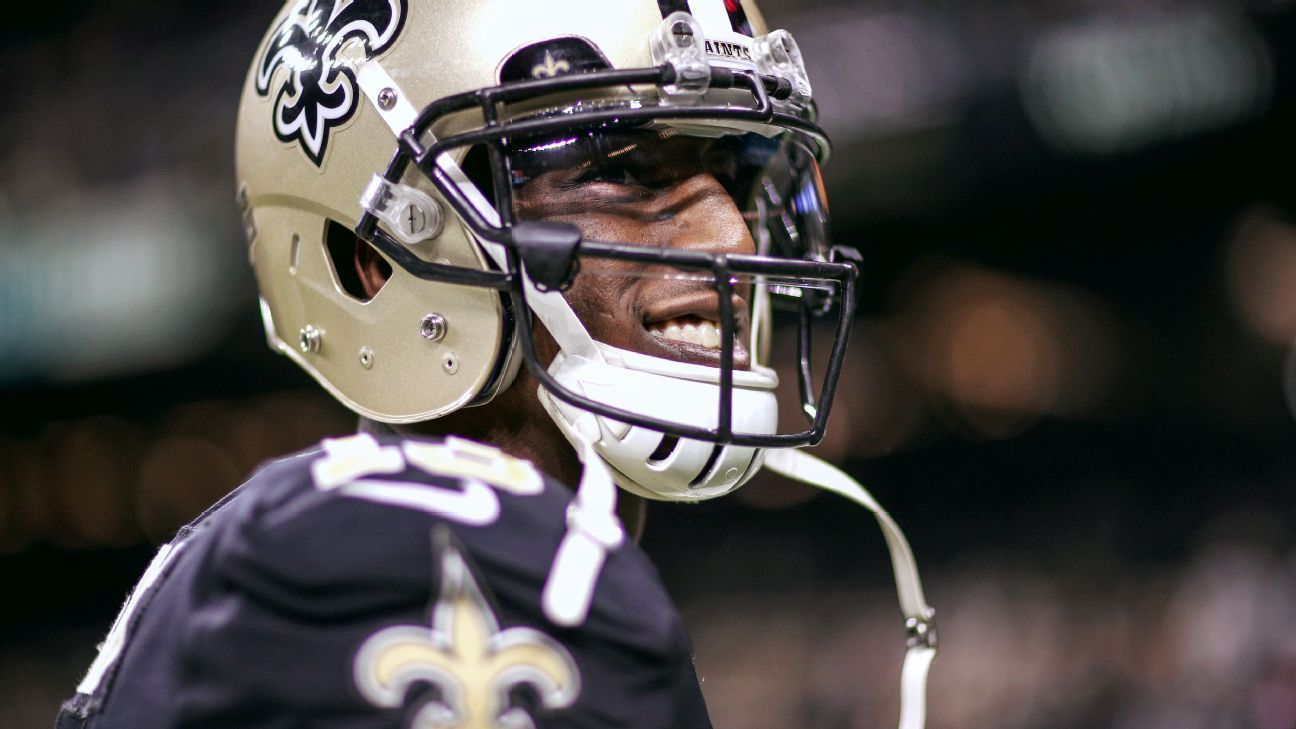 Michael Thomas will be at camp soon after signing a record-breaking extension with the Saints. Plus, Von Miller and Josh Allen grant birthday wishes, Baker Mayfield dishes on his relationship with OBJ, and Josh Rosen is gaining ground in the Dolphins’ QB competition.

Here’s what you need to know from camps across the league:

Jump to the best of Wednesday: Photos | Videos | Quotes

Top news of the day

Thomas is now tied to the Saints for the next six years, through the 2024 season.

Amazing @Cantguardmike. Only the beginning my brotha!!! CLEANER

All money in!! @Cantguardmike EARNED DAT 💪🏾

CB Bashaud Breeland on the collision with Tyreek Hill that knocked Hill out of Tuesday’s practice pic.twitter.com/Jai1Fw9jqh

Baker, on getting after his WRs in practice and his appreciation for his relationship with OBJ and Jarvis to be able to talk things out pic.twitter.com/vStqUum3V2

The construction workers at this structure overlooking Redskins training camp are @dallascowboys fans… 😂 (via @DarrenMHaynes)pic.twitter.com/D8qD6j3Iro

Can confirm, Harrison Phillips is not a problem for this Bills fan pic.twitter.com/dJo1EHplGX

Titans RB Derrick Henry is out here signing autographs for the fans. One thing to note: he is NOT wearing a walking boot. https://t.co/aCsWXsKQ0q pic.twitter.com/6Rk6wzT44l

Quotes of the day

“Whenever he tells me.”

Ravens WR Marquise Brown on how often he’s called upon to fulfill one of his rookie duties: driving QB Lamar Jackson home.

“You can’t shake the Grudens.”

New Redskins OT Donald Penn on a message from his former coach in Oakland, Jon Gruden

“Football, I love the sport. I’ve loved playing it since I was a kid. It’s hard for me to imagine doing anything else in life. I love playing ball. To still be out here at 41, soon to be 42, it’s a pretty great thing for me.”

Best of the rest from across the league

We are seeing improvement from Josh Rosen this week and that’s what Brian Flores has been asking for. He’s got to continue progressing to catch Ryan Fitzpatrick but he’s trending up. Eager to see how he does in the scrimmage and preseason.

It was a rough day for Ryan Fitzpatrick on Wednesday throwing two interceptions and a fumbled snap. Rosen was more steady.

QB Sam Darnold made a mistake on the first play of practice — he went the wrong way on a handoff — and he got “mad,” Adam Gase said. Apparently, a mad Sam is a good Sam. Darnold (12-for-15, 2 TDs) responded with his best practice of camp. What stood out was his ability to make plays outside the pocket, which he showed last season. Gase: “I like the fact that our quarterback is pretty good.”

Now that Ezekiel Elliott’s holdout has reached six days, the Cowboys can come after a portion of the running back’s prorated signing bonus, which is a little more than $613,000. After that it is an additional 1% for each day he misses up to a maximum of 25%. That could cost Elliott $1.02 million. This is in addition to the $40,000 in daily fines that can be assessed for missing each day. But the sides are still talking about a long-term deal.

Asked Daniel Jones about his biggest challenge so far at camp and he mentioned there was “a lot I haven’t seen before” in terms of defensive looks. Key is seeing it, learning and improving the next time.