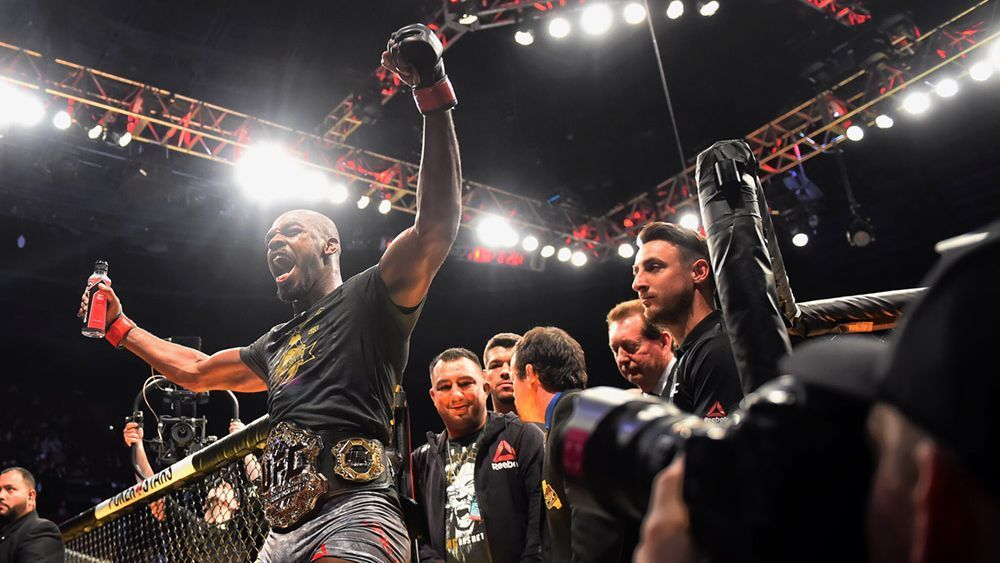 UFC 232 was a memorable event before the prelims ever started. The UFC’s decision to move the card from Las Vegas to Los Angeles will not be soon forgotten.

The return of Jon Jones to light heavyweight supremacy. The arrival of Amanda Nunes as the greatest female fighter of all time after an impressive victory over Cris Cyborg. There’s plenty to discuss in the aftermath.

What’s next for the winners and losers of UFC 232? Here’s ESPN’s take.

If this is going down a third time (and it certainly feels like it is), it might as well be next. Time isn’t on Cormier’s side. He’ll turn 40 in March.

As much as the notion of Brock Lesnar challenging Cormier for the heavyweight title in 2019 made no sense, I halfway supported it because Cormier swore he had only one fight left and wanted it to be with Lesnar. If Cormier is rethinking his retirement or what he wants out of that last fight, then sure, drop the Lesnar thing.

Honestly, I don’t think Cormier needs a third fight against Jones. If Lesnar really is available (and no one seems to really know if he is), that’d be a nice paycheck and a great way to ride into the sunset. Cormier has distanced himself and his legacy from Jones this year, and there’s a case to be made he shouldn’t reverse that.

But there are a lot reasons to run it back, too. And I vote they do it at heavyweight.

A former middleweight champion, Rockhold is on record saying he’s moving to 205 pounds in 2019. The UFC looked into booking this fight over the summer, but a Rockhold leg injury nixed those talks before they got off the ground.

I admit this may feel a little rushed for Rockhold, but I’m not sure that’s the worst thing. I don’t need to see Rockhold win four fights at 205 before he gets a title shot. I need to see him win one, against Gustafsson. For Rockhold, this would be a high-risk, high-reward fight. If he wins, it’s a path straight to the top.

And for Gustafsson, Rockhold is a nice name to add to the résumé. He’s in that tough spot, anyway, of having lost twice to the current champion. Whatever his future holds — whether it’s a change in weight class or another run at light heavyweight — a win over Rockhold would strengthen his position.

Amanda Nunes breaks down her fight with Cris Cyborg at UFC 232 and how she trained to handle the pressure of the moment.

Look, this sport tends to get out of control sometimes with the “immediate rematch.” I will be the first to agree with that. But there are times when it makes the most sense, and in this case, I really see it as a no-brainer.

And don’t give me the “but it was so definitive!” argument. I don’t care. It was a 51-second fight. If they fought again, would the same thing happen? I mean, maybe? Of course it’s possible. But this isn’t one of those instances where it became very clear over 25 minutes that Nunes was just far superior.

The best reason I can come up with not to do an immediate rematch is that we should let this result breathe a little. Celebrate Nunes’ accomplishment rather than demand she do it again. But here’s the thing: If she does it again, it would add even more to her legacy (more than defending her bantamweight title would), and if she were to lose, then we have the greatest female trilogy in combat sports history on our hands.

And to add one more thing, not only is Nunes the best option for Justino, she’s the best option by a wide, wide margin. We’ve been talking, for years, about the lack of opponents for Cyborg. And now, when she actually loses a fight for the first time in 13 years, we’re gonna move on from that and see her fight someone else? What?

Chiesa called out Magny in the Octagon … and I like it. Sensible callout. Realistic. Magny is coming off a knockout loss to Santiago Ponzinibbio, but he’s still a relatively highly ranked welterweight, with 14 UFC wins under his belt.

Don’t really have much to add to this one. Good matchup. Stakes for both sides. Way to go, Mike. You nailed this one.

Let’s acknowledge the obvious here: This wouldn’t be great for Smith. This would be a potential step backward for him. He’s ranked higher than Anderson, and while a win would solidify Smith’s position, it probably wouldn’t raise his stock much higher than it is now.

But if the Jones-Cormier trilogy goes down, what else is there for Smith to do? Maybe he pulls the Luke Rockhold matchup, instead of Gustafsson as I suggested above. But beyond that — if Smith doesn’t get Jones or Rockhold — this fight does make sense. Anderson is on a three-fight win streak.

Anderson called for this on Saturday, and it makes sense for him. The question is whether Smith will accept it, and that will likely depend on what options he has.

Volkanovski is on his way. That was an A-plus showing against a three-time title challenger in Mendes. He is a legit title contender in my eyes — but there’s a slight logjam in his way.

It’s not terrible, but at the moment you’ve got Frankie Edgar in line for his shot, and Jose Aldo and Renato Moicano fighting in February (arguably for the right to be on deck). It’s hard to envision Volkanovski cutting any of those three, without a fight in between.

Volkanovski vs. Rodriguez would be a main event-worthy featherweight matchup. And allow me to add, this division is going to be one of the most fun to monitor in 2019.