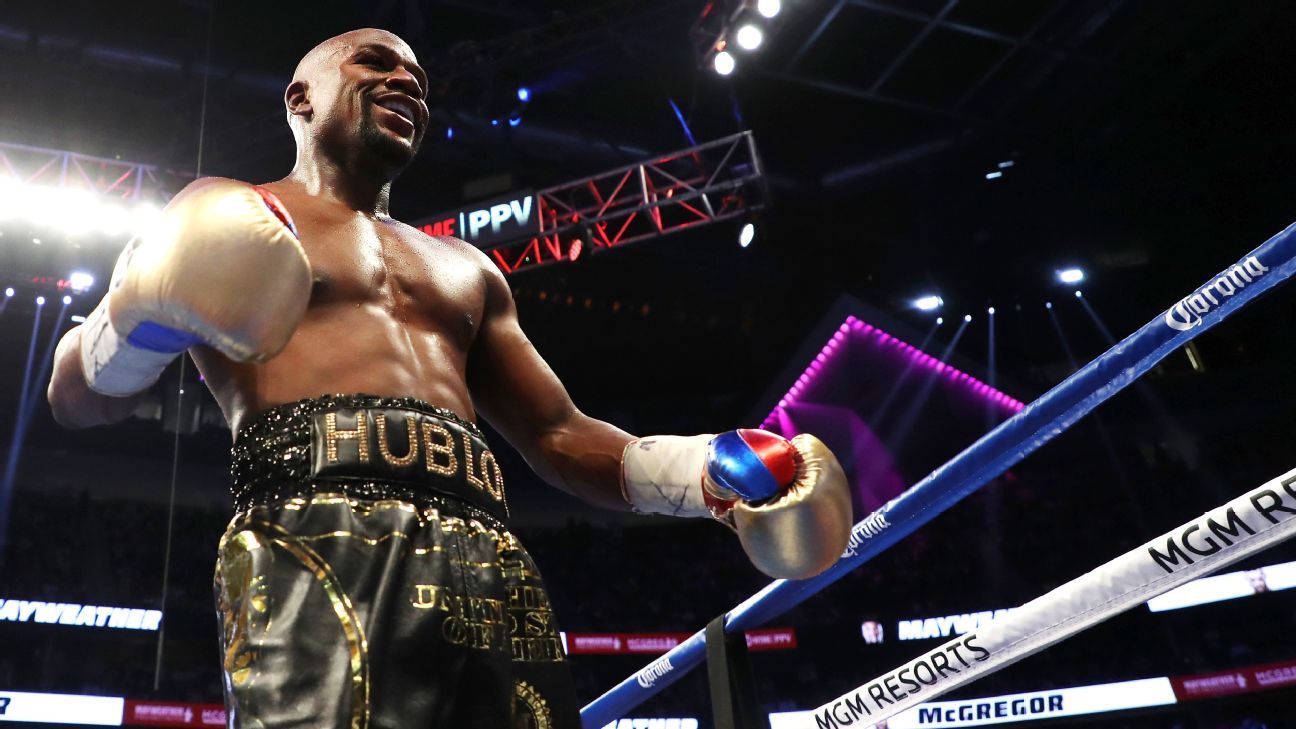 Floyd Mayweather dusted off the boxing gloves to deliver a boxing masterclass and stop Japanese kickboxer Tenshin Nasukawa in the first round on New Year’s Eve.

The former five-division world champion — now 41 — floored Nasukawa three times before the end of the first round of a three-round welterweight exhibition match.

Nasukawa’s corner threw in the towel after the third knockdown, and the 20-year-old was left in tears after being humbled by the retired but still masterful Mayweather.

Nasukawa was twice dropped with precise left hooks, before a short right hand put him down for a third time.

After his quick win, Mayweather kept his composure and perspective, as he insisted it did not change the fact he is still in retirement.

“It was all about entertainment, we had fun,” Mayweather said afterward.

“I’m still retired, I don’t look forward to coming back to boxing. I did it just to entertain fans in Japan. I’m still retured, I’m still 50-0 and Nasukawa is still undefeated, and a hell of a fighter.”

That pretty much kills talk of Mayweather being interested in fighting the winner of the January 19 contest between Manny Pacquiao and Adrien Broner. Filipino Pacquiao, who Mayweather outpointed in May 2015, is 40 now and holds a world title of sorts.

Despite being in retirement after stopping UFC’s Conor McGregor in his last professional boxing fight 16 months ago, Mayweather looked incredibly sharp.

Since this was an exhibition bout, with no official judges, this fight will not go down on Mayweather’s professional boxing record that remains at 50-0.

However, the ‘fight’ was still worth $9 million to Mayweather, according to what the American, whose nickname is “Money”, disclosed on social media recently.

There were doubts Mayweather would not turn up for the event against a kickboxer less than half his age at Saitama Super Arena, north of Tokyo, on a mixed martial arts (MMA) event organized by RIZIN, the largest MMA promoter in Japan.

Mayweather, who lives in Las Vegas, distanced himself from the promotion in November but turned up for the boxing-rules contest that was the last of 14 bouts.

A delay of over two hours did not help ease fears Mayweather was not going to show. When he finally showed, there was then protracted preliminaries before less than three minutes of action.

Nasukawa, 20, entered the ring with a 28-0 kickboxing record, and 4-0 MMA record, but he was outclassed by a clever boxer who still has his reflexes, timing and fast hands.

The bleach-blond professional kickboxer, who made his professional debut aged 16, claimed pre-fight: “I want to be the man who changes history. I’ll do that with these fists, with one punch — just watch.”

But Nasukawa never landed a single meaningful punch and did not see the three punches coming that put him down.

Mayweather began smiling and relaxed. It was like a game of skittles for him.

When Mayweather decided to to throw punches, it was not long before the first left hook landed on Nasukawa’s temple. The Japanese fighter stumbled to his feet and tried to get his jab working, in a desperate attempt to stop Mayweather’s forward march.

But Mayweather’s laser-like accuracy saw another left hook find the target. When Nasukawa began throwing more punches, after getting up from the second knockdown, Mayweather caught him with a short right and the home hero’s corner decided enough was enough.

Boxers have faced MMA fighters before: Mayweather, who first retired in September 2015, stopped Ireland’s McGregor in the tenth round in August 2017 and Muhammad Ali fought Japanese wrestler Antonio Inoki in a 15-round draw in 1976.

But this contest was never as competitive.