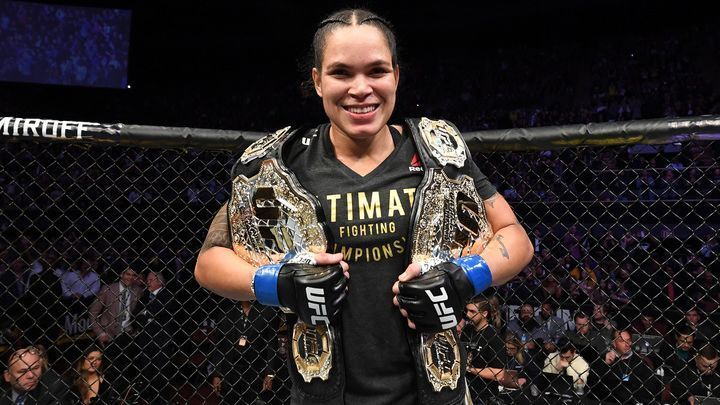 Amanda Nunes had just shown herself to be the Baddest Woman on the Planet. But then pure emotion took over.

Moments earlier on Saturday night, the 30-year-old Brazilian had stunned the mixed martial arts world by knocking out the unstoppable Cris Cyborg in 51 explosive seconds in Los Angeles. And as soon as the result was announced and Nunes was handed her two — two! — UFC belts, she surrendered to the moment and raced joyfully around the Octagon before leaping into the arms of her coach and sobbing.

This scene did not play out like the other two times in UFC history when a fighter became a two-division champion. Nunes didn’t spit out some scripted witticism about apologizing “to absolutely nobody,” à la Conor McGregor in the aftermath of becoming the first double champ back in 2017. She didn’t engage in low-rent WWE theatrics, à la Daniel Cormier in the wake of adding a second belt to his collection earlier this year. No, “The Lioness” just took her shiny brass-and-leather straps and ran with them, fueled by the raw passion of having scored one of the greatest victories in MMA history.

“Incredible!” That was the first word out of Nunes’ mouth once she stopped long enough to be interviewed under the bright lights while soaking in the crowd’s roar. That one word being inadequate to portray her emotions, she luxuriated in it long enough to turn it into four words. “In-cre-di-ble!”

To understand the magnitude of what Nunes accomplished on Saturday night, you have to begin with Cris Cyborg.

Her name is actually Cristiane Justino, but she is better known by a nickname that suggests superhuman abilities rooted at the intersection of technology and biology. When applied to Justino, the DC Comics superhero moniker is not so hyperbolic, at least in terms of fighting prowess. The 33-year-old former featherweight champion, who like Nunes hails from Brazil, has been fighting professionally for 13 years, and prior to UFC 232 she had lost only once, in her debut way back in 2005. Since then, Cyborg had gone 21 fights without a loss, knocking out 17 of her opponents, 10 in the first round. She’s been the closest thing MMA has seen to a peak Mike Tyson.

Now, Nunes is no Buster Douglas. She was an underdog, for sure — everyone who’s ever stepped into a ring or cage with Cyborg has had the odds stacked against her — but Nunes walked in as a champion herself, at bantamweight. She was riding a seven-fight win streak. Two years ago almost to the day, Nunes had brutally ended the career of Ronda Rousey with a first-minute knockout.

Amanda Nunes breaks down her fight with Cris Cyborg at UFC 232 and how she trained to handle the pressure of the moment.

But don’t ever mistake Saturday’s KO with the destruction of Rousey. By the time Nunes got to her, “Rowdy Ronda” already was a beaten fighter, having had her aura of invincibility blown to bits a year earlier by a Holly Holm head kick. No such shattering of confidence had ever slowed Cyborg’s roll. She was still mowing down the best the UFC could put in front of her.

No one has ever stood in front of Cyborg (and survived) the way Nunes did, though. These two spectacular fighters exchanged big punches right from the start of their UFC 232 co-main event, and Nunes didn’t shrink in the least. She stood right there in the pocket with the scariest slugger in MMA history, and her own speed and power proved to be simply too much for Cyborg.

The UFC is now on ESPN and ESPN+. Subscribe to ESPN+ to get: Exclusive live UFC events, weigh-ins and more; “Ariel and the Bad Guy”; Dana White’s “Contender Series”; and more exclusive MMA content!

Too. Much. For. Cyborg. Could anyone who follows MMA ever have imagined reading those words?

But that’s Nunes for you. She has staked her ironclad claim as the greatest fighter in the history of women’s MMA. Just look at her conquests. Along with the KO’s of Cyborg and Rousey, Nunes has twice beaten Valentina Shevchenko, who recently became UFC flyweight champ and sits right behind Cyborg and Nunes at No. 3 in ESPN’s pound-for-pound women’s rankings. And Nunes won her 135-pound belt with a first-round submission of another notable, Miesha Tate.

None of the rest of her accomplishments, however, stand as tall as what Nunes did Saturday night. As much as the shockwaves reverberating around the sport are a celebration of Nunes, they’re also a testament to the greatness of Cyborg. These two were matched in a superfight for a reason.

And now the UFC is left with a two-division champion who has slayed a couple of its biggest stars. Those are pivotal chapters in her story, but there is much more to be told, and that drama is going to need some co-stars who can perform under the bright lights. Now it is up to the storytellers at the UFC to push the tale of Amanda Nunes into the public consciousness.