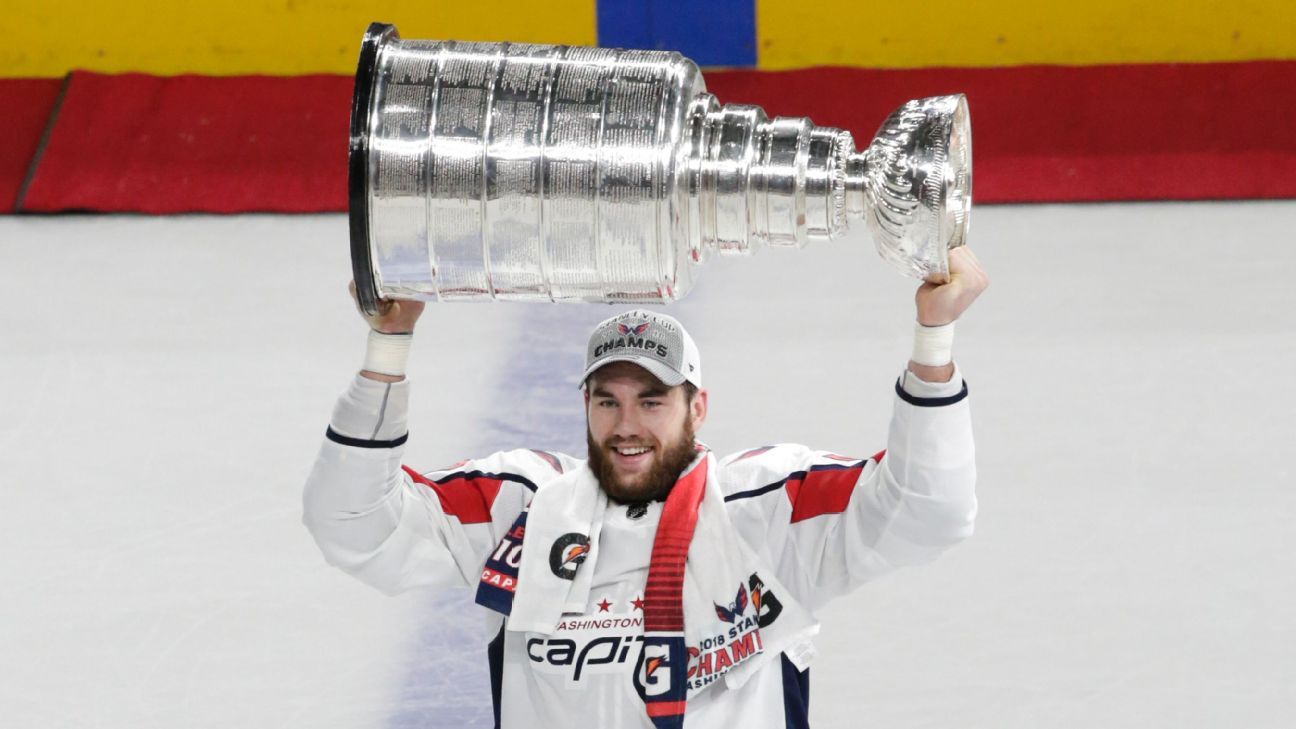 While Erik Karlsson might disagree, it’s been an eventful offseason in the NHL from a player transaction standpoint. Not only with the free-agent frenzy producing the John Tavares blockbuster and several other notable deals, but with teams hanging onto their own players on long-term extensions.

Here are five of the most-baffling contracts handed out in summer 2018:

Defending the virtues of Tom Wilson probably requires the round-the-clock management of a public relations crisis firm, but I’ll give it a shot:

His physicality can change the direction of a game or an entire playoff series, and his postseason offensive burst during the Capitals’ run to the Stanley Cup was impressive. That he can be thuggish and hang with elite offensive talent makes him a unique asset, and he’s only going to be 30 at the end of this contract. Rather than turning 30 after Year 3 of a seven-year deal, and having the world wonder if he’s cooked, which is what Milan Lucic — the Pokemon evolution of Tom Wilson — is dealing with in Edmonton.

All that said, I completely get the befuddlement and bemusement about Tom Wilson making $5,166,666 against the cap through 2024. When someone does one of those dollars-per-point breakdown of contracts in a few years, the Wilson deal is going to rank among the league’s most egregious. Unless he blossoms into a better scorer with increased power-play time, which is what GM Brian MacLellan seems to be wagering on.

It’s impossible not to look at Tom Wilson through the prism of Lucic, who previously played the role of hulking ruffian playing with elite talent while with the Boston Bruins. But Lucic was an exponentially better offensive player when he signed that seven-year deal with the Oilers for $6 million annually. Wilson has shown nothing thus far that indicates he’s capable of that production.

Sometimes, I’ll buy an item that’s priced slightly higher than suggested retail. Then I’ll catch grief from friends and loved ones for not exploring the roughly ten thousand ways in which I could have spent less money on said item, from shopping on Amazon to toiling in Target to coupons to buying one slightly used.

And I’ll say to them, “Hey, I don’t care … I like this item and I have this item and if it cost five dollars more than it logically should, so be it! I can afford it and I don’t have the desire to search out alternatives and that makes this all OK!”

This is essentially what the Vegas Golden Knights did with Fleury, whose extension kicks in for the 2019-20 season. There weren’t a bevy of teams frothing at the maw to hand $7 million against the cap to a goalie who’ll turn 38 in the last year of this deal. The Knights had the cap flexibility to bump him up $1.25 million annually on his average annual value (AAV), and they obviously have the financial wherewithal to over-compensate him, as Fleury’s $8.5 million salary in the first year of the deal currently makes him the 25th highest paid player in the NHL for 2019-20. Heck, how much money did his jersey alone generate for the Knights last season?

Look, the term is actually fine. Knights On Ice has a good breakdown of the regression of aged goalies, whose declines aren’t nearly as steep as those paid to score goals rather than prevent them. As GM George McPhee mentioned in defending the deal, Fleury is a guy who uses his quickness and flexibility to stop pucks rather than being “one of the big, lumbering ‘hit me’ goaltenders.” I don’t mind Marc-Andre Fleury on the roster at 38. Good dude in the room, and obviously the early face of this burgeoning franchise.

That latter point, one assumes, has as much to do with this contract as anything. His impact in the Knights’ inaugural season was such that the team won the West and played for the Stanley Cup. That was a priceless experience for owner Bill Foley; and it was worth $7 million annually for Fleury, whose contract is most certainly as much for services rendered as it is for what’s to come.

The term is defendable. The money is bonkers.

As we mentioned during the John Tavares aftermath, GM Lou Lamoriello has a penchant for illogical scrambling when major adversity hits his roster. Like when Scott Niedermayer decided to leave the New Jersey Devils and his response was to sign defensemen Dan McGillis (soon buried in the AHL) and a way-past-his-prime Vladimir Malakhov, who lasted 29 games before disappearing in the Pine Barrens … wait, no, check that: Before being traded to the Sharks in a cap blunder.

So Tavares leaves and Lamoriello brings in Valtteri Filppula for one year (that’s good!) and Komarov for four years (that’s … not good).

Komarov is a 31-year-old energy player and penalty killer who had the lowest points per 60 minutes of any forward at even strength play on the Toronto Maple Leafs for the last two seasons (0.91). Which means, yes, he was the offensive lesser to Matt Martin. His minus-195 Corsi differential also ranked him worst among Leafs forwards from 2016-18, by a significant margin.

“Hey, at least this guy is available” is how you end up with Kid Rock at the NHL All-Star Game and Leo Komarov on the Islanders.

One imagines a shorter deal in which Wilson proves that prowess would have been in order here, but the narcotic effect of winning the Stanley Cup and keeping the band together meant Wilson was going to get some job security here. And he did, along with financial security far beyond what an arbitrator might have handed him.

I love Jack Johnson at $3.25 million for the Penguins, as the next in a long line of reclamation projects for the team on its blue line. Sure, he’s 31. Sure, his underlying numbers don’t inspire much confidence. But for a short-term investment, it’s a signing that could pay significant dividends.

Wait, what was that? He’s signed for five years?

Yeah, that’s baffling. If ever there was a case study for a short-term “show me” contract, it’s here.

I know the counterargument is that the cap hit I love for Johnson can’t happen if he doesn’t have that term, but that’s like arguing for the low cost of a dentist that uses rusty tools and no anesthesia.

Heck of a gamble. But the Penguins have won these before.

Not every baffling signing falls on team management. Occasionally, you’ll get a player who undervalues himself or acquiesces to a hometown discount for inexplicable reasons.

Zucker is one such player. Getting a 26-year-old with 55 goals in his last two seasons in at $5.5 million against the cap for five years was an absolute steal for Minnesota and a weird discount for Zucker, who surrendered multiple unrestricted free agent years.

In the last two seasons, Zucker is 19th in the NHL in even-strength goals (46) and 26th in goals-per-game average (0.34), better than players like Joe Pavelski, Blake Wheeler and Evgeny Kuznetsov. Evander Kane, who has fewer total goals than Zucker in the last two seasons, pulled $7 million annually over seven years from the Sharks. The fact that Zucker can’t even see that neighborhood from where he is now is incredible.

As one NHL player agent said to me recently about Zucker: “He signed an RFA contract on what should have been a UFA deal.”

The former NHL star recently reviewed the state of the NHL product with a Russian media outlet, and his comments went viral:

Alex Kovalev is not a fan of the current NHL game. (source: https://t.co/AwSDCZrmuC) pic.twitter.com/7AMCS7cgtY

“The NHL is so uninteresting, you can only watch a few teams,” he said, before lamenting the sad state of the passing game in today’s league. “Much of it comes from coaches who are afraid of players’ mistakes, that these mistakes will affect them. Sometimes it’s clear that the player has the ability, but he is forced to throw the puck into the zone and then chase and hit. For me, it’s important to let the player open up, give him work to do without putting handcuffs on his hands.”

At this point, if coaches think the dump-and-chase is more effective than skating the puck into the zone, that’s basically grounds for dismissal. Eric Tulsky, now an assistant GM with the Carolina Hurricanes, presented evidence that skating the puck generated twice as many shots at the dump and chase … five years ago at the MIT Sloan Sports Analytics Conference.

I think what Kovalev is missing here is that coaches don’t actually see that players have the ability to skate the puck into the zone rather than dump and chase. That’s why the Golden Knights were so revelatory in the regular season: This collection of players, with nary a star, were allowed to skate in waves into the attacking zone. (It was actually a bummer to see Gerard Gallant and his staff opt for the dump and chase when the going got tough against the Capitals.) There was trust that they could play that style, and there was no downside to it: Again, Vegas won because there was no fear from the coach nor the players about screwing up in Year 1. Those conditions aren’t necessarily repeatable.

There are talent-laden teams that play this style, like the Winnipeg Jets, but by and large coaches probably feel like they don’t have the horses to do anything but dump and chase around defensive systems. Which leads to a logical conclusion for those who agree with Kovalev about the state of today’s game: Would it look more like Kovalev’s ideal if there were, say, 20 teams in the NHL rather than soon-to-be 32?

David Poile wasn’t in the U.S. Hockey Hall of Fame? Doesn’t everyone with, like, 10 years of service get in? Congrats, regardless. [Predators]

Hey, here’s an idea: Just let the NBA have Christmas Day, because the NHL could roll out its five biggest money rivalries and still be an afterthought [Sportsnet]

In which Lars Eller brings the Stanley Cup to Denmark for the first time in that nation’s history. [RMNB]

Really interesting look at home teams allocate their cap money amongst different positions. The Carolina Hurricanes‘ model is a fascinating one. [TSN]

Ranking the Florida Panthers‘ jerseys from worst to first. The Baby Blues were an interesting call. [Hockey By Design]

Re-imagining NHL teams has corporations, complete with slogans. The Ottawa Senators might have just found their new logo design. [Reddit]

The many branches of the Wayne Gretzky trade, which celebrated its 30th anniversary on Thursday. [Sporting News]

In case you missed this from your friends at ESPN

The top 300 players for the 2018-19 fantasy season. Congrats to Calle Jarnkrok for making the cut.