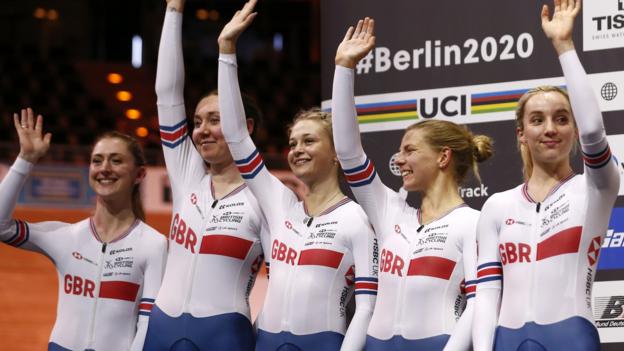 Katie Archibald, Elinor Barker, Neah Evans and Ellie Dickinson were beaten by almost two seconds by the US, who clocked 4:11.235 seconds.

Laura Kenny had earlier returned to the line-up, replacing Evans in the first round, to help them into the final.

The four-time Olympic champion had said she wouldn’t ride in the team pursuit because of her broken shoulder.

GB have now won silver in the event at three successive World Championships having won the Olympic title at Rio 2016.

“This is a stepping stone on the way to Tokyo, when you are so close you want to take gold, but we have to take the positives,” Evans, 29 told BBC Sport.

Barker added: “I think it is going to be really close when we get to Tokyo. The changes over the last few years – aerodynamically, physiologically, going to longer turns – have been interesting.”

It marks GB’s second silver medal of the championships after Jason Kenny, Jack Carlin and Ryan Owens won the same colour in the men’s team sprint on Wednesday.

Victory for the Americans comes less than a year after team-mate Kelly Catlin – a three-time world champion in the event – took her own life.

The team had Catlin’s initials painted onto their bike frames.

Chloe Dygert told BBC Sport: “It was a special achievement for us in the first worlds since Kelly’s passing and this race is dedicated to her.

“We had Kelly in our hearts and that got us to the line first.”

Fourth for Carlin and Walls

There was to be no medal for Carlin on Thursday, however, with the 22-year-old finishing fourth in the keirin final as the Netherlands’ Harrie Lavreysen won gold.

Jason Kenny, the current Olympic gold medallist in the event, had earlier missed out on the medal race, finishing eighth overall.

The six-time Olympic champion and Britain’s joint most successful Olympian had been forced to go through the repechage to reach the quarter-finals, which he breezed through in fourth place after two of the six riders crashed.

There was a fourth place finish too for Matt Walls in the scratch race final, which does not form part of the Olympic cycling programme.

The 21-year-old – who will race in the omnium on Saturday – told BBC Sport: “It was a pretty fast scratch race with a lot of things going on to get your head around and it was a definite improvement on last year.

“It is the most gutting place to finish but it is one of them you come away and learn from it and hopefully do better next time.”

Katy Marchant and Sophie Capewell were eliminated from the women’s sprint in the 1/8 and 1/16 finals respectively.

In the men’s team pursuit final, Denmark smashed their third world record of the championships – setting a new best of 3:44.672 – to beat New Zealand to gold.

The Danes – Lasse Norman Hansen, Julius Johansen, Frederik Rodenberg and Rasmus Pedersen – had broken the previous world record of 3:48.012, set by Australia at last year’s World Championships, in qualifying and then again in the first round.

GB, the Olympic champions at the last three Games, failed to reach the medal races on Wednesday and have yet to go under 3:50.

BBC pundit and 1992 Olympic individual pursuit champion Chris Boardman said: “I think that was the moment Denmark finally found out what they were capable of.

“Three [minutes] 50 [seconds] used to be the barrier, it was only recently broken and suddenly there are half a dozen teams capable of doing that and this one is heading fast towards 3:40.”

A timeline of Khabib vs. Tony Ferguson — is it off again?
Eoin Morgan says England players are ‘open to helping in whatever way possible’
L.A.’s Turner: Once back, end extras in HR derby
Japanese boxing pushed from early- to mid-May
Source: Broncos DE Harris back on 1-year deal