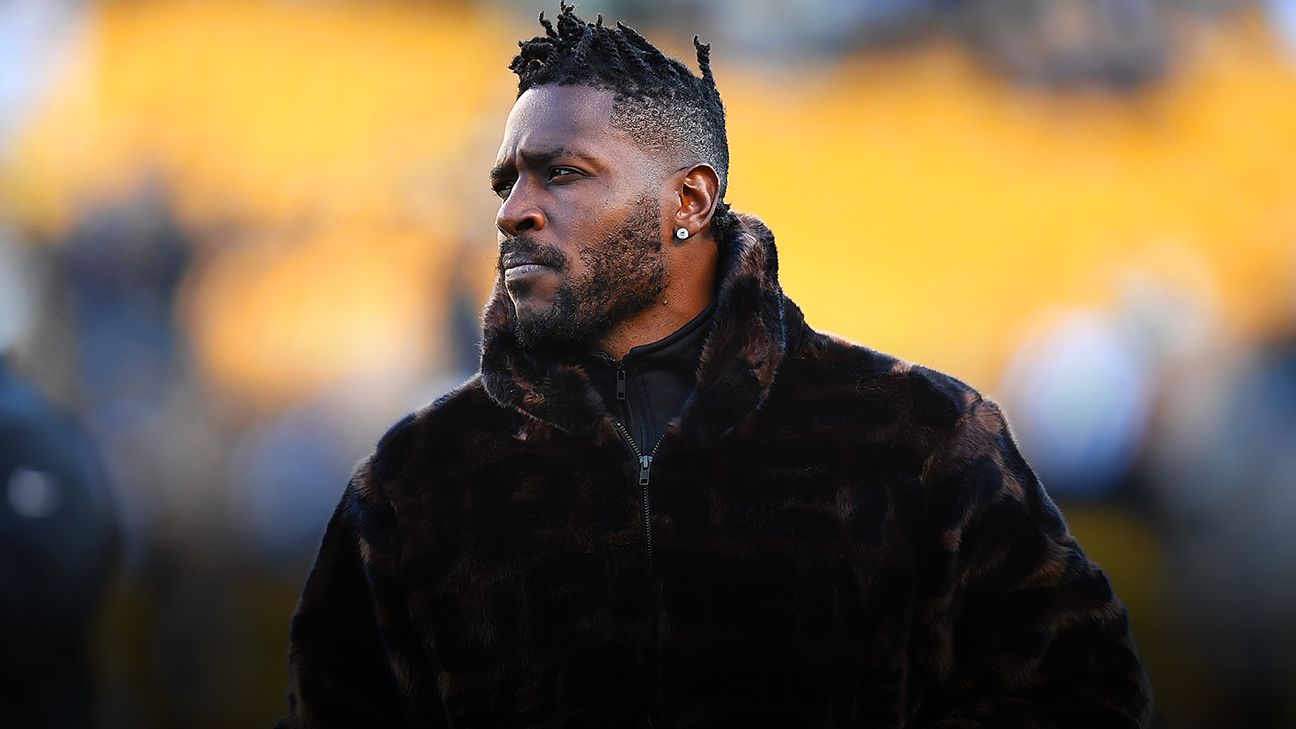 HOLLYWOOD, Fla. — Antonio Brown turned himself in to Broward County Jail on Thursday night in response to an arrest warrant filed against him on three charges.

Accompanied by lawyers and friends, Brown arrived in a turquoise suit prepared to face his outstanding charges of felony burglary with battery, burglary of an unoccupied conveyance and criminal mischief stemming from a Tuesday incident outside his home in which he allegedly assaulted a moving truck driver.

This marks the end of a multiday waiting period as police attempted to speak with Brown with no success and then waited all day Thursday for him to turn himself in.

Brown’s trainer, Glenn Holt, was arrested Tuesday on a felony burglary with battery charge stemming from the incident. He was released Wednesday after posting a $20,000 bond.

Brown threw a rock at the driver’s moving truck before the alleged battery outside of his home Tuesday, according to court documents obtained by TMZ.

The documents allege that Brown later forced his way into the driver’s side of the main cabin of the truck and began to physically strike the driver after a disagreement over payment escalated. Brown was then restrained by his associates.

The court documents obtained by TMZ state that the moving company was hired by Brown to deliver belongings the receiver had stored in California to his home here.

Brown, 31, allegedly refused to pay the $4,000 fee, which initially led the driver to attempt to leave with the property in his truck. According to the documents obtained by TMZ, Brown then threw the rock, denting and causing paint damage to the driver side of the vehicle. The driver then called police to report the damage.

Later, the documents say, the moving company told the driver to drop off the goods because Brown agreed to pay the fee plus damages he caused. Upon arrival, however, Brown paid the $4,000 fee but refused to pay more.

Another argument ensued, and that’s when, the driver alleges, Brown assaulted him, and Holt attempted to grab his keys from the ignition to open the truck and get Brown’s belongings, causing cuts and scratches on the driver.

A source told ESPN that Brown was upset because the shipment, which contained a large number of his designer clothes and shoes, took more than six weeks to arrive. He also had a now-fired associate sign for the shipment and that person did not inform Brown that he would owe $4,000 upon arrival.

Brown’s home is located in a gated community in Hollywood. Multiple neighbors told ESPN that they are fed up with the antics coming from the home, including multiple police encounters this month.

Brown, 31, is being investigated by the NFL under its personal conduct policy following a lawsuit filed by his former trainer, Britney Taylor, that alleges she was sexually assaulted by Brown on multiple occasions. Brown also was accused of sexual misconduct at his home by an artist who was working there in 2017.

Brown has officially been served lawsuit papers from Taylor, sources told ESPN, and has hired attorney Camille Blanton to handle his case.

Brown played in only one game this season — for the New England Patriots in Week 2 against the Miami Dolphins. He was released by the Oakland Raiders before the season and by the Patriots before Week 3, after it was made known that he sent text messages to the artist accusing him of misconduct.

Brown has filed eight grievances against the Raiders and Patriots, a source told ESPN’s Dan Graziano. He is seeking $39.775 million in lost salary, bonuses and guaranteed money