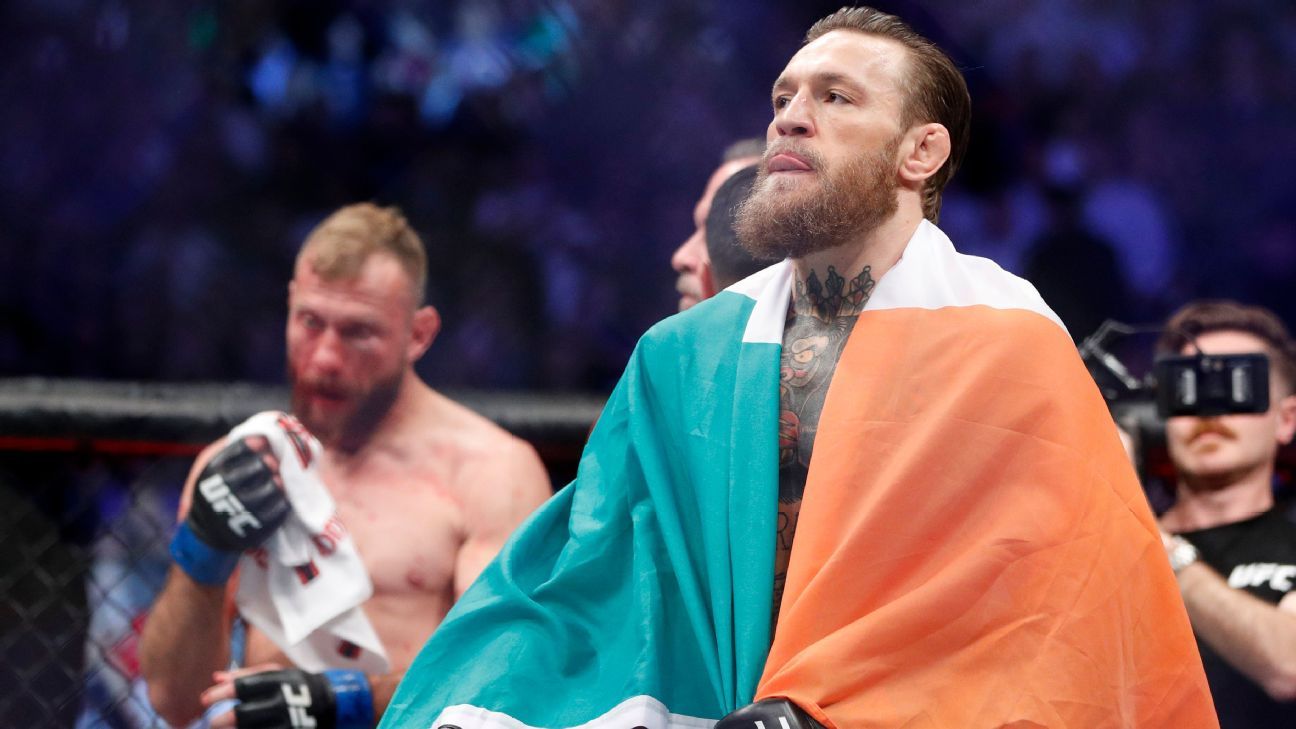 Conor McGregor came into 2020 saying he wanted to treat the year like a season and fight at least three times following a lengthy layoff. That remains the plan, according to his longtime coach John Kavanagh.

McGregor knocked out Donald Cerrone in just 40 seconds in the main event of UFC 246 on Saturday night in Las Vegas. He came out of the bout completely unscathed –Cerrone didn’t land a single strike. Kavanagh said Monday on Ariel Helwani’s MMA Show that he believes McGregor will step into the Octagon again before summer.

McGregor said in the post-fight press conference Saturday that when he fights next is more important right now than whom he fights. In reality, both are major questions.

Kavanagh laid out a possible plan for McGregor on Monday. Khabib Nurmagomedov is scheduled to defend his lightweight title against Tony Ferguson at UFC 249 on April 18 in Brooklyn. If someone were to get injured and withdraw from that bout, McGregor would stay ready so that he can step in, Kavanagh said. McGregor has said several times he doesn’t believe that fight will happen.

If Nurmagomedov vs. Ferguson does go on as planned, Kavanagh proposed that McGregor then fight someone like Justin Gaethje in a welterweight bout “within a few weeks” of April 18.

“Then you’re kind of on the same timeline for a fight [against the Nurmagomedov-Ferguson winner] a couple of months after that,” Kavanagh said.

The coach said if it were up to him, McGregor would stay at 170 pounds where he fought Cerrone and only cut to 155 if a belt was on the line. That would avoid damaging weight cuts.

“Otherwise, why would he do it?” Kavanagh said. “Stay at this weight, don’t cut weight and then when the big one comes along then shed the last 15 pounds [for a title bout].”

Kavanagh prefaced it by saying all of this was his own personal preference. McGregor’s manager Audie Attar was also on Helwani Show on Monday and he wasn’t firm about a timeframe or an opponent for McGregor’s return. Attar did say it was “absolutely” a possibility McGregor is back before summer.

“A prepared Conor McGregor is a Conor McGregor I think everyone wants to see,” Attar said. “… Let’s see what motivates him. That’s the most important thing.

“It could be Jorge [Masvidal]. It could even be [former featherweight champion Jose] Aldo. Right now what we need to do still is enjoy the moment, process everything that happened and get back to work.”

Masvidal was in the front row at T-Mobile Arena on Saturday. He wants to fight McGregor next and his year in 2019 made him one of the biggest stars in the sport. McGregor, though, didn’t really call him out and Masvidal has plenty of doubts about whether or not he is the opponent McGregor wants next. Masvidal said if McGregor doesn’t want to fight, then welterweight champion Kamaru Usman would be next for him.

“All I know is that [McGregor] doesn’t want the fight,” Masvidal said. “We’re moving on. … He sealed Usman’s fate now. This guy doesn’t want to f—ing fight, man.

“I would take a lot more pleasure in dismantling Usman’s face than I would Conor’s. I would have a sincere joy inside of me, like a kid at Christmas opening numerous gifts, if Usman was the guy I got to baptize.”

Usman was also at UFC 246 and spoke about an injury to his thumb. It’s unclear when he might be able to compete next. Usman sustained the injury in his TKO win over Colby Covington last month at UFC 245.

If McGregor doesn’t want the fight and Usman is injured, Masvidal’s manager Abe Kawa said that would open the door for a rematch with Nate Diaz. Masvidal beat Diaz by TKO at UFC 244 last November to win the mythical BMF title at Madison Square Garden.

“We are patient individuals,” Kawa said. “Patience is a virtue. We’re going to be patient and wait.”