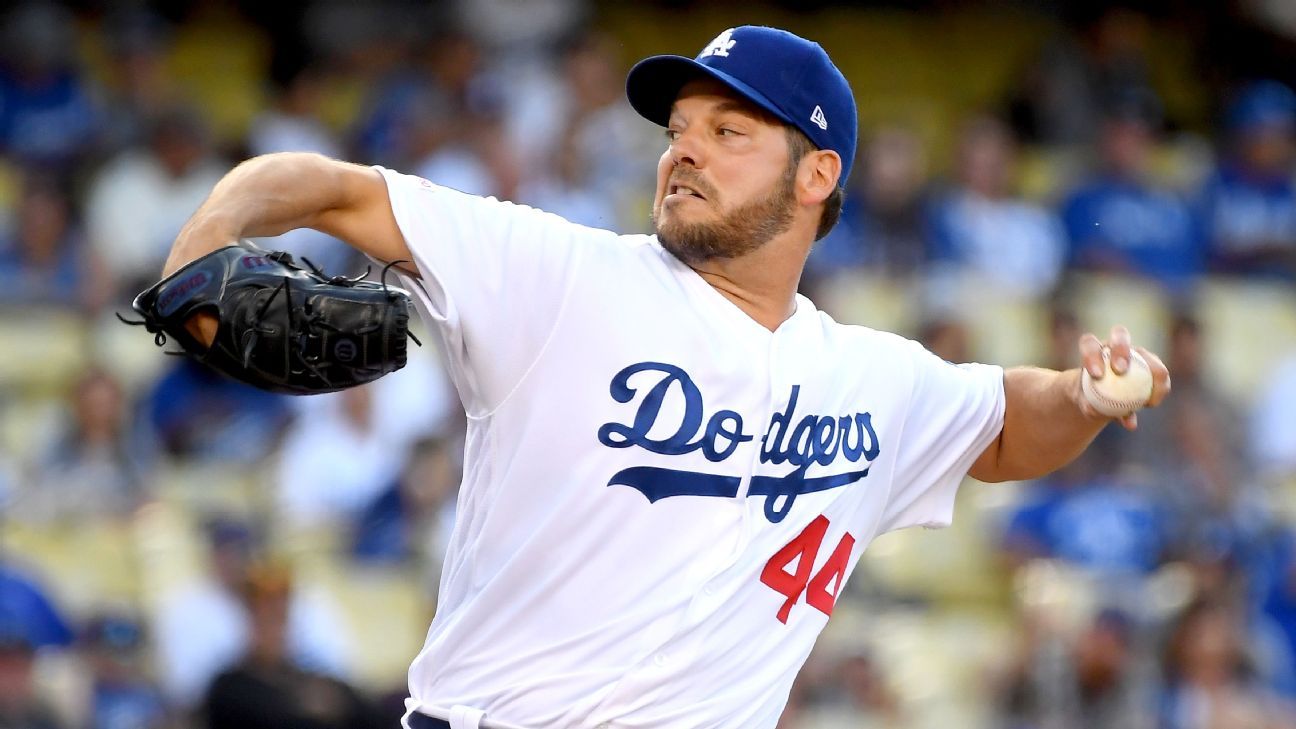 Sources told ESPN’s Jeff Passan that Bailey’s deal is for $7 million, while Hill gets $3 million.

Hill, who will turn 40 on March 11, is not expected back until midseason after having what’s called primary repair surgery, which has a recovery time of six months.

He is returning for his 16th season in the major leagues. He worked his way back three times from an arm injury and two knee injuries to finish the 2019 season with the Los Angeles Dodgers.

The 33-year-old Bailey finished last season with a combined 13-9 record, 4.57 ERA and 149 strikeouts for the Oakland Athletics and Kansas City Royals, who acquired him for minor league infielder Kevin Merrell before the July trade deadline.

Hill’s career has taken him on a winding path in which he suffered a torn labrum, underwent Tommy John surgery, temporarily converted into a reliever, pitched in the independent league and shuffled through eight different major league organizations.

He did not establish himself as a major league starter until he was 27 years old, and he didn’t necessarily blossom until the age of 36, when the crafty left-hander won 35 games, pitched 378 2/3 innings and posted a 3.09 ERA from 2016 to 2018. The Dodgers acquired Hill from the Oakland Athletics in August 2016, then signed him to a three-year, $48 million extension four months later.

The Dodgers valued Hill for his devastating curveball, his competitive spirit and his clubhouse presence. Hill was slowed coming out of spring training in 2019, then carried a 2.55 ERA through about eight weeks until suffering a flexor tendon strain in his left elbow on June 19.

Upon returning on Sept. 12, Hill re-aggravated a knee injury he suffered earlier in the season. It was thought that his season — perhaps his career — was over. But Hill fought to make it onto the Dodgers’ postseason roster, recorded eight outs in Game 4 of the National League Division Series, and then, upon elimination, stated his intentions of continuing to pitch.

Hill received the Tony Conigliaro Award, which goes to a major leaguer “who has overcome adversity through the attributes of spirit, determination and courage” of the award’s namesake.

Hill and his wife were arrested and fined over an altercation with police at a New England Patriots game on Dec. 23. Hill was charged with disorderly conduct and resisting arrest after he tried to stop police from putting Caitlin Hill into a police vehicle after she was arrested on disorderly conduct and trespassing charges for repeatedly trying to enter Gillette Stadium with an oversized bag and refusing to leave the area when ordered by police.

Bailey struggled through the first six weeks of the 2019 season, but his split-fastball became more dominant as the season went on. He had a 2.28 ERA and 21 strikeouts over four starts in September, giving the A’s some additional help as they made a late run to a wild card berth in the second half.

The veteran right-hander made 31 starts last season, his most since 2013, to show that various health issues that have plagued him in the past — he started the season on the disabled list each year from 2015-17 — are firmly behind him.

Bailey spent his first 12 seasons with the Cincinnati Reds, making 212 starts and going 67-77 with a 4.56 ERA. He was traded from the Reds to the Los Angeles Dodgers as part of a seven-player deal that included Yasiel Puig and Matt Kemp in December 2018, which meant Los Angeles paid the majority of the $23 million that remained on the $105 million, six-year contract signed with the Reds in 2014.

Bailey, who was released after the 2018 season, signed a minor-league deal with the Royals in February.

He has thrown a pair of no-hitters, the first against Pittsburgh in September 2012 and the other against San Francisco the following July. He won 24 games over those two seasons.