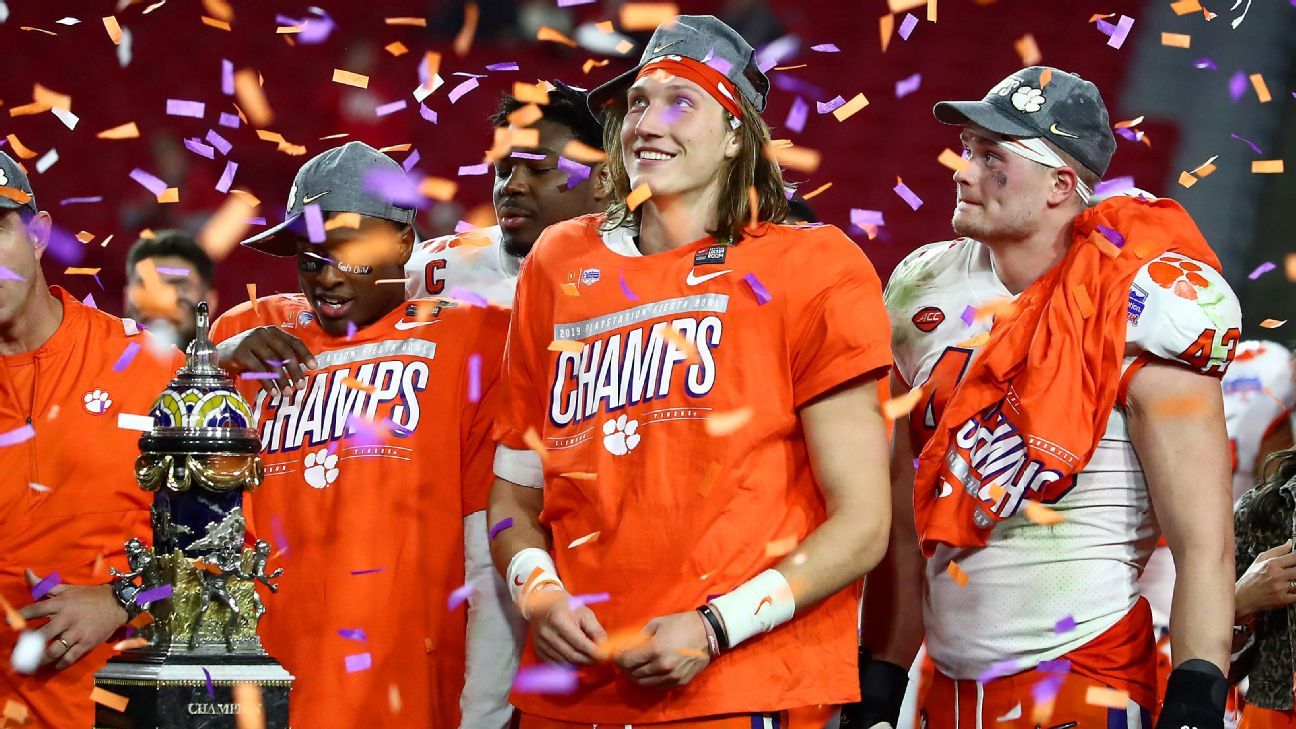 GLENDALE, Ariz. — Clemson co-offensive coordinator Jeff Scott felt like he was in a time machine Saturday night listening to sophomore quarterback Trevor Lawrence in the huddle just prior to the kind of game-winning drive that has become a staple in Tiger Town.

“It brought back memories of Deshaun [Watson] talking to those guys down in Tampa two years ago. It was pretty awesome,” Scott said of Watson’s message to his teammates prior to Clemson’s game-winning drive to beat Alabama for the 2017 national championship.

That message has become the cornerstone of Clemson’s football program, as 29 straight wins and another shot at a national championship will surely attest.

The debate will forever rage about who was the better team, more deserving team or even the most talented team Saturday night inside StateFarm Stadium.

But no team has mastered the art of winning any better the last two years than Clemson, which rallied from a 16-0 deficit to beat Ohio State 29-23 in the College Football Playoff semifinal at the PlayStation Fiesta Bowl.

The Tigers will now try to become college football’s first repeat national champion since Alabama in 2011 and 2012 when they take on LSU on Jan. 13 in New Orleans at the College Football Playoff National Championship Presented by AT&T (8 p.m. ET, ESPN and the ESPN App).

“People have been saying we haven’t played anybody all season,” Clemson receiver Tee Higgins said. “This just shows that we have that dog in us. We have that fight, and we can pull it off playing any team out there.”

And while there was constant scrutiny surrounding the Tigers’ cushy schedule this season, one that featured just one win over a team in the College Football Playoff selection committee’s final ranking, nobody’s scrutinizing Clemson’s penchant for delivering on the biggest of stages.

That’s why Scott never flinched when he heard Lawrence lean into that huddle, look his teammates in their eyes and tell them to lock in. Ohio State had just gone ahead 23-21, but Clemson answered right back with a four-play, 94-yard drive capped by a 34-yard touchdown pass from Lawrence to running back Travis Etienne with 1:49 to play.

“Even though it was an amazing drive, being around here this long, it was not surprising,” said Scott, who will move on as South Florida’s head coach following the national title game. “It would have been more surprising if we had not gone down and scored, and I think that says more about these guys than anything.”

All week, Swinney’s message to the team had a familiar ring to it.

Dabo Swinney commends the Buckeyes’ toughness throughout the Fiesta Bowl, but says his Tigers showed the “heart of a champion” in their wire-to-wire victory.

“This is where we belong. This is normal for us,” Scott said, recounting what Swinney told the players. “We felt like the experience we’ve had on this stage, because this is different, but we felt our experience would be a factor against them, and I think it was, especially us getting down and not panicking and understanding it’s a four-quarter game.”

The mere fact that Clemson was even in a position to win the game in the second half was borderline miraculous. Ohio State charged out to a 16-0 lead, but it probably should have been more like 28-0.

The Buckeyes twice were inside the Tigers’ 10-yard line with first-and-goal situations, but were held to field goals. And then there was the targeting penalty on Ohio State safety Shaun Wade in the first half that completely changed the complexion of the game and kept alive a Clemson scoring drive.

“I was mad as hell, pissed off that the ref didn’t call it originally,” Clemson offensive guard John Simpson said. “It was clear, obvious, but I was mad, but everybody is going to be mad when their quarterback gets hurt.”

Lawrence passed for two touchdowns in the game, but it was his 67-yard touchdown run where he ran away from Ohio State defenders that really put a charge into his Clemson teammates and pulled the Tigers within 16-14 just before halftime.

“Trevor is just a great player, competitor and whatever it takes, running it and throwing it,” Scott said.

Simpson joked, “I didn’t think he was slow, but I didn’t know he had that kind of speed.”

Crippling mistakes plagued Ohio State, as did a couple of calls by officials that will sting for a long time in Columbus. The Buckeyes thought they had a touchdown in the third quarter after returning a fumble forced by Jeff Okudah. Clemson’s Justyn Ross appeared to take a few steps before losing the football, but a review of the play overturned the touchdown.

“When you get an opening, you gotta take it,” Clemson’s Amari Rodgers said. “That’s the way this game goes, and we took it. We never doubted that we were going to win this game.”

“There were a lot of calls that were not good, but we should have never let it get to where we had to depend on those calls,” Dobbins said.

Even after the touchdown drive to take the lead, Brent Venables’ defense had to hold one more time, as safety Nolan Turner intercepted Justin Fields in the end zone.

“Everybody thought, ‘Well, they haven’t played anybody, and now they’re going to get tested,’ ” Venables said of the narrative surrounding Clemson coming into the game. “But we do. Ask our offensive guys. Ask our defensive guys. When we go on that practice field, the mindset is we we’re going to win, win every inside drill, every team pass, everything.

“There’s a lot at stake every week, but these guys are unbelievable. They’re uncommon. They really are.”