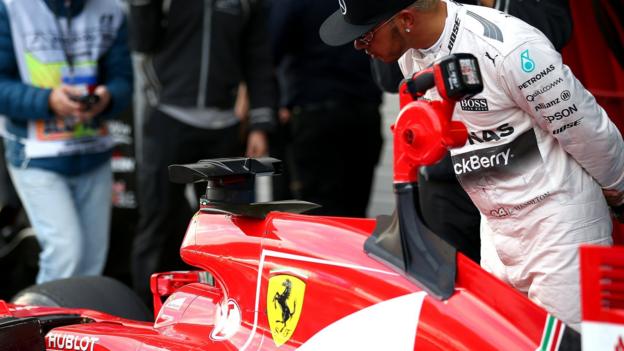 The 2019 Formula 1 season is not quite finished but already minds in the sport are turning to the future – and particularly that of Lewis Hamilton.

Pretty much all the top drivers are out of contract at the end of next year, so the 2020 transfer market promises to be particularly interesting. And Hamilton will be at the centre of it.

The world champion has never indicated any desire to leave Mercedes, but he has inevitably been linked to Ferrari on and off through his career, and this weekend has seen the latest example.

Italy’s Gazzetta dello Sport ran on Saturday with a splash headline saying Hamilton had met Ferrari chairman John Elkann twice this year, in what the paper said was an attempt by Ferrari to “chat him up”.

That followed team boss Mattia Binotto saying in a news conference in Abu Dhabi on Friday: “Lewis is certainly an outstanding driver, a fantastic driver. Knowing that he’s available in 2021 can make us only happy, but honestly it’s too early for any decision.

“We are happy with the drivers we’ve got at the moment and I think certainly at one stage next season we will start discussing and understanding what to do.”

In F1, the driver transfer market is known as the ‘silly season’. There was a time when it happened in August and September before the following year. It has been creeping earlier but this is probably the first time it has started before the end of the season before the one in question has even started.

Perhaps it’s a reflection of the fact so many big names will be out of contract at the end of the year – Mercedes drivers Hamilton and Valtteri Bottas, Red Bull’s Max Verstappen and Ferrari’s Sebastian Vettel are certainly available. The status of Ferrari’s Charles Leclerc is less clear, as while he is known to be on a long-term deal with Ferrari, the exact nuances of it are not publicly available. So possibly him, too.

Inevitably, Binotto’s comments and the Gazzetta story proved a major talking point on Saturday at the Abu Dhabi Grand Prix, and Hamilton was asked about it.

“This is the first time I’ve heard of that,” he said, referring to Binotto’s remarks. “I think that’s the first compliment I’ve had from Ferrari in these 13 years.

“I honestly don’t remember them ever mentioning me, so thank you, I’ll take it. Doesn’t really mean anything, it’s all talk but yeah, it’s nice that finally… it’s taken all these years for him to recognise maybe, but I’m grateful.”

Pressed on whether he would be interested in a move to Ferrari for 2021, Hamilton said: “It’s never a waste of time to be nice to someone. It has been a long, long time and a team that I’ve always appreciated over the years, so to earn their respect from someone from there who’s obviously very high up is obviously not a bad thing.

“They’ve got two great drivers as is, so who knows what the driver market’s going to be doing over the next year?

“But if I’m really honest, I’m not really focused on that right this second: trying to make sure I finish off strong. I’ve got this incredible group of people who hire me where I am and I feel like I just continue to owe it to them to give my heart to them and my energy 100% to them, particularly as I’m still in contract and negotiations haven’t started yet.

“I honestly don’t know how the next phase of the months is going to go when it comes to contract. It’s very odd that you have to do it almost a year before it ends and it can’t be done towards the end, but that’s just the way it goes. We shall see.”

When Hamilton has been asked this question in the past, he has always tended to emphasise the strength of his bonds with Mercedes, how long they have been together, the fact he has been supported by them since he was 12.

In Brazil two weeks ago, he said: “When you’ve been with a team for so long, we are kind of joined at the hip. All that small detail can take its time. It’s no real stress, our word is our bond has been all these years and we’ve always had that. Mercedes since I was 12 have always stood by their word and vice versa.

“But you need to set some time aside to say: ‘Where are we? What’s the next goal? What else are we planning?’ Because it rolls over for the future. And that in itself can be time-consuming. And, sure, once you have put something in place you’re always later: ‘Oh damnit, we could have done this.’

“It is trying to have as much foresight as possible. But I have not found it distracting in the seasons when we have been doing it through a season, so it is not about rushing things.”

Hamilton will have a lot to weigh up when he makes this decision. As he seeks to keep winning as long as he stays in F1, he will want to have the most competitive car. But he will also have an eye on Mercedes as a brand and the strength of their relationship and how much they could do together in the future, long after he hangs up his helmet.

In Abu Dhabi, Ferrari neither confirmed nor denied whether Hamilton had met Elkann; a spokeswoman simply said she did not know.

At Mercedes, team boss Toto Wolff was also asked about it, and he said: “I am totally OK with that. This is a free world and I recognise that everybody needs to explore career options and make the best decision for themselves, drivers and everybody else.

“So I am very open about this. I have started to embrace the fact that everybody has objectives and needs to have the best possible opportunity for his career so in that respect I am absolutely open for everyone to explore options. My personal priority for the team would be to continue this successful journey, we are really benefiting from a healthy relationship.

“How the values within the team are, loyalty and integrity are number one on the list and understanding Lewis’ position and objectives will be key for any decision we take.

“We will not embark on a fishing mission with potential drivers out there before Lewis and us have had that discussion. That hasn’t taken place because we wanted to wrap up the season and we wanted to see how it goes. We have a consensual relationship. We need both sides to be happy.”

There are other complexities in this, as well – not least the fact no team is contractually committed to F1 beyond 2020.

The teams are in negotiations with F1 over the financial terms of their contracts and have been for some time. The uncertainty – and the complexity of the global car market – has led to speculation as to whether Mercedes will continue in F1 beyond next year.

Hamilton said on Thursday: “Mercedes is here to stay.” Asked whether that was confirmation they would be in F1 beyond 2020, he added: “It is not an announcement but I am pretty sure Mercedes is here to stay. The board members are here this weekend so I will double-check with them. They are all hardcore racers and I am pretty sure they want to stay.”

All the indications at the moment are he is right because F1 works for Mercedes both financially and in terms of exposure.

And Ola Kallenius, the chairman of the Daimler board, said in an investor call on 14 November: “F1 has been an activity in terms of our marketing and branding strategy that has paid off handsomely in the last few years. You have to look at these investments in a rational way.

“We weigh all our marketing and media investment in terms of reach, impact and cost. If you use the Nielsen method to measure the media value of our F1 activities, they are north of €1bn a year. So an extreme reach and impact from this activity. And the costs – that we would not like to disclose publicly – are surprising low because there is a cost and revenue side in F1. We are committed.”

Right now, the smart money would be on Hamilton continuing in F1 in 2021 and staying with Mercedes.

“We need to push very hard to provide the drivers with the quickest possible car and if we are able to do this, I am 100% convinced we will have the best possible driver line-up and everything points to our relationship continuing. But in life you never know.”

One more spin around the block

Hamilton has got what he wanted in Abu Dhabi so far – a pole position to end a season in which the only minor blot on his record had until that point been that team-mate Bottas had more poles than him.

Hamilton had made it clear that irked him, so he was delighted with a superlative lap to make them five each in terms of poles and which put Hamilton 14-7 ahead on their qualifying head-to-head.

He is hot favourite, too, to take his 11th win of the season, which would equal his best tally for a year.

Bottas has been demoted to the back with a penalty for using too many engine parts and on the face of the weekend so far, neither Red Bull nor Ferrari look quite on Mercedes’ level.

Verstappen said: “We just seemed to lack a bit of grip compared to them. They are always really dominant on this track and we are just lacking a bit too much in that last sector.

“We have to be realistic and I think Mercedes is really quick but we will give it everything we have in the race.”

But Mercedes are wary of all threats and while Ferrari were not competitive on the soft tyre in qualifying, Hamilton pointed out that Leclerc had topped second qualifying on the medium tyre, albeit Mercedes had not done a second run, and Wolff said Ferrari’s race pace on the hard in Friday practice had also been impressive.

The Ferraris being on split strategies – with Leclerc starting on the medium like Hamilton and Verstappen, and Vettel on the soft – also complicates matters.

“Red Bull was the strongest compared to us on the long runs but Ferrari are fast on the straights and that gives them overtaking opportunity,” Wolff said, “and I think all of us will have a chance for the victory tomorrow.”

Hamilton has walked the championship but the racing has been terrific for much of the year. Abu Dhabi is not famous for exciting races – to say the least – but it would be nice to end the season on a high.

Not many would bet against Hamilton, though.