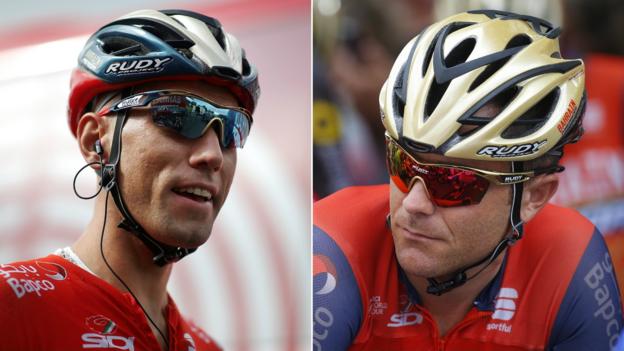 Bahrain-Merida rider Kristijan Koren and sports director Borut Bozic have been given two-year bans for doping by the International Cycling Union.

The Slovenian pair were provisionally suspended in May as part of the Operation Aderlass doping inquiry.

Koren’s violations relate to 2011 and 2012 when he was with the former Liquigas team, while Bozic’s relate to 2012 while a rider with Astana.

Bozic, 39, retired in 2018 to take up a sports director role at Bahrain-Merida.

Koren, 32, joined Bahrain-Merida in 2018 and was withdrawn from this year’s Giro d’Italia after the provisional suspension was announced.

The UCI said both had been banned for the use of prohibited methods or substances “based on information received from the law enforcement authorities of Austria”.

It added both decisions can be appealed against to the relevant National Anti‐Doping Organisation and the World Anti‐Doping Agency (Wada).

The Operation Aderlass inquiry, led by Austrian authorities, is looking into blood doping, a process where athletes have blood transfusions to increase their stamina and performance, which is prohibited under Wada regulations.

Austrian cyclists Georg Preidler and Stefan Denifl admitted doping and were provisionally suspended in March, a week after five Nordic skiers were arrested, before both were subsequently banned for four years by the UCI.