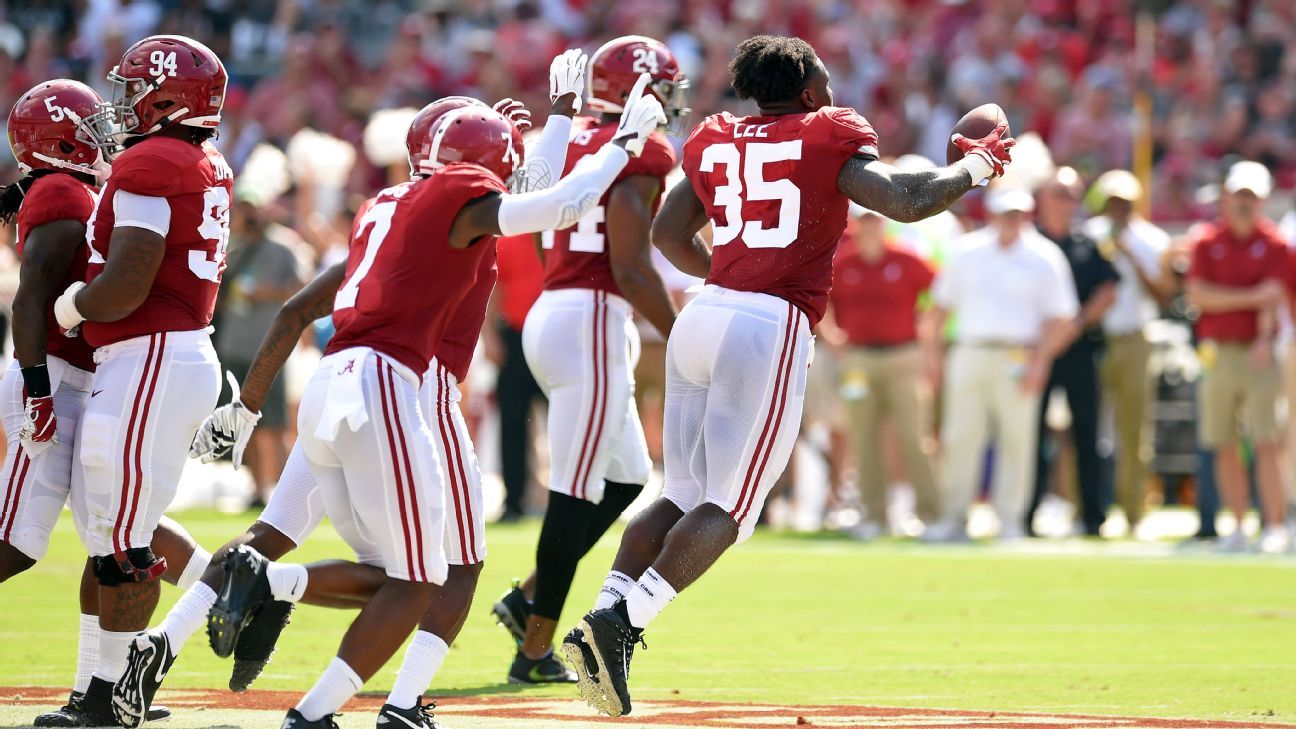 TUSCALOOSA, Ala. — It didn’t seem to matter that quarterback Tua Tagovailoa and wideout DeVonta Smith had record-setting performances. Nor did it matter that Alabama improved to 5-0 and set itself up for a return to No. 1 in the rankings. The mood after the Crimson Tide beat Ole Miss two weeks ago was decidedly not triumphant. It was kind of bleak, actually.

Yes, Tagovailoa, Smith and the offense did their thing, hanging 59 points on the unranked Rebs, but Alabama’s defense had its worst performance of the season, allowing an uncharacteristic 31 points and 476 total yards. It failed to get off the field on third down, failed to keep containment and allowed a second-string quarterback, John Rhys Plumlee, to rush for 109 yards and a touchdown.

Afterward, veterans Anfernee Jennings, Raekwon Davis and Xavier McKinney let their feelings be known about the defense’s sloppy play. With each scowl and huff and nod to misplaced focus and poor tackling, their disappointment showed. McKinney said “it’s frustrating,” and Davis said it was a “terrible game” that he took personally.

It was not the so-called “Bama Way” that coach Nick Saban preached about all offseason. It wasn’t disciplined or playing with an edge. If anything, the defense looked like a potential Achilles’ heel for a team with otherwise genuine playoff aspirations.

“We play to a standard that’s always been around here. It’s been around here for years,” Davis said after the Ole Miss game. “And today we didn’t have the focus of that mindset to play to the Bama standard. I feel like it was a lack of focus, too many penalties, we didn’t execute plays, too many missed tackles, a lot of things.”

Although there were a lot of things to which one could attribute those lapses, one stood out among the rest: growing pains.

“You definitely know we have a young defense,” Jennings said.

Youth can be an overused excuse in college football, where roster turnover is a fact of life, but even the most hardened skeptic would have to acknowledge the unusual upheaval Alabama’s defense has faced. Before the season opener against Duke, Alabama’s starting inside linebackers, senior Joshua McMillon and reigning Butkus Award finalist Dylan Moses, suffered potentially season-ending injuries. A few weeks later, defensive lineman and preseason All-SEC pick LaBryan Ray went down.

Heading into Saturday’s game against Texas A&M, there will be four true freshmen starting on defense, and only one of those, defensive lineman DJ Dale, was scheduled to start before the start of the season. Defensive lineman Justin Eboigbe and inside linebackers Shane Lee and Christian Harris have also been forced into action ahead of schedule, with mixed results.

The quartet of former four-star recruits has at times flashed the ability that made them such sought-after prospects. Dale has impressed coaches and players with his quickness and power. Davis has lauded Eboigbe’s quick-twitch ability and how he’s “ready to show the world he can play big-boy football.” For the most part, Lee and Harris have received better than passing grades for what Saban has called their “on-the-job training.”

It was a matter-of-fact statement in tone and substance, and it underscored the precarious situation Alabama faces as it heads into the second half of its schedule, which begins in earnest with a trip to No. 24 Texas A&M on Saturday and will later feature No. 5 LSU and No. 12 Auburn.

Saban, who is in his 24th season as a college head coach and is nothing if not averse to hyperbole, said he has never experienced anything like this defensive youth movement.

“We’ve had some unfortunate bad luck or whatever you want to call it, losing players at certain positions,” Saban said. “A couple inside ‘backers, a defensive lineman. So these guys have been pressed into duty before we thought they would, and we’re working hard to get them to gain the confidence they need to play well on a consistent basis.”

To do so, they’ve been toeing the line in some respects. While trying to uphold the Alabama standard of the past, Saban and his staff have worked to simplify the defense to accommodate the younger players. “It can be a little limiting at times,” Saban said, but it’s also necessary.

Along those same lines, the message from Saban and most veterans on defense has struck a more optimistic tone. Referencing the leadership of Jennings and McKinney, Saban said he has been pleased with how they’ve impacted the “players on the team who probably need their support.” McKinney said it’s their job to build up the young players’ confidence, which can mean working with them on the side or even getting in on the celebrations when they do something correctly.

Was that the case when McKinney started in Tuscaloosa?

“Not too much,” he said. “But I mean, I’ve always had my confidence, so I didn’t really need anybody to help me kind of build that for me.”

This is a unique situation. Although the Ole Miss result left Davis, Jennings and McKinney dejected, they didn’t go overboard. Davis said penalties were “killing us.” Then, a few moments later, when he was asked about the freshmen, he struck a more conciliatory tone. “Games like this, this is where you grow, and this is where you learn from your mistakes,” he said. “They still have a lot of learning to do.”

The Ole Miss game might have hurt the pride of some players and coaches, but there’s a silver lining: At least the injuries happened early in the season rather than late, giving the freshmen time to develop and sort things out while Alabama’s strong offense carries the team.

“The season don’t stop right here,” Jennings said. “We still have a lot of room to improve, so we’re going to attack our weaknesses, get back to work next week, and we’re going to fix this.”