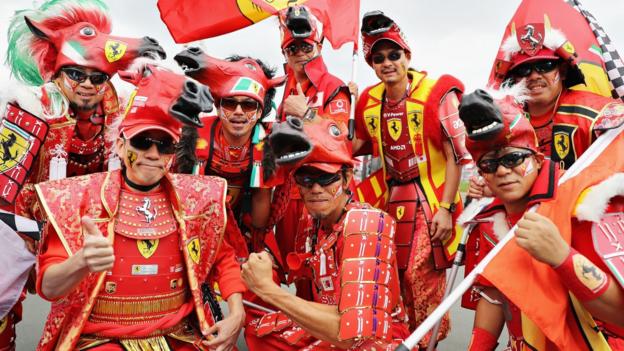 While Ferrari are feuding, Lewis Hamilton is cruising.

The five-time world champion edged even closer to his sixth title with a gifted victory at the Russian Grand Prix after a virtual safety car cost Ferrari’s Charles Leclerc the lead.

Mercedes technical director James Allison called Hamilton’s victory “deliciously ironic” and with Sebastian Vettel’s defiance of team orders intensifying the battle for supremacy at Ferrari, it seems all the Silver Arrows have to do is just sit back and capitalise on their rivals’ mistakes.

Sochi was Hamilton’s first win in four races and Mercedes’ first one-two finish since the British Grand Prix in July.

Team-mate Valtteri Bottas is still within reach to mathematically stop Hamilton claiming the championship, although another big result for the Briton in Japan and he could well be crowned champion in Mexico for the third year in a row.

The constructors’ championship, on the other hand, can be wrapped up at this weekend’s Japanese Grand Prix.

If Hamilton and Bottas claim another one-two for Mercedes at Suzuka, they too will secure their sixth world title – and equal Ferrari’s best run in the process.

Max Verstappen’s words about the beloved Japanese circuit are echoed by just about every driver in Formula 1.

Designed by Dutchman John Hugenholtz in the 1960s as a test track for Honda, the original drawings saw the track pass over and under itself a full three times. The first sector is considered one of the most challenging tests a driver can face. The snaking corners of the Esses demanding maximum speed and no rest in concentration.

The attention to detail continues through the tricky Spoon Curve, which is often described as the most technical corner on the calendar. Haas’ Kevin Magnussen said: “It’s really, really fast and you can have a lot of oversteer and front-locking.”

A drivers’ best chance of overtaking comes at the tight chicane at the end of the lap. Navigate the braking zone with measured aggression and bounce off the kerbs in the right way, and you can bid ‘sayonara’ to your nearest rival. “When you get it right, it feels pretty good.” Daniel Ricciardo once said.

Then, there are the fans.

If any drivers feel a little left out by the love Verstappen receives from the Orange Army in Europe, or the sea of red and black Ferrari flags the tifosi wave in honour of Sebastian Vettel and Charles Leclerc, then the Japanese supporters will show you some love.

From fans decked out in full race suits, paddle boards adorned with obscure backmarkers, to elaborate hat designs of a DRS front wing. Even Hamilton’s two bulldogs Roscoe and Coco are showered with affection here.

And with four Honda-powered cars enjoying a good run of form this season, expect double the amount of highly enthusiastic cheering for the Red Bull and Toro Rosso quartet.

What’s the form guide for Japan?

Hamilton may feel Ferrari have the upper hand going into the final five races, but the Mercedes man can draw level with Michael Schumacher on race wins at Suzuka if he takes victory this weekend.

Seven-time world champion Schumacher recorded six victories at the circuit, with Hamilton celebrating his fifth at last year’s Japanese GP with a with a lights-to-flag win.

Mercedes boss Toto Wolff has confirmed the team will bring an upgrade to the track this weekend. “There will be a little thing in Suzuka that we are just interested to explore,” Wolff said. “But not the big steps that we had when we pushed very hard until the summer.”

Singapore Grand Prix victor Sebastian Vettel has four wins in Japan, with each of his victories taken with former team Red Bull between 2010 and 2013.

If either the German or team-mate Charles Leclerc takes the chequered flag for Ferrari, it will be the Scuderia’s first win at the track since Michael Schumacher beat his brother Ralf in the Williams from pole position in 2004.

For Monegasque Leclerc, converting superior pace in qualifying on Saturday, and not falling victim to overcomplicated team orders on Sunday, will be top of the agenda.

The 21-year-old has been polesitter four times from Spa to Sochi and is aiming for a fifth consecutive front-row spot at Suzuka.

The omens look good for Leclerc to do what he did at the Belgian and Italian grands prix, as the last three races in Japan have all been won by the man on pole position.

If Leclerc claims another pole this weekend, it would mean he is closing in on a special record held by Brazilian legend Ayrton Senna.

Three-time world champion Senna – and two-time memorable winner in Japan – secured an unprecedented eight pole positions in a row, starting at the 1988 Spanish Grand Prix and continuing all the way to the United States Grand Prix in 1989.

BBC Sport has live coverage of practice, qualifying and the race, across the website and BBC Radio 5 Live. There will be live digital coverage on the BBC Sport website and app – including audience interaction, expert analysis, debate, features, interviews and audio content.

You can follow all the action and the latest news on the BBC Sport F1 page and via the BBC Sport app, and catch up with analysis and interviews with the BBC Radio 5 Live Chequered Flag podcast.