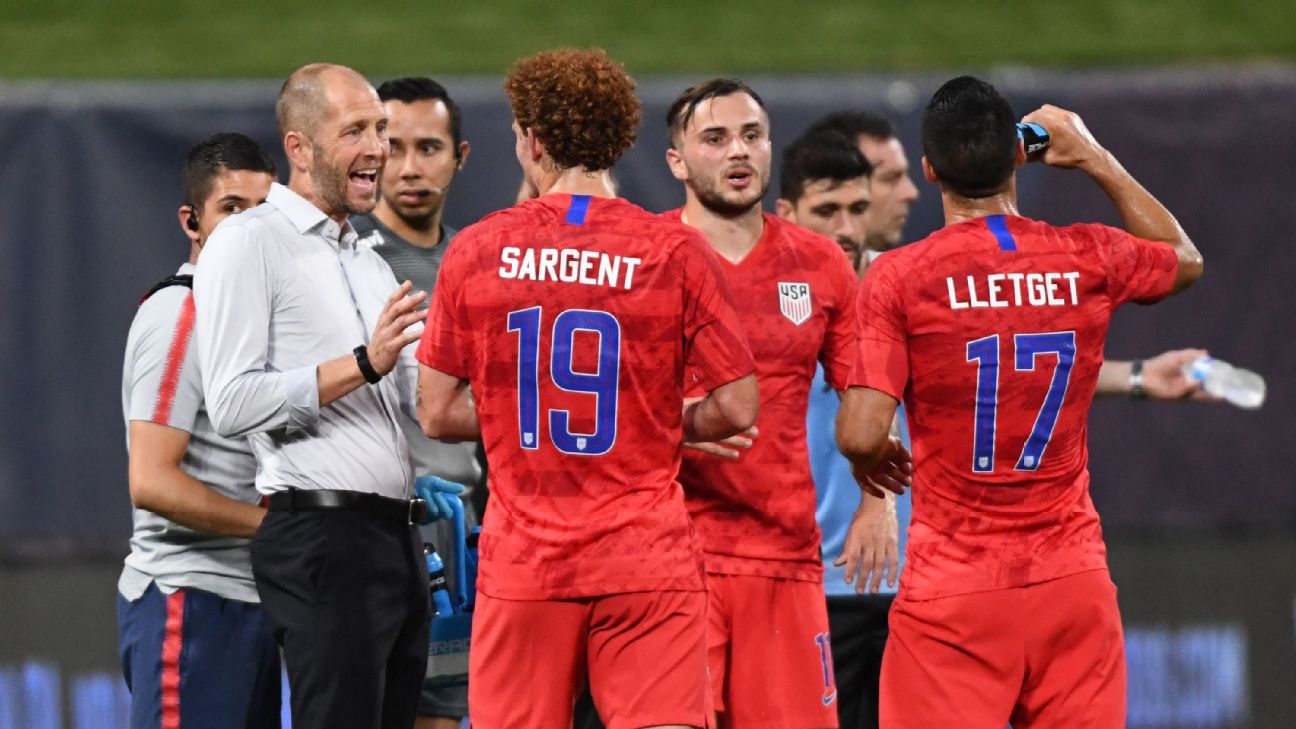 ST. LOUIS, Missouri — Another game, another opportunity for the United States men’s national team to continue building towards “Berhalter-ball.”

This time out, the forward progress was more apparent in the scoreline. Four days after falling 3-0 to Mexico in New Jersey, Gregg Berhalter’s squad tied Uruguay 1-1 at Busch Stadium in St. Louis, thanks to Jordan Morris‘ late goal off a deflected clearance attempt.

“Overall, I think it was a good step for this group to be able to play a game like this,” the U.S. head coach said after the match.

The visitors, however, did the red, white, and blue a favor by sitting back and not pressing, letting the U.S. have nearly 60 percent of the possession and, on balance, the slightly better of the goal-scoring opportunities.

“Today, it wasn’t a high-pressing team,” center-back Aaron Long, one of four players to start both matches, said. “[We were able] to have a bit more of the ball and to be able to manipulate them. I think we created a good amount of chances.”

Still, it was La Celeste scoring first with a lightning quick counterattack — LAFC’s Brian Rodriguez easily beating Brad Guzan on a full-field move that showed the quality the South American side could bring to the game when they wanted.

“To be honest, I wasn’t happy with our defensive transition today,” Berhalter admitted afterwards.

Morris found an equalizer, cresting in a simple chance.

“This one was a little bit nerve wracking,” the Seattle Sounders winger said. “When they are that easy, thoughts go through your head.”

But again, like pretty much every other fixture during Berhalter’s short tenure, this was a match designed to evaluate the player pool. That, more than the result, was the goal.

“In these games, we’re learning how each other play,” teenage forward Josh Sargent said. “Games like this definitely help.”

While neither scoreline this week favored the U.S., the youth movement showed promise. Sergino Dest, Paxton Pomykal and Miles Robinson all officially graduated from the youth ranks to the senior team. Reggie Cannon and Sargent showed their case to start. Tyler Boyd, who flubbed a sitter from Morris cross that would have opened scoring in the 22nd minute, added his name to the small list of Americans who can beat a defender one-on-one. Jackson Yueill, in his first cap, showed his ability of the half-turn and enough defensive awareness to survive.

There’s a larger story, too. A little less the two years after (trigger warning) Couva — and in the same summer that the American women’s national team earned the love of millions — the U.S. men are battling to win back the hearts and minds of the fanbase. It’s a match-by-match process.

“We’re focused on changing the way that America views soccer,” Cannon said a few days before playing Mexico. “And every step, every game is an opportunity to do that.”

The best way to do that would be to play attractive, winning soccer, and to have fun doing so. This is Berhalter’s challenge, and his challenge to his charges.

That didn’t happen against Mexico and, while Uruguay was better, it was far from perfect. There was too much rigidity, too much tentativeness, too little finishing. But the coach thinks it can, thinks they are getting closer, and thinks his players are good enough to succeed if given time. He’s instilled that belief in his players, too.

“There’s a lot of room to improve, but I think it was a good step forward,” Long said. “[Against Mexico] we didn’t waver in our playing out of the back. Obviously it wasn’t perfect but to take that into this game. We could have played long and we didn’t and it felt better.”

Maybe Berhalter is wrong. Maybe he doesn’t have the talent to play the style he wants. Maybe the U.S. won’t be able to play from the back, to disorganize the opposition with possession, or go around them another way if they press. Maybe they’ll always look like they did against Mexico: A step slow, a half-second late, just not good enough.

But if he’s wrong, most everyone in American soccer is, too. What Berhalter is trying to build is what the masses demanded during the Jurgen Klinsmann era (and before that).

Berhalter has made, and will continue to make mistakes: The reliance on Wil Trapp and Gyasi Zardes, the occasional tactical inflexibility, and more. There is a larger goal, and, he’s betting, the talent to accomplish the task (not to mention the message it sends to younger age groups of how the senior team wants to play).

In October, the Americans start their Nations League participation. It’s a silly tournament. It’s also a real one, something that matters. The U.S. is paired in a group with Cuba and Canada, two teams they should beat easily. Those four games won’t be graded on a curve like the last two friendlies; they’ll be pass fail. Winning with a possession-based, proactive style would be an indication that Berhalter is building something good, something that can morph into something great.

During the dying stages of the match against Mexico, a sweet Sebastian Lletget pass found a streaking Morris, who was taken down for a penalty shot. Sargent stepped up to take the spot kick, only to see his weak effort saved by Jonathan Orozco. Rather than sulk, the teenage forward owned his mistake and vowed to keep coming.

“It happens in football, you know?” Sargent said after the match. “I’d step up again and take it. It’s not the end of the world.”

In the late stages of the first half against Uruguay, the forward went up for a cross in the box. He won the header and sent it toward goal, but an Uruguayan defender deflected it with his hand. Costa Rican referee Ricardo Montero missed the call, only to come to Sargent at half time and apologize, saying it should have been a penalty. Too little, too late, of course, but would Sargent have taken the spot kick?

Say what you will about this group of Americans, but they don’t quit.

One son killed, another in the Super Bowl: How a football family is coping with tragedy
New Mets manager Rojas ready to ‘work tirelessly’
Hamilton has weak points others do not exploit – Alonso
AB turns himself in to police on multiple charges
Paralyzed hockey player lands job with Kings