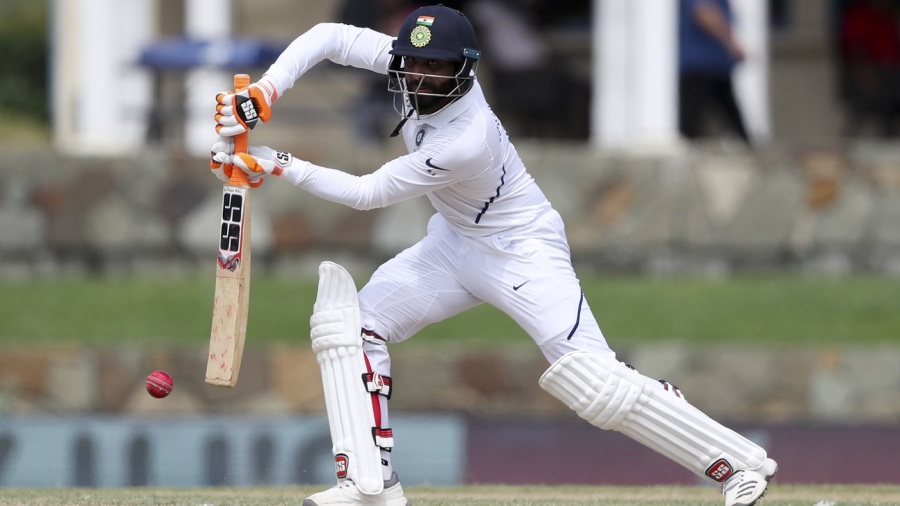 What India’s top-order couldn’t do on the first day, their eighth-wicket partnership did expertly on the second morning of the first Test against West Indies.

Ravindra Jadeja (58) and Ishant Sharma (19) frustrated the hosts for the majority of the session, putting on a 60-run eighth-wicket stand before the latter’s dismissal. Their effort played a big role in helping India score 297 in their first innings, with the visitors adding 91 runs before being bowled out in the extended first session.

Starting the day on 203 for 6, overnight batsman Rishabh Pant (24) was the first man out, falling in the day’s third over to Roach. The bowler’s natural angle, going away from the left-hander, found his outside-edge while attempting a drive, taken by second slip.

Thereafter, Ishant bunted balls that were aimed at the stumps while leaving those that weren’t, collecting what he could. From the other end, Jadeja dealt in singles and twos while collecting fours when the opportunity to free his arms arrived.

The day’s first boundary came from Jadeja, driving Kemar Roach through gully. When Jason Holder went around the wicket, Jadeja was fairly defensive up until he was offered a short ball wide outside the stumps. Jadeja crunched that through point, indicating that the new ball was easier to score off. When Roach looked to cramp him for space with a short ball, he swiveled to drill a pulled-shot to deep midwicket.

The short ball, however, was not so easy for Ishant, although he did play at them with soft hands. He was often the victim of deliveries aimed at his mid-riff, and many balls from Holder came off his glove or bat-handle. A few even fell marginally short of square leg. Ishant finally fell to Shannon Gabriel, dismissed by a slow yorker outside the stumps. Ishant did manage to dig the ball away, but with it rolling onto his stumps, his brave innings had an anti-climactic end.

That brought in No. 10 Mohammad Shami, but he lasted just one ball, chipping a full delivery back to the bowler Roston Chase. With last man Jasprit Bumrah for company now, Jadeja changed gears immediately, slapping Gabriel past the slip cordon for stamp his intent. Shoddy glovework didn’t help West Indies either; they conceded two bye-boundaries off back-to-back overs as India crept went past 280.

After Bumrah survived 11 balls without much drama, Jadeja reached his 11th half-century by cutting Chase through point as the session went into the extra half-hour. Playing as the designated spinner in a team that also has no allrounders, Jadeja played a near-chanceless innings up until his landmark. The next ball, Jadeja swept Chase for the Test’s first six. Two overs later though, Jadeja tried pulling Holder but sliced it to the wicketkeeper. That brought the curtains down on a miraculous recovery that began after India were reduced to 25 for 3 within the first hour of the Antigua Test.