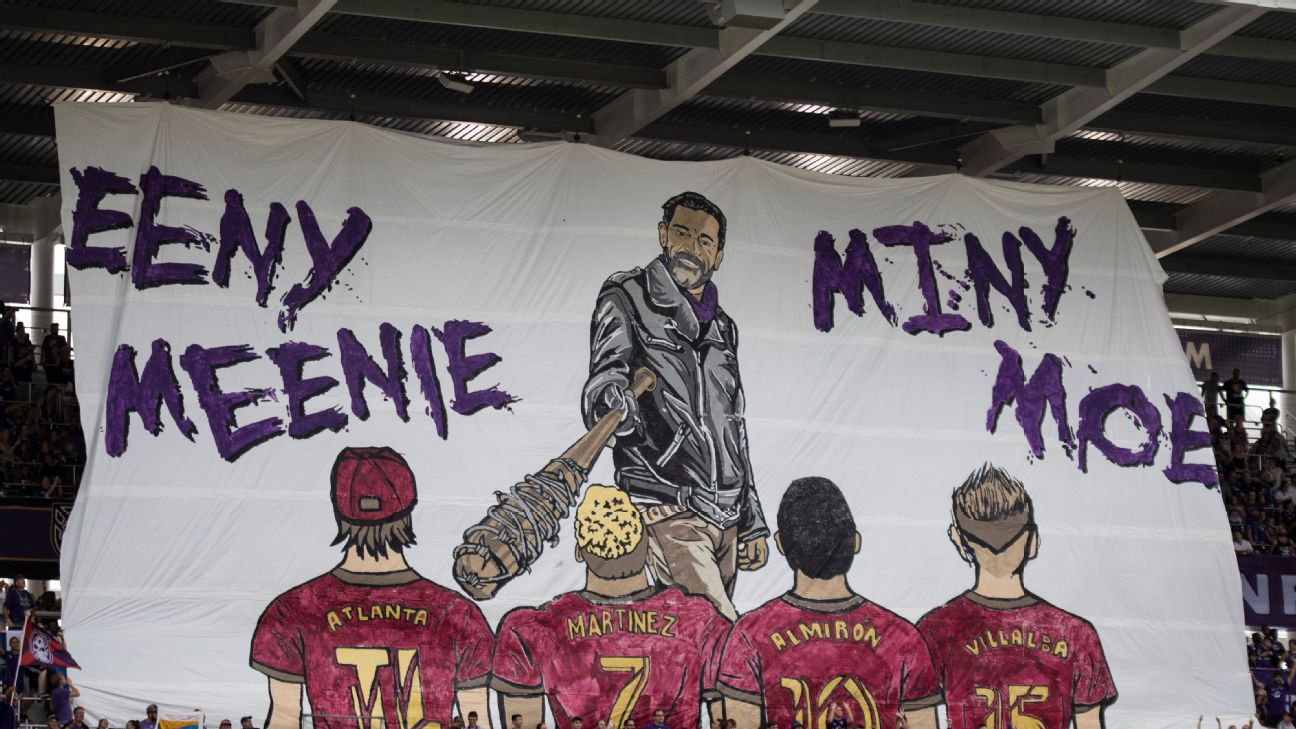 The heckling was next level.

Here was Atlanta United goalkeeper Brad Guzan, attempting to do his bit for the MLS All-Stars against Spanish giants Atletico Madrid. But even though he was ostensibly playing for the home team, the fans in Orlando’s Exploria Stadium were having none of it.

The game clock had barely hit three minutes when the first “F— you Guzan!” was picked up by a hot mic. Every touch was booed, and every goal kick was met with “You suck a——!” About the only good news was that given the exhibition nature of the match, Guzan’s night was over after 30 minutes, at which point it was Atlanta teammate Josef Martinez‘s turn to be the hecklers’ target.

— MLS fan experience: See and hear MLS like never before

“I figured it would happen since we were in Orlando,” said a bemused Guzan about the abuse he took. “It didn’t surprise me, to be honest.”

Such is the norm these days between Orlando City and Atlanta United, who will square off this Friday at 8 p.m. ET on ESPN/ESPN3 during MLS Rivalry Week. While encounters such as Portland Timbers vs. Seattle Sounders (Friday at 10 p.m. ET on ESPN), New York Red Bulls vs. New York City FC (Saturday at 7 p.m. ET on ESPN 2) and LA Galaxy vs. LAFC will garner more attention, the Orlando vs. Atlanta tilt will carry its own share of intensity and invective. Atlanta is keen to solidify its hold on first place in the Eastern Conference, while the surging Lions are attempting to climb back into the playoff places.

Whether it amounts to a tried-and-true rivalry is open to interpretation. Sure, there’s the geographic proximity, at least relatively speaking. At present, Atlanta and Orlando are the only two MLS teams that can call the southeast region of the United States home. While the two cities are a seven-hour drive apart, the next closest team to Atlanta is D.C. United, which is about 630 miles to the northeast.

Time isn’t on the side of calling this a rivalry, however. Atlanta is only in its third year of play, while Orlando is in year five. There simply haven’t been that many opportunities for there to be give-and-take on the field. The matchup has also been completely one-sided so far, with the Five Stripes winning six times and drawing twice in all competitions, including last month’s U.S. Open Cup semifinal victory in Orlando.

Yet the intensity from the fans is there.

“I don’t know if rivalry is the right word,” said Michael Collier, the capo (chant leader) for the Atlanta supporter group, the Terminus Legion. “But we definitely take up a lot of rent space in their heads.”

On the other hand, Carlos Alvarado, president of the Orlando supporter group, the Iron Lion Firm, believes the “r-word” is appropriate, adding, “It’s become a really poisonous rivalry.”

You have to go back to a preseason tournament in 2015, in Charleston, South Carolina, of all places, to see where the enmity began. Orlando was prepping for its first season in MLS while Atlanta’s expansion intentions had been announced the previous year, and it would be another two seasons before the Five Stripes took the field. With that in mind, a group of intrepid Atlanta fans thought it was time to take their first road trip to that year’s Carolina Challenge Cup, especially with former Atlanta Silverbacks attacker Kwadwo Poku suiting up for one of the participants, New York City FC. Orlando City was among the teams taking part.

When the Atlanta fans left some of their flags and banners out following their pregame tailgate, their Orlando counterparts saw an opportunity to claim some trophies, and did just that.

“They wrote in purple chalk on the pavement, ‘Thanks for the trophy,'” said Collier. “They even hung the banner that they stole inside their stadium the first time we played them down in Orlando. They really didn’t like us, so we didn’t like them. They’ve been angry at us the whole time, and we just back it up by being able to beat them.”

Once Atlanta took the field for real, matters escalated. Prior to the first regular-season meeting between the two teams, Atlanta rented a billboard in Orlando that read, “Orlando, We’re Coming to Conquer.” The move was widely viewed as Atlanta’s front office trying too hard to generate a rivalry. It worked though. Alvarado recalled that the billboard was “mysteriously tagged” with the phrase “”F— ATL, ILF [Iron Lions Firm], WE ARE HERE.” The billboard was taken down a day later.

“The rivalry has been short-lived, but there’s been a lot of shenanigans so far,” said Alvarado.

For the return fixture in Atlanta the following week, a communication mix-up in terms of Orlando’s ticket allotment saw the visiting fans not get as many tickets as they wanted. During that match, a 1-1 draw, some bleachers in Bobby Dodd Stadium were damaged and three Orlando City fans were arrested. Alvarado is of the opinion that the damage took place because the Orlando section was overcrowded, and that the arrests were over the top. The charges against all three individuals were eventually dropped, though the Orlando City front office suspended its supporters groups from the next four away Atlanta United matches.

“There’s genuine dislike towards Atlanta and their front office,” said Alvarado. “Not because of the success they’ve had, nothing like that, there’s just a lot of bad blood from that first trip we had. For us, that set the tone for everything.”

Of course, the tit-for-tat battle continued into the 2018 season, with Orlando City suspending the Atlanta United supporters groups’ privileges, after the Atlanta front office didn’t identify the fans who had allegedly thrown garbage onto the field during a game on May 13 of that year.

For a league that loves its rivalries, its juicier conflicts have proven to be oddly disposable over the years. Matchups like the Red Bulls and D.C. United, as well as the LA Galaxy and the San Jose Earthquakes — home to some of the more epic encounters in the league’s first decade — have been shunted aside in favor of intracity encounters. There is every chance that could happen with Atlanta and Orlando City before the rivalry can really take root. When Nashville enters the league next season, it will provide Atlanta with a team in closer proximity. The same will be true for Orlando with Inter Miami CF coming on board.

“Just talking to the Atlanta fans that I know, we’re really looking forward to the Nashville team coming in, just because it’s going to be a fun game to go to; easy to get to, and Nashville is a fun city,” said Collier.

“I think when Miami starts up there’s going to be this desire to have an in-state rivalry,” said Alvarado. But he also notes, “Things have to develop naturally.”

That may be where the Atlanta/Orlando matchup has an advantage. The intensity is there, and the rivalry window remains open. Of course, Orlando at some point needs to gain a victory on the field.

Maybe that will happen Friday and push the matchup firmly into rivalry territory.