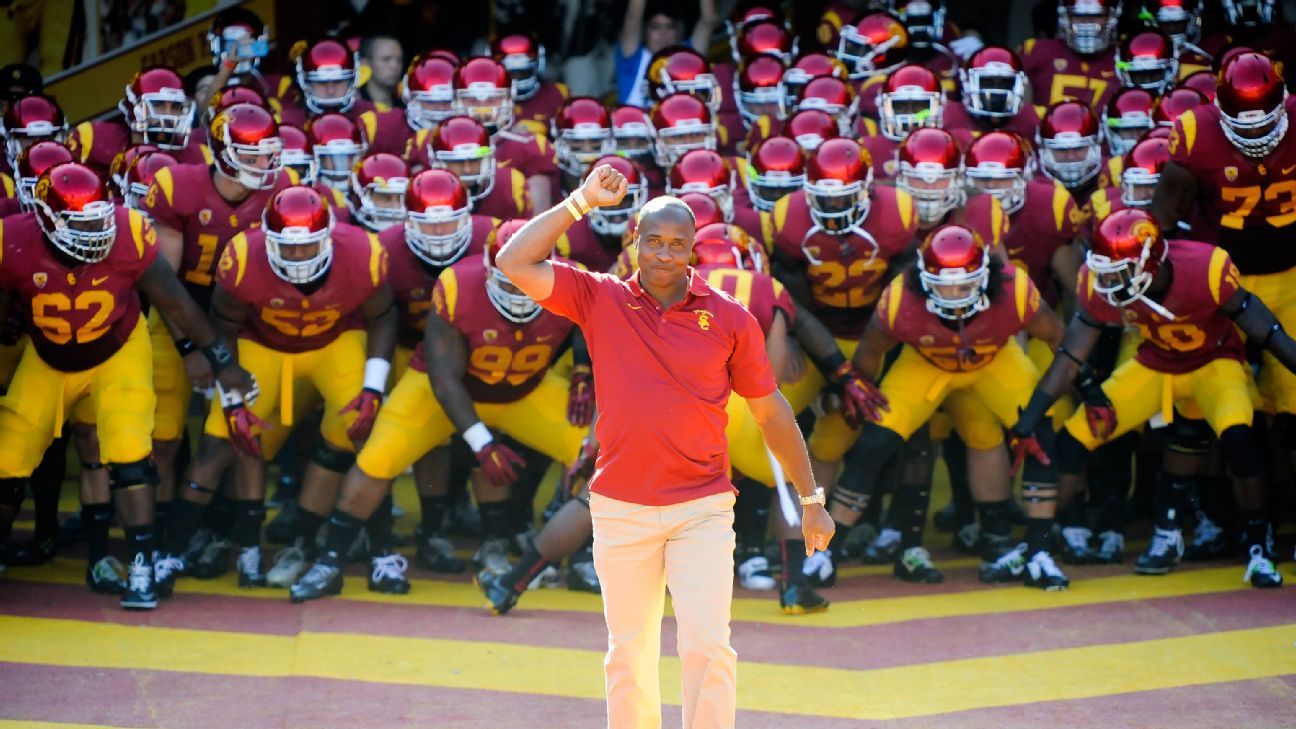 LOS ANGELES — After a disappointing 2018 season, USC Trojans athletic director Lynn Swann said the expectation is for the program and coach Clay Helton to win a conference championship in 2019.

“The expectation is that we’re going to win the Pac-12 championship,” Swann said after Thursday’s ribbon ceremony for the recent renovations at the Los Angeles Memorial Coliseum. “We want to be in the picture and the conversation about the national championship, on the national scene. That’s where it starts.

There has been growing speculation about Helton’s job security since going 5-7 last season — the first losing season for USC since 2000. Helton made sweeping changes to his coaching staff before the spring, including hiring former North Texas offensive coordinator Graham Harrell. He also has decided to run simplified versions of both his offense and defense in order to help guys play faster.

Helton took over USC’s football program as the interim coach in 2015 after Steve Sarkisian was fired. After guiding the team to the Pac-12 championship game that season, Helton led the Trojans to a Rose Bowl title in 2016 and the Pac-12 title in 2017.

Despite growing frustration from USC’s fan base, Swann gave Helton a public vote of confidence in November when he announced that Helton would return in 2019. Swann again stood by his coach Thursday, but he said it will take more than just Helton’s efforts to get the program back on the right track.

“I have confidence in everybody who’s out there,” Swann said. “Clay’s not going to do it by himself. He’s got a great coaching staff, people he feels comfortable with. They’ve got to give the kids a great game plan, give them the confidence, give them the tools to be able to go out and execute and play great football. We’re looking forward to it.

“You’ve got a lot of young men who played on that team last year who have a bad taste in their mouth. You hear Clay talk about that all the time — leaving that bad taste in your mouth and wanting to get rid of it. They want to get back and prove that they’re better athletes and a better team than they were last year.”

To his credit, Helton, who ran more energetic and faster practice this spring and during fall camp, has said the outside negativity hasn’t affected him or his coaching. “I’ve never worried about the outside noise,” Helton told ESPN in July. “Having been in it for 25 years of college football, having seen my dad in it for 40 years in both NFL and college, it’s part of the game. As a leader and as a head coach, when you go win a Rose Bowl and a Pac-12 title, you go hand out the accolades to everybody else. When you have an off season, you have to own it.

“You have to understand your job as a coach. It is not to worry about what’s going on outside of the team meeting room. You have to focus on doing your job and not what everybody else thinks. If you do, you’re not going to reach your full potential.”

Swann and Helton were both on hand Thursday to welcome many from the USC and Los Angeles community to the newly renovated LA Coliseum. USC used DLR Group to design the renovations, which cost $315 million and didn’t require any public funds.

The renovations include new fan amenities, cup holders in place throughout the stadium, seating upgrades, game entertainment improvements and premium hospitality spaces. A new technology infrastructure has also been built, highlighted by a complete stadium-wide Wi-Fi system. A new seven-story Scholarship Club Tower was also built on the stadium’s south side. It has a ribbon video board, suites, 24 loge boxes, 1,100 club seats, a new and wider concourse, new concession stands, a new press box, and the rooftop 1923 Club, which has a 360-degree view of the Los Angeles basin.

“To walk into this place of history that’s been established since 1923 and to be able to see this amazing facelift was just tremendous pride,” Helton said. “USC is a place of excellence and Los Angeles is a place of excellence, and to be able to do a $315 million renovation and now basically have what I think is the greatest college stadium in the country is special, and we can’t wait to play in it.”