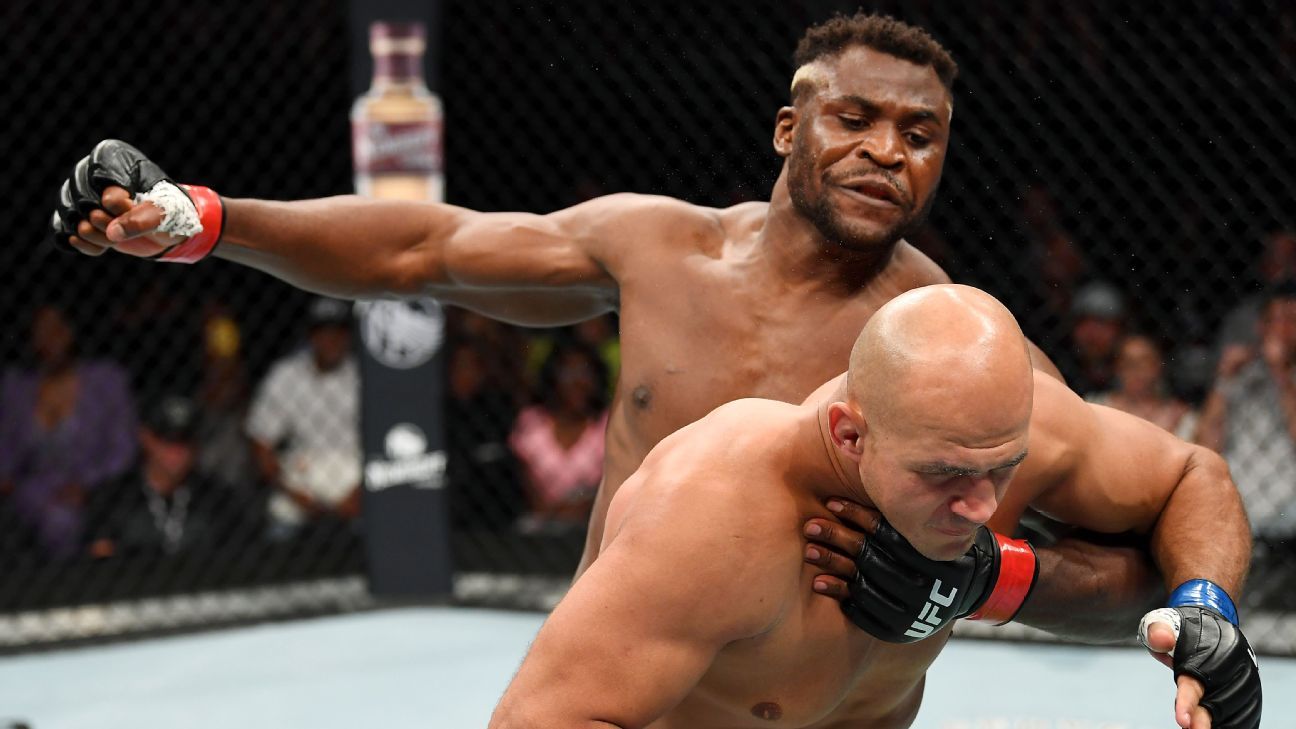 Francis Ngannou, you have our full and undivided attention once again.

Ngannou (14-3) was the most feared heavyweight in the world going into 2018, but a five-round loss to then-champion Stipe Miocic that January (followed by a complete no-show against Derrick Lewis later that summer) had “The Predator” looking very human.

Well, it’s safe to say “scary Ngannou” is back. The French-African heavyweight demolished former champion Junior Dos Santos in 71 seconds at UFC Fight Night on Saturday in Minneapolis, good for his third first-round knockout in a row.

What’s next for Ngannou, Dos Santos and the other big names of UFC Fight Night? Here’s ESPN’s take.

Next: Winner of Daniel Cormier vs. Stipe Miocic on Aug. 17

UFC president Dana White was non-committal to a Ngannou title shot on Saturday, saying he needs to see how things play out. And it is true: There is a lot to sort out at heavyweight. What happens in the Cormier-Miocic rematch? Will Cormier retire immediately after? Assuming Jon Jones is still light heavyweight champion, does he fit in?

These are valid questions, and the UFC is fond of keeping its options open — but come on, all roads lead to a Ngannou title shot at this point, don’t they?

Let’s play the options out. Cormier wins on Aug. 17 and retires: Ngannou vs. Jones for the vacant heavyweight title, please. Miocic wins: Ngannou vs. Miocic 2, obviously. Cormier wins and decides to fight again: At this point, I’d rather see Cormier fight Ngannou than Jones for a third time. With any of these scenarios, I’m in on an Ngannou title shot.

The UFC has loaded up another pay-per-view card, featuring two title fights: Jon Jones vs. Thiago Santos and Amanda Nunes vs. Holly Holm. Also, the popular Ben Askren takes on Jorge Masvidal, with potential title implications on the line at 170 pounds.

This might be the worst, best idea I’ve ever had. On one hand, JDS vs. Velasquez 4? Why on earth would we need to revisit that now?

But the more I think about it, I lean more toward: Why on earth not? Dos Santos had won three in a row prior to Saturday, but let’s not sugarcoat things. This was a very, very bad result for the former champ. Losing in this fashion, in 71 seconds, kills any momentum Dos Santos had. And with Velasquez, no one can even provide a straight answer as to whether or not he’ll even fight again. In other words, both of these all-time greats are at a low point.

Give Dos Santos time off following the knockout, and maybe explore this idea for early 2020. It would be a nostalgic ride for longtime MMA fans, revisiting one of the best matchups in the history of the heavyweight division — and it actually would go a long way in rebuilding the winner.

This is real simple. No need to overexplain the situation. Joseph Benavidez has basically been the true No. 1 contender at flyweight for years. His career went sideways in 2013, when he suffered his second loss to the division’s dominant champion, Demetrious Johnson.

Since then, all Benavidez has done is win nine of 10 (against the best of the weight class). His only loss during that stretch was a split decision, in his first appearance after reconstructive knee surgery in 2017. And oh, one more thing — he has a win over Cejudo, from 2016.

The fact that Cejudo is a champion in two weight classes and sidelined with injury complicates things a bit, but even No. 1 bantamweight contender Aljamain Sterling has come out and said he’ll happily give Benavidez the first crack at Cejudo once he’s healthy, because he deserves it. That really tells you all you need to know.

Maia asked for Sanchez post-fight, and I can’t come up with a single reason against it. He also mentioned his next fight might be his last.

The UFC likes to book guys like Maia against up-and-comers, to give them a test and build their name. But if Maia is really looking for a retirement fight at this point, he’s earned the right to have a say in who it’s against. Sanchez faces Michael Chiesa next week at UFC 239. Win or lose, if he’s willing to face Maia next, it makes sense to me.

Add Menifield to the growing list of fresh talent at 205 pounds, which might be the most welcome development the UFC has seen in years. Light heavyweight has been in desperate need of new faces, and it’s finally getting them with the emergence of Menifield, Dominick Reyes, Johnny Walker, Corey Anderson and others.

Menifield is still relatively untested, but his potential is obvious and the level of competition he’s faced is respectable (combined record of 48-15). A top-15 opponent isn’t far off, but most of the ranked light heavyweights are already booked. Keep Menifield busy, keep giving him experience. Clark is also coming off a win earlier this month and is an appropriate next step for the undefeated Menifield.