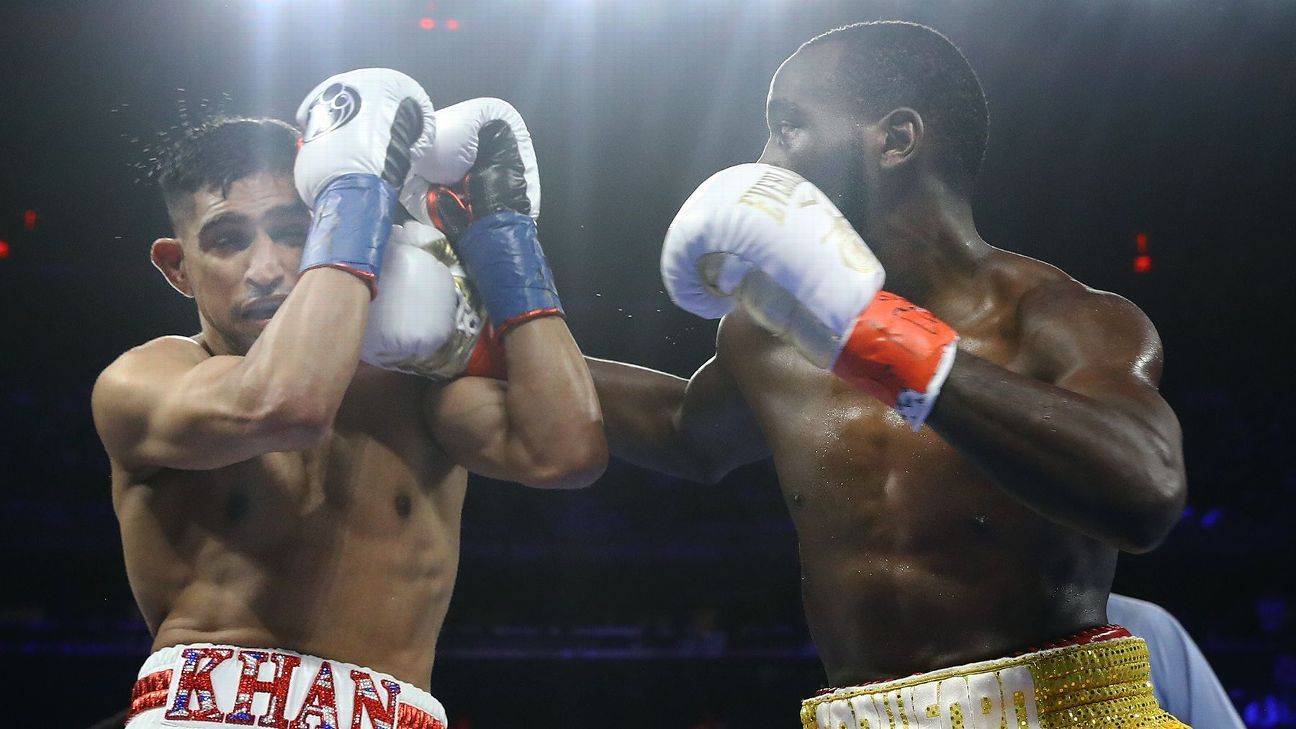 NEW YORK — The argument over who is the best pound-for-pound fighter in the world has been largely a two-man discussion between unified lightweight champion Vasiliy Lomachenko and welterweight titlist Terence Crawford, who have had a chance to make their latest statements within eight days of each other.

Last week it was Lomachenko, the three-division champion, who destroyed former lightweight titlist Anthony Crolla by one-sided, one-punch knockout in the fourth round. Crawford kept pace Saturday night at Madison Square Garden with a sixth-round knockout of Amir Khan, albeit not in the authoritative way he might have wanted it.

The fight ended in the sixth round when Khan could not continue after after an accidental low blow in the main event of the first Top Rank Boxing on ESPN pay-per-view card.

It was a disappointing ending to an otherwise strong showing from Crawford, who nonetheless did not have a chance to close his second title defense in style.

Crawford had nearly knocked Khan out in the first round. He nailed Khan with a right hand near the ear that badly rocked him and then floored him with a left hand. Khan got up quickly but was unsteady, and Crawford, normally a slow starter, was all over him.

He had Khan holding on and then caught him with more punches that nearly knocked him down again as the round came to an end.

Khan tried to move and collection himself in the second round and while Crawford was patient, he still managed to clip Khan again and knocked him off balance.

The fight became a bit of a boxing match in the third round as Crawford turned southpaw, as he often does, and looked to reach Khan with his right jab. Khan had problems getting any real offense going and seemed more concerned with protecting his chin than landing his own punches. There was good action in the fourth round when Khan (33-5, 20 KOs), 32, of England, finally began to land punches and also stood up to solid ones as well. But he also appeared to hurt his right hand.

They exchanged many punches in the fifth round but Crawford (35-0, 26 KOs), 31, of Omaha, Nebraska, appeared to hurt Khan, who took the punch and shook his head – a sure sign he had felt the shot.

Early in the sixth round Crawford landed a left hand very low that clearly hurt Khan, who was given time to recover from referee David Fields. But during the recovery time Khan still appeared to be in pain, and trainer Virgil Hunter said Khan could not go on. Fields stopped the fight at 47 seconds, leaving the crowd of 14,091 booing lustily.