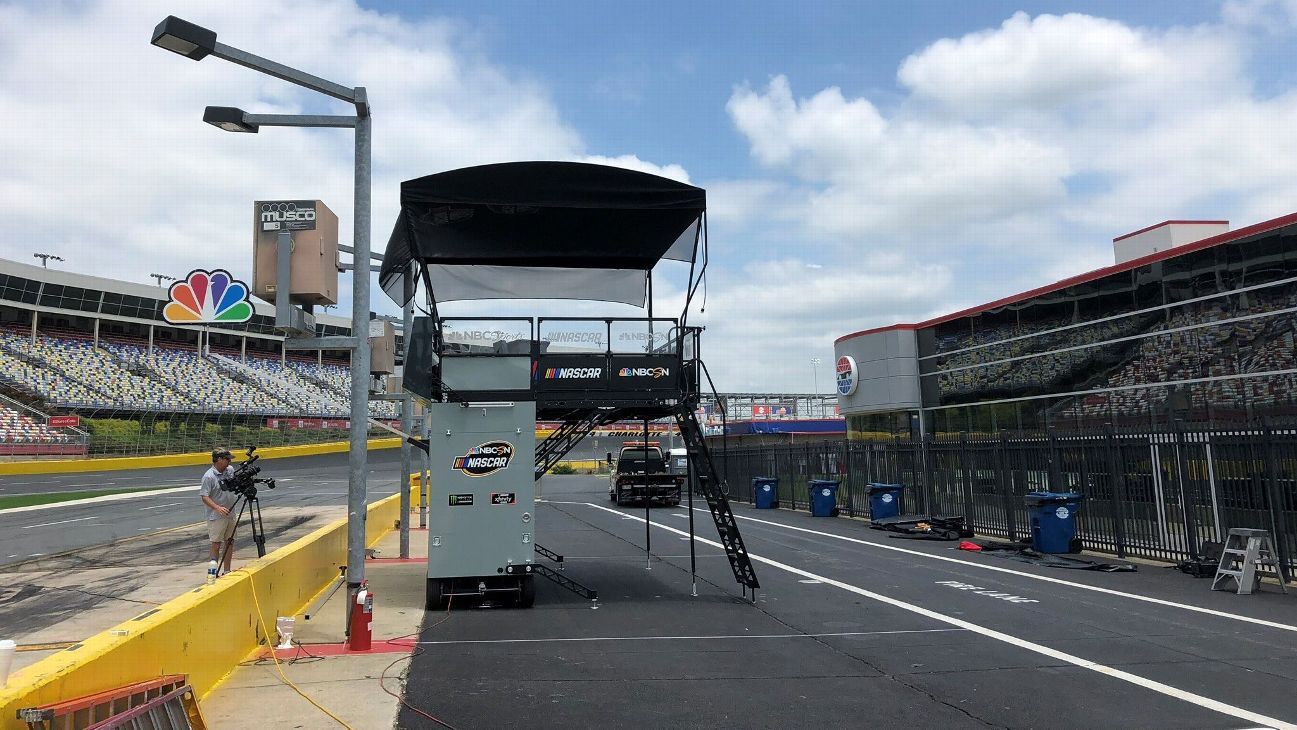 JOLIET, Ill. — One pit box won’t look like the rest on pit road during each NASCAR Cup Series race the rest of the year.

NBC’s at-track studio doubles as a pit box and will be placed on pit road during the race weekends. The network will do its prerace and postrace shows from there. Don’t be surprised to see Steve Letarte doing analysis from there as well.

For its debut at Chicagoland Speedway, the pit box is right across the start finish line on pit road next to the area where NASCAR’s cameras are set up to shoot the finish line for the Overtons 400.

Letarte knows that the location could help increase the number of interviews during the weekend. If a big name gets eliminated in qualifying in the first round, it wouldn’t be surprising to see that driver join the coverage team atop the pit box.

“If [as a crew chief] you want me to go outside up to a different location or outside to a stage, I’m going to tell my PR person to turn you down because I don’t want that distraction,” Letarte said. “If I have to get you 60 feet out of the garage, we’re going to have a whole lot more better luck.”

It took eight months to get the pit box built, and it was built by Nitro Manufacturing, which constructs most of the teams’ pit boxes.

At 14 feet by 12.5 feet, the pit box is actually quite roomy at the top, and there are places for cameras to be attached and swiveled. With plenty of screens, the bottom area of the pit box can be an area for interviews or for a reporter to do a stand-up explanation.

The monstrous pit box will certainly be noticeable as fans watch the race.

Here’s what they’ll be watching for as we break down the Overtons 400 lineup:

1. Paul Menard (Wood Brothers Racing No. 21 Ford): Menard has just one top-10 in 11 career Cup starts at Chicago. But who cares? He’s on the pole for just the second time in his career and for the first time since Daytona in July 2008.

2. Ryan Blaney (Team Penske No. 12 Ford): Blaney finished fourth in his Cup debut at the track in 2016. Starting second, he makes it a pseudo all-Penske front row as Menard drives for affiliate Wood Brothers Racing.

3. Chase Elliott (Hendrick Motorsports No. 9 Chevrolet): When is Chase Elliott going to win? Maybe Sunday. He led 75 laps and finished third in 2016 at Chicago and came back a year later and led 42 laps in finishing second.

4. Kurt Busch (Stewart-Haas Racing No. 41 Ford): He has never won at Chicago, and he seeks his first top-10 in his last three starts.

5. Clint Bowyer (Stewart-Haas Racing No. 14 Ford): He carries a ton of momentum into Chicagoland thanks to a first and a third in his past two Cup starts. But he hasn’t finished better than 13th in his past four Chicago starts.

6. Aric Almirola (Stewart-Haas Racing No. 10 Ford): He has finished between seventh and 13th in his past seven Cup starts.

7. Brad Keselowski (Team Penske No. 2 Ford): He has finished eighth or better — including two wins — in his past seven Chicago starts.

8. William Byron (Hendrick Motorsports No. 24 Chevrolet): Byron didn’t finish either of his two previous starts at Chicago, one each in Xfinity and truck.

11. Kevin Harvick (Stewart-Haas Racing No. 4 Ford): He is carrying a “Freak Yeah” paint scheme as Jimmy John’s is using Harvick to promote its new slogan. This is a good race to do it — he has top-10 finishes in 14 of his past 15 starts on 1.5-mile tracks.

14. Austin Dillon (Richard Childress Racing No. 3 Chevrolet): He probably is just looking forward to returning to the site of his Daytona 500 win next week.

15. Alex Bowman (Hendrick Motorsports No. 88 Chevrolet): He was 10th in this race in 2016 when filling in for Dale Earnhardt Jr.

16. Kyle Busch (Joe Gibbs Racing No. 18 Toyota): Busch has led 340 laps in the past five Chicago races. That sounds great, but he didn’t win any of them.

17. Ryan Newman (Richard Childress Racing No. 31 Chevrolet): He has four top-10s in his past seven Chicagoland starts.

18. Kyle Larson (Chip Ganassi Racing No. 42 Chevrolet): He is riding a two-race streak where he has finished outside the top 10. He hasn’t had a streak of three races like that all year.

19. AJ Allmendinger (JTG Daugherty Racing No. 47 Chevrolet): He’s probably still beating himself up for missing a shift and cooking the engine last week at Sonoma.

20. Ricky Stenhouse Jr. (Roush Fenway Racing No. 17 Ford): Stenhouse won an Xfinity race at Chicago in 2012, but he has just one top-10 in five Cup starts. Stenhouse had a pinched brake line after qualifying and will have to drop to the rear at the start of the race for unapproved adjustments.

22. Darrell Wallace Jr. (Richard Petty Motorsports No. 43 Chevrolet): He was 10th in the Xfinity race at Chicago a year ago.

23. David Ragan (Front Row Motorsports No. 38 Ford): Ragan typically doesn’t qualify well at Chicago — but this is his best starting spot in his past five Chicagoland starts.

25. Ty Dillon (Germain Racing No. 13 Chevrolet): He’s been stuck at 29th in the standings the past four races.

26. Michael McDowell (Front Row Motorsports No. 34 Ford): This is not a good track for McDowell, whose best finish in any NASCAR series at the track is 25th, and that was in Xfinity.

30. Kyle Weatherman (StarCom Racing No. 99 Chevrolet): Weatherman will rely on the experience of his two Cup races last year as he makes his 2018 debut.

31. Landon Cassill (StarCom Racing No. 00 Chevrolet): Cassill has been running at the finish in eight of his nine starts this year.

32. Corey LaJoie (TriStar Motorsports No. 72 Chevrolet): LaJoie has had respectable finishes of 24th, 26th and 27th in his past three starts.

33. B.J. McLeod (Rick Ware Racing No. 51 Chevrolet): He’ll make his fourth Cup start of the year and his second in the past four events.

34. Reed Sorenson (Premium Motorsports No. 7 Chevrolet): Sorenson has finishes of 30th or worse in four of his past five Chicago starts.

35. Timmy Hill (Carl Long Motorsports No. 66 Toyota): In his other three Cup starts this year, he has started 36th.

36. Martin Truex Jr. (Furniture Row Racing No. 78 Toyota): Truex has won the past two races at Chicago. No driver has ever won three in a row at the track, but he will have to win it from the back after his qualifying time was disallowed for failing postqualifying tech.

37. Denny Hamlin (Joe Gibbs Racing No. 11 Toyota): He’s probably hoping that appearing on Dale Earnhardt Jr.’s podcast will mean a little love on the track. He won this race in 2015. Hamlin is starting in the back after his qualifying time was disallowed for failing tech after qualifying.

38. Jimmie Johnson (Hendrick Motorsports No. 48 Chevrolet): Even though he hasn’t won at Chicago, this is a strong track for Johnson, who has an average finish of 9.4 and has led 695 laps. Johnson also starts in the back after his qualifying time was disallowed for failing postqualifying tech.

39. Chris Buescher (JTG Daugherty Racing No. 37 Chevrolet): Buescher has been able to qualify in the top 20 at Chicago, but he hasn’t been able to finish there. Buescher is the fourth and final driver starting in the back for a postqualifying tech failure.