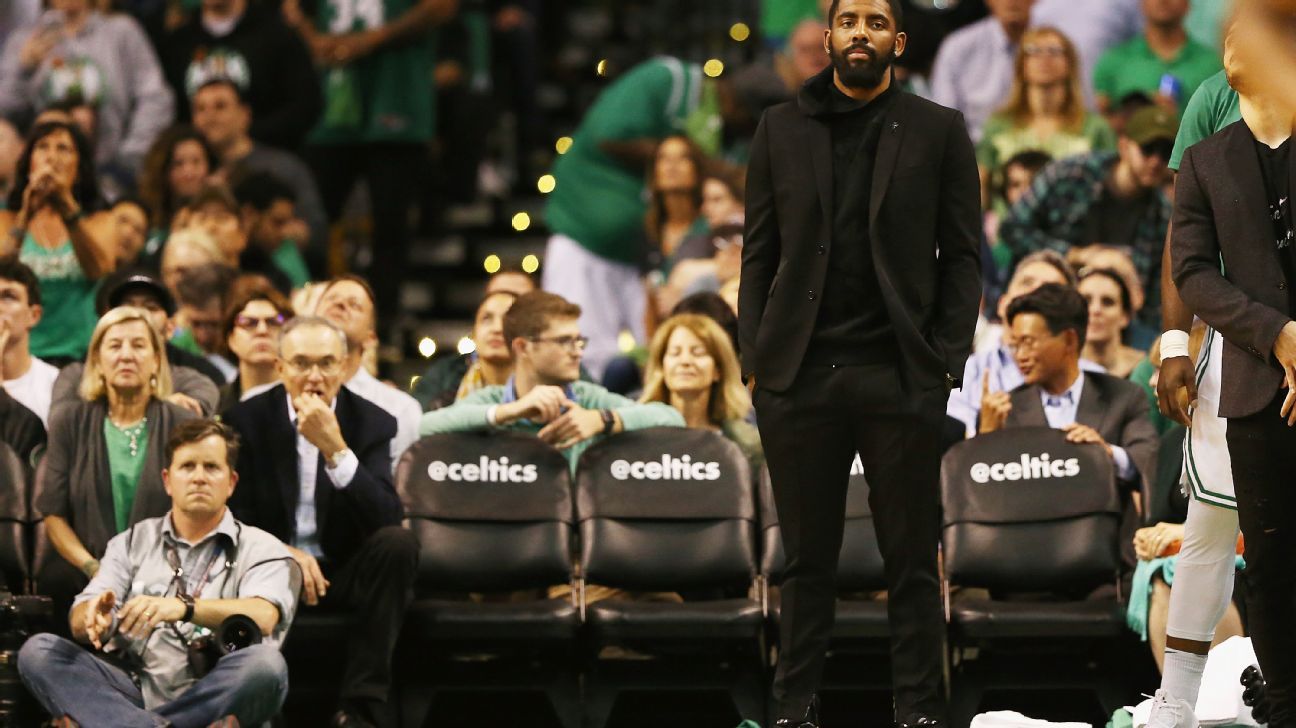 BOSTON — Celtics All-Star point guard Kyrie Irving said Tuesday that a contract extension this summer doesn’t make sense for him and that while he’s already bracing for the daily questions about his future, his sole focus is on getting healthy for next season and helping Boston take another step toward title contention.

Meeting with Boston reporters for the first time since March to cap a day spent promoting his “Uncle Drew” movie, Irving said it “sucked” to be sidelined for the postseason, glowed about Boston’s future potential, acknowledged the challenge of competing with the Golden State Warriors and said he would leave roster decisions to management when asked about the possibility — no matter how remote — of being reunited with potential free agent LeBron James.

Irving is eligible for an extension this summer but, even coming off another knee surgery that sidelined him for Boston’s improbable run to the cusp of the Finals, was adamant that he’ll wait for the summer of 2019 to examine his future.

Irving is eligible for a four-year, $107 million extension, but that would be $80 million less than what Irving could earn if he waits until the summer of 2019 and re-signs with Boston after opting out of the final year of his current pact.

“My hope is that maybe we could limit it to maybe one question a day about what I’m doing next year,” Irving half-joked to reporters. “That’s my hope. But obviously I can’t really control that.

“I think you guys can feel my attitude is really just redemption next year. Really integrating myself with our team again and really focus on winning a championship. That’s the only thing I’m really worried about. Until I get to that point, then I can’t really answer any questions. I’m pretty sure management and I will have a talk, but that talk won’t happen now.”

Later, Irving added, “The focus is solely on winning a championship next year. I don’t think [impending free agency will] necessarily have an effect. I’m doing my best to kind of deflect all that and focus on what’s in front of us.”

Wearing a gray suit and T-shirt, Irving gushed about what Boston’s young players accomplished in the postseason, especially playing without both Irving and Gordon Hayward.

“I could’t be more proud of what [Boston’s young players] experienced — I mean they went to Game 7 of the frickin’ Eastern Conference finals,” Irving said with a playful shrug.

“For me, I’m just glad everyone got to learn how special they were on a bigger stage. I’d been talking about how great [the younger players] were. Some of their numbers probably didn’t look as appealing to the outside-looker, but they were just — they were always locked in. And then when they were afforded the opportunity to take the reins of the team, you saw them take full advantage of it. You saw guys that literally are going to be stars in this league for years to come.”

Irving said his backup, Terry Rozier, proved he’s an NBA starter but that “turns into an unbelievable dynamic” for Boston next season. He raved about Jaylen Brown and Jayson Tatum, then noted how Marcus Smart gave up his body and “that’s the type of attitude and effort you’d love to be part of.”

When he referenced Hayward, Irving smiled wide and added, “and now getting my man Gordon back — I’m excited man. I’m excited.”

Irving didn’t try to deflect when asked about James and the possibility that the Celtics could be a wild-card suitor if James opts out of the final year of his deal.

Irving did note that he hasn’t had any conversations with Boston’s front office about James and said he appreciates the transparency of team brass as they map out their future vision.

Asked whether he’d be open to reuniting with James, Irving said, “In this business, I’ve experienced it all and I’ve seen a lot, so we’ll see what management decides.”

Some other highlights from a sprawling 12-minute session inside the Boston Harbor Hotel:

• Irving said he’s navigating his rehab with caution but he’s clearly aware of his target date. “Me and my strength and conditioning coach, we’re taking it one day at a time. I think around this time is probably 15 weeks until the third week in September — not that I’m thinking about it or anything — so I’m excited to just really utilize this offseason to dedicate myself to my craft and things outside of it,” he said.

• After watching the Warriors sweep his former Cavaliers teammates in the Finals, Irving noted, “The Warriors are just, they’re that great. You see in a Game 3 in Cleveland, and you see the difference on why [Kevin Durant] is so special. You see a 43, and then you see 12, 11, 10, 10, 10, 10. The year before, in playing them in 2016, they couldn’t necessarily get away with a game like that. They’ve afforded that, of integrating that team environment and now adding a very, very special player. Just a big fan of what he does out on the floor.”

• Irving said he was invigorated by the “artistic expression” of working on a feature film but admitted it was tough for him to watch the final product. “You guys know I overanalyze everything,” he said. “It was great to see it but I’m really critical of myself.”